Welcome to the Astrobites coverage of virtual events based around the cancelled American Astronomical Society (AAS) meeting! We will report on highlights from each day here, from AAS Press Conferences to grassroots astronomy community meet-ups. If you’d like to see more timely updates during the day, we encourage you to search the #aas239 hashtag on twitter. We’ll be posting once a day during the week, so be sure to visit the site often to catch all the news! 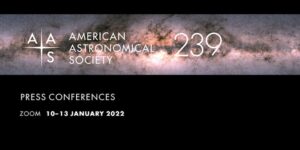 The first press conference of AAS 239 focused on galaxies and quasars, exploring topics ranging from the early universe to galaxies very similar to the present-day Milky Way. Jessica Sutter, from the Universities Space Research Association (USRA) and the airborne Stratospheric Observatory for Infrared Astronomy (SOFIA), presented mapping of ionized carbon in NGC 7331, a “twin” of the Milky Way. This [CII] emission provides a way for the interstellar medium to cool, balancing heating from hot, young O and B stars. However, the [CII] signal is affected by the region of origin, meaning that the inclination of the galaxy in question can impact observations.

Next to speak was Yuanze Luo, from Johns Hopkins University, discussing mechanisms behind quenching. “Quenching” refers to processes where a galaxy’s star formation rate decreases, largely due to a loss of interstellar gas. A central supermassive black hole may be the culprit in some cases. Luo’s team used multiwavelength observations to map the structure of the galaxy IC 860. The results showed that the galaxy had a third spiral arm, hot blue stars and potentially a central active galactic nucleus, all of which indicate it was transitioning toward quenching. The team also observed outflows, although they were too weak to actually provide a way for the galaxy to lose gas. 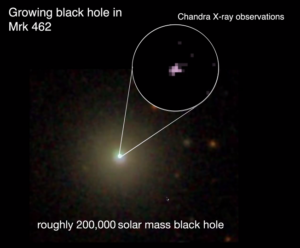 The final two speakers delved into a long-standing question in early-universe cosmology: How do supermassive black holes (SMBHs) form? Ryan Hickox of Dartmouth College discussed several proposed mechanisms for their formation, including a massive, galaxy-wide collapse of gas reservoirs termed “direct collapse”. Since it’s difficult to probe galaxies in the early universe, astronomers take an alternative approach to testing these theories: looking at nearby dwarf galaxies, whose SMBHs would likely not have changed much over billions of years – making them time capsules. The study successfully found evidence for a SMBH in one galaxy, Markarian 462. X-ray observations showed few low-energy x-rays, indicating that the source was being obscured. This suggests that existing methods of finding SMBHs in dwarf galaxies may be missing most of the population.

Mallory Molina of Montana State University explored the problem from a different angle. They used a novel method of distinguishing SMBH emission from surrounding stellar emission: a spectral line known as the coronal [Fe X] line from outflows surrounding the black hole. As discussed in an Astrobite from last fall, they searched through 40,000 candidates to find SMBHs in 81 of them – all in blue galaxies with young stars, unlike most of the known dwarf galaxies hosting SMBHs, which are largely without star formation. This means that the coronal line provides a way to search for a previously unknown population of SMBHs in star-forming dwarf galaxies.

Live-tweeting of the session by Graham Doskoch

Monday afternoon’s press conference focused on some of the highest-energy happenings of the universe: a new space telescope devoted to observing extreme phenomena in X-rays, stars getting ripped apart by black holes, and an extraordinarily bright supernova. Martin Weisskopf, from NASA’s Marshall Space Flight Center, kicked off the press conference by giving an overview of the recently launched Imaging X-Ray Polarimetry Explorer (IXPE) mission. This new space telescope is the first dedicated to X-ray polarimetry, meaning that it looks at high energy wavelengths of light and how those light waves are oriented. It launched last December on a Falcon 9 rocket, and the IXPE team just successfully completed deploying and commissioning the telescope. IXPE has plans to look at a whole range of astrophysical phenomena: AGN, microquasars, radio pulsars, pulsar wind nebulae, supernova remnants, magnetars, accreting x-ray pulsars, and more! The nominal mission is ~2 years, but the spacecraft has fuel to maintain its orbit for ~18 years—plenty of time for lots of fun science!

Vikram Ravi, a professor at Caltech, started off the next talk by telling us all about Tidal Disruption Events (or TDEs), where a star is spaghettified and ripped apart by a black hole, triggering huge outflow jets. These jets and the infalling matter produce radio emissions, which can hopefully be detected in the Very Large Array’s sky survey (VLASS). Jean Somalwar, a Caltech grad student in Ravi’s group, went on to describe multiple new detections of possible TDEs seen in VLASS data. One particularly exciting observation, known as VT J0243, is the brightest of these events discovered in VLASS data. This category of objects is still quite new, since the first radio TDE discovery was published in 2019. Since then, over 30 more have been discovered and Ravi and Somalwar expect even more with further investigation of the VLASS data. Their big takeaway from this talk? We need to study more radio flares at the centers of galaxies to understand the triggers and how to distinguish TDEs!

Finally, Caltech graduate student Yuhan Yao rounded out the press conference by telling us about yet another exciting new class of objects: Cow-like supernovae. These are named after AT2018cow (the “Cow supernova”), an exceptionally bright optical supernova discovered a few years ago, which was 10 times brighter than a typical supernova and seen across the entire electromagnetic spectrum. Only 4 similar objects, known as Cow-like supernovae, were previously known—but today, Yao announces a new one! AT2020mrf was recently discovered in the X-ray, using the Russian/German SRG telescope, and also observed in the optical by the Zwicky Transient Facility at Palomar and in the radio by the Very Large Array. A month after the supernova’s explosion, it was 10,000 times brighter than a typical supernova and 20 times brighter than the Cow supernova in the X-ray. A year after the star’s death, it was still observed to be quite bright in the X-ray by Chandra—200 times brighter than the Cow at the same point after its death! AT2020mrf also shows fast variability in its X-ray emission, indicating that these Cow-like supernovae produce an active central “engine” (e.g. an accreting black hole or rapidly spinning neutron star) to supply all these X-rays. AT2020mrf and these “cow-like events” are an exciting new class of transients and a window into the birth of compact objects!

Live-tweeting of the session by Briley Lewis

UR: Using Machine Learning to Identify Transients in the DESI Survey