Tertiary Troublemakers: How K2-290’s Planetary Orbits May Have Gotten So Weird

Title: The chaotic history of the retrograde multi-planet system in K2-290A driven by distant stars

Status: Accepted for publication in ApJL

Most planets orbit their stars in the same direction the stars spin. Why are some rare systems misaligned?

Recently, the K2-290 planet pair (b and c) were found to have strongly misaligned orbits, with a stellar obliquity (relative tilt) of 124+-6 degrees from their host star’s spin axis. An obliquity of greater than 90 degrees is considered retrograde, as the planets move in the opposite direction that the star spins. The system’s central star A is a member of a triple star system, as shown in Figure 1 below. Previous work concluded that this tilt was caused by interactions between star A and its stellar companion B while A’s system was still in the protoplanetary disk phase of development. The disk is knocked out of alignment when the planets are in secular resonance with star B, when the closest or furthest orbital points align. However, as these authors stated, “there may be more than one way to misalign a disk.” Today’s paper explores another possible cause of this misalignment, involving the system’s third stellar member, K2-290C.

Figure 1: Diagram of the K2-290 system (distances not to scale). The two planets share an orbital plane, with stellar obliquity of ~124 degrees. The distant stellar companions have some unknown mutual inclination, relative to one another. Stellar distances are projected onto the observable plane of the system from Earth, at some unknown inclination, meaning that the orbital separations may be larger by some unknown factor. [Figure 1 from the paper]

How to Misalign Your Planet

The authors simulated interactions between the 5 bodies to see what sort of initial conditions would result in this strange alignment. With more than 2 bodies gravitationally interacting, dynamical systems can be quite chaotic. When a distant third star (C, in our case) orbits a closer binary pair (A and B) at some inclination, it can cause the inner binary’s orbital eccentricity and inclination to oscillate, through a 3-body interaction called the Zeipel-Kozai-Lidov (ZKL) mechanism. These oscillations provide a possible mechanism for planetary orbit misalignment.

With star B on a highly eccentric orbit, it causes the inner planets’ orbital precession (slow tilting of spin axis) to change in frequency, knocking them out of star A’s equatorial plane. With star C in the picture to mess with star B’s orbit, a wide array of initial conditions can allow this strongly misaligned end result. 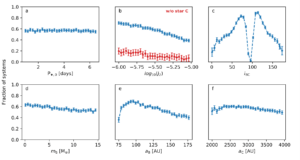 Figure 2: The fractions of systems with certain initial conditions which end up with the planets in an obliquity of ~124 degrees. These panels examine star A’s initial spin period, star A’s quadrupole moment (deviation from spherical shape), the mutual inclination of stars B and C, planet b’s mass, star B’s semi-major axis, and star C’s semi-major axis. The red points illustrate how simulations without star C don’t create the observed misalignment for reasonable estimations of star A’s internal structure. [Figure 5 from the paper]

The authors ran a ~50,000 trial population synthesis study of possible initial conditions for the system after its formation. They found that 56% of their scenarios reached the 124 degree obliquity observed within the star’s estimated age range of 3.2-5.6 billion years. In 17% of the trials, the planetary system was destroyed, and in 27% it remained intact but without high obliquity. When star C’s effect on the system is neglected, only 12% of their simulations end up reaching the observed obliquity.

So, what really happened to K2-290? Ultimately, the authors show that star C’s ZKL effect and resulting secular resonances could cause the observed retrograde planetary system seen in K2-290. Does this mean the previous paper about primordial misalignment in K2-290A’s protoplanetary disk is wrong? No, but it shows that it isn’t a requirement to get this result when tertiary-driven secular chaos mechanism is in play.

Some unanswered questions about this system remain. So far, it is only known to host these two planets, but its radial velocity measurements show that another planet with a longer orbital period is possible and could increase the level of interaction between the planets and star B. Putting better constraints on the orbits of stars B and C could further test this dynamical theory.

What does this mean for other planetary systems?

K2-290 was the first system found to present strong evidence of primordial disk misalignment, with star B at the right distance to cause the theorized effect. But, considering star C, these large obliquities can form after the protoplanetary disk phase from a wide array of different initial conditions. The primordial misalignment theory depends on some highly uncertain gas dynamics and evaporation, while the components of the tertiary-driven secular chaos scenario are physically pretty well understood. The two mechanisms could work together in some systems- the mechanism presented in this paper is not highly dependent on the initial system obliquity.

This 124 degree obliquity is not particularly special; this mechanism could drive systems all the way to 180 degrees, to a perfectly retrograde orbit. Additionally, in other systems, a Jupiter-sized planet at a tenth of the distance of star B could mimic star B’s effect, helping to drive the misalignment of inner planets. It’ll be fascinating to see what sorts of weird misaligned systems exoplanet hunters find next!