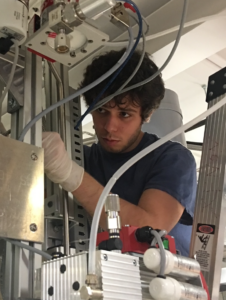 This guest post was written by Joseph Howlett, a PhD candidate at Columbia University. Joseph looks for dark matter and solar neutrinos in data from the XENON experiments and tries to make liquid xenon really clean. He enjoys looking at birds in Central Park and making weird stuff with friends.

The Milky Way is brimming with planets, and in the coming years scientists anticipate the discovery of tens of thousands more. As a new generation of instruments, such as the recently-launched JWST, plan to seek out inhabitable worlds and search for signs of extraterrestrial life, scientists are beginning to ask what else we can learn from this new class of planetary bodies. In today’s paper, the authors show that we can use exoplanets—planets beyond the solar system—to study the mysterious “halo” that holds our galaxy together, made of invisible particles called dark matter.

Gobbling up dark matter for warmth

As a planet moves through the cosmos, it sweeps through a swath of the galactic dark matter cloud. Most of the weakly-interacting dark matter particles pass right through the planet, but some may collide with one of its atoms, losing just enough energy to become trapped in its orbit, as shown in Figure 1. If enough of these orbiting dark matter particles accumulate, they will start to smash into one another, transferring their energy to the planet and making it warmer. By measuring the temperatures of exoplanets, infrared telescopes like JWST can look for dark matter through this heating effect.

Figure 1: (Left) As a planet moves through the Milky Way, a dark matter particle occasionally collides with one of its atoms and is trapped in its orbit. (Right) Once enough dark matter particles are in orbit, they hit one another, annihilating and transferring their energy to the planet, raising its temperature.

Dark matter’s “global warming” power has been studied before, using both nearby objects, like the planets in our solar system, and faraway objects, like neutron stars. But our planetary neighbors are few in number, and dead stars are already very hot, making the warming effect difficult to discern. Exoplanets are colder than dead stars and should soon be discovered in much greater numbers by infrared telescopes, since their size makes them visible from far away. This makes them a promising new window into the galactic dark matter furnace.

In asking what type of planets are best for this search, the researchers found that the closer exoplanets are to the center of the galaxy, the hotter they should be. Since the dark matter there is denser and slower-moving, it is easier for a moving planet to trap particles in its gravitational field and absorb their heat. If JWST sees that planets’ temperature go up close to the galactic center, it could mean that they are feeling the heat of the dark matter halo. Our best chance is to look for brown dwarfs, objects 14-75 times the size of Jupiter, which do not orbit a star but are too small to ignite themselves. These are large enough to pull in lots of dark matter and to be seen from far away, especially because they won’t be outshined by a solar host. JWST might observe brown dwarfs near the galactic center warmed to more than double their baseline temperature, depending on how the dark matter is distributed throughout the galaxy.

Jupiter-sized planets are too small to see except in nearby solar systems, but they are cold enough to discern even a tiny heating effect. The researchers therefore suggest a two-pronged approach: study whether brown dwarfs near the center of the Milky Way are much hotter than those at its periphery, and look for subtler signs of warming in the colder Jupiter-sized planets near Earth.

The authors also studied which types of dark matter can produce enough heating for JWST to detect. This method seems particularly advantageous for probing very light dark matter, since this is a blind spot for the most sensitive detectors on Earth due to its barely perceptible collisions with atoms. If dark matter happens to have a mass in the 0.1 – 1 GeV range, exoplanets and brown dwarfs might be our best shot at finding it. This is shown in Figure 2, where a significant unexplored region (the white area) falls above the solid lines, and thus can be explored for the first time by JWST. 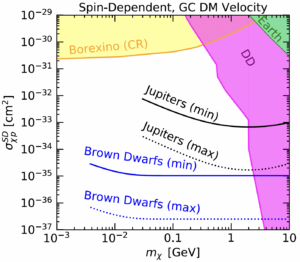 Figure 2: Lines showing the minimum dark matter interaction strength visible to JWST as a function of the dark matter particle’s mass, for a particular dark matter interaction. If dark matter lies in the region above the black or blue lines, the heating effect should be visible in Jupiter-sized exoplanets near Earth or in brown dwarfs near the galactic center, respectively. While the dotted lines represent JWST’s expected performance, the solid lines are a more conservative estimate. Dark matter in the colored regions has been ruled out by various existing experiments. Image credit: Figure 3, Leane and Smirnov (2021).

This paper provides a new way to take advantage of an exciting field that is just moving beyond its infancy. The rapidly growing inventory of exoplanets may reveal not only our galaxy’s living inhabitants, but also some of its oldest non-living ones—the particles that make up the dark matter halo.

Don’t change the station! Substellar objects are up next!