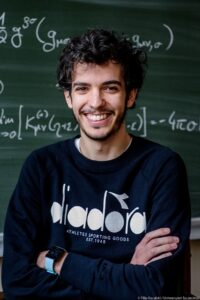 This guest post was written by Paolo Cremonese, a PhD student at Szczecin University, in Poland. He studies the wave effect of lensing of gravitational waves in order to constrain the astrophysical and cosmological parameters connected with these events. Outside university, he loves doing and watching sports, and travels as much as he can.

The detection and study of gravitational waves is an exciting and expanding field of astrophysics. Deep learning is an established and powerful tool that can be used for data classification in many fields. Can we apply deep learning to the study of GWs? Today’s paper says yes!

Putting An Ear to the Universe

The first detection of a gravitational wave signal, by the Laser Interferometer Gravitational Wave Observatory (LIGO) in 2015, opened a new eye to the universe. Actually, it opened, for the first time, an ear to the universe. In fact, gravitational waves are much more similar to sound than light. They do not produce photons, so we cannot get a proper image of the sources, and, just like sound waves, they emit in all directions. Instead of propagating through the air, though, they propagate through spacetime itself and can be produced by some of the most powerful events in the universe: merging black holes and/or neutron stars.

The main problem with detecting gravitational waves is that the signals are extremely faint and, even though the detectors are among the most sensitive tools ever built, the signal can get buried in noise. This noise can be caused by seismic activity, the fluctuation of the atoms that compose the detector, electronics used in the machine and many other small perturbations. Therefore, the best way to recognize the signal immersed in this noise is to know in advance what we are looking for. The standard, computationally expensive, way to do this is to use matched filtering, which compares the signal that we measure to a catalog of known signals to find the best match.

So how can we identify these signals more efficiently? Today’s paper says deep learning. After all, the purpose of deep learning is to classify and recognize patterns. Deep learning relies on the fact that we already know what we are looking for, and we use this knowledge to quickly decide if our data contains known features. For example, if we train the algorithm to recognize the features of a cat, given a set of pet pictures, it can sort out which ones contain cats, as shown in Figure 1. That is exactly what the authors of the paper did, except that they searched for gravitational wave signals from LIGO instead of cats. 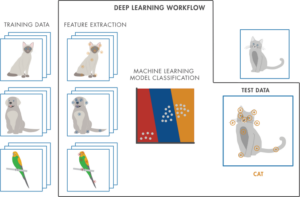 Deep learning works very well as an image processing algorithm, but the raw data produced by GW detectors are not really suited for this kind of study. Gravitational wave signals are detected in terms of strain, or how much spacetime is stretched and compressed by a gravitational wave. To turn this into an image, the authors created spectrograms, which plot the signal strength as a function of frequency over time, from the strain data. As shown in Figure 2, the authors used data from the three GW detectors currently in use: LIGO Hanford, LIGO Livingston and VIRGO. They assigned each detector to colors (red, green and blue, respectively), and then merged the images together, creating a colored image, which describes the event. This image, finally, is well suited for a deep learning study.

The next step is to train the algorithm to recognize gravitational wave events. The more numerous the data in the training set, the better the recognition will work. For a typical gravitational wave event, a compact binary coalescence (e.g. two merging black holes), the expected spectrogram is well understood and can be simulated for many different cases. Therefore, the authors simulated a huge number of events: in total, more than 80,000 images were created to train the algorithm and 25,000 to test it. 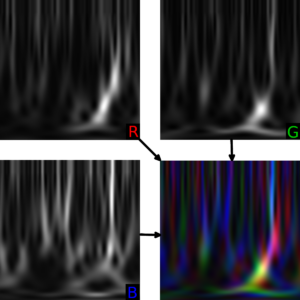 Figure 2: Spectrograms of the signal in the different detectors. The x-axis describes the time and the y-axis the frequency of the GW event. The detectors are assigned colors, red for Hanford, green for Livingstone and blue for Virgo, and then merged to form a colored picture of the event. (Figure 1a in the paper)

The authors found that the deep learning algorithm is very well suited to identify gravitational wave signals. They were able to recognize all the 10 signals from the first observing run, O1, and 34 out of 37 events (excluding neutron star merger events) of the second observing run, O2. The 3 unrecognized events might have been left out because, as the authors emphasized, the algorithms were optimized for the sensitivity of O1. They were also able to infer parameters of the events, such as chirp mass and distance, as shown in Figure 3.

Figure 3: GW event parameters. LIGO results are shown in green, while the predicted parameters from the paper are shown in blue and red. On the x-axis we find the 3 different parameters described in the figure: chirp mass, luminosity distance and effective spin; on the y-axis are the O1 events. The two results agree for all of these events. (Figure 11b from the article)

These results show that deep learning is effective at finding gravitational wave signals buried in noise. Instead of going through a long and computationally demanding process to search for the signals, as matched filtering can be, deep learning can quickly find them in a fraction of the time. This could be incredibly useful in the future as detectors like LIGO are upgraded to greater sensitivities and will observe an ever growing number of events.