Modern cosmology, at its most basic level, can be summed up by the Friedmann Equations.  These equations, derived from Einstein’s general relativity by Alexander Friedmann in 1922, describe how an isotropic, homogeneous Universe expands from an initial singularity, depending on the relative abundances of the Universe’s constituents (e.g. baryonic matter, radiation, etc.).  For example, if the Universe was made only of photons, the Friedmann Equations predict that the Universe would expand at a rate of

is the age of the Universe. 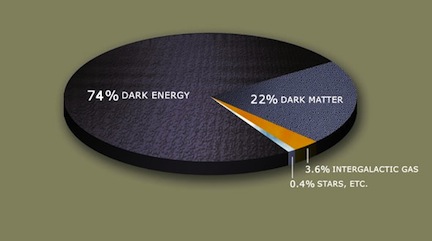 The Cosmic Pie: This figure shows modern estimates of the mass-energy ingredients in our Universe. Copied from Wikipedia.

The fact–determined relatively recently–that our Universe is not only expanding, but that its expansion is accelerating, has led most cosmologists to accept the existence of an additional cosmological ingredient: dark energy.  According to mainstream cosmology, this seems to be a strange form of energy which does not dilute (If you take a box containing some dark energy, then double the size of the box, you now have double the amount of dark energy you did before).  Furthermore, it takes up a significant fraction of the total mass-energy of the Universe– roughly 74%  (see pie chart).  Dark energy can be parametrized in the Friedmann equation through a term called the “cosmological constant”

.  Similar to the radiation case considered above, in a Universe dominated by dark energy, the size of the Universe grows exponentially as

turns out to be a hugely important parameter.It would be nice if we could directly predict the value of

from first principles.  And physicists have certainly tried, by deriving from quantum field theory the prediction of what the energy of the vacuum should be.  The problem is that the number they get is about

times larger than the value of

that is observed.  This incredible disparity (sometimes jokingly referred to as the greatest scientific miscalculation ever made) is discouraging since it seems a bit arbitrary.  Why should its numerical value be so vastly different from the one predicted by quantum considerations?

The anthropic principle is one way of answering the question posed above.  It essentially argues that we see such a strange value of

in our Universe because most other values of

are not conducive for life to exist at all.  For example, Steven Weinberg argued that if

was much higher than the value we observe, the Universe would expand too fast for large-scale structure (and hence, life!) to form.  Any sentient observer looking out and measuring the cosmological constant should only measure values that are consistent with the sentient observer existing in the first place!

If this approach seems a bit strange to you, you are in good company; the anthropic principle is one of the most hotly debated ideas in modern cosmology.  Ignoring the philosophy-of-science discussion that rages over calling such a principle “scientific”, the anthropic principle clearly depends on a multiverse hypothesis, or the idea that there must be infinitely many Universes, where different Universes can have different values of

(or the fine structure constant, etc.).

In order to mathematically formalize the anthropic principle, we need some way to determine the “probability” of an observer somewhere in the Multiverse looking out and observing a given value of

.  But when we consider the fact that there are infinitely many Universes, the idea of assigning probabilities becomes perilous.

A little more background: without getting into the technical details of string theory, we note that our current understanding of string theory implies that there are about

different Universes that have

.  On the other hand, it appears that the number of Universes with $Lambda ≤ 0$ is actually infinite.  Furthermore, there’s no obvious reasons why life can’t exist in Universes with small, negative values of

, and that both could support life, then, by the anthropic principle, we would have to conclude that we are much more likely to live in a Universe with

≤ 0.  In fact, due to the fact that there are only finitely many Universes with

, the probability that we live in such a Universe is exactly 0.  But we, as human beings, do live in a Universe where

.  This seems to show conclusively that the multiverse hypothesis is false.

The paper shows a way to recover the multiverse hypothesis and anthropic reasoning based on two distinct results, but we will focus on the first in this astrobite.  The authors argue that the fact that an event has zero probability does not mean that it is impossible.  To quote the paper:

In other words, we must be careful to distinguish between “explaining” and “predicting”, based on what information the observer has.  Different amounts of information lead to different probability estimates (this is a basic result of Bayesian probability theory).  After applying the prediction-based probabilites (as discussed above) and found the probability of

to be 0, when you measured

, you would not be able to conclude that the multiverse does not exist.  Rather you would need to use “explanation-based” probabilities, which are shifted from the old probabilities based on the fact that you now know the value of

!  The authors show, using this method, that once you know you exist in a Universe with

, then the probability of a multiverse existing is still nonzero.  Hence, the anthropic principle and the multiverse it depends on are not, in this case at least, at odds with the empirical fact that in our Universe