Hydrogen is the most abundant element in the universe. Therefore, astronomers are intimately familiar with the various forms in which hydrogen is found, as well as their associated radiative transitions. It turns out that there is a lot more to the universe than just stars, planets, and galaxies. Much of the “empty space” between these objects is actually host to interesting astrophysical processes, such as star-formation in molecular clouds. Hot, young stars can emit strong radiation that will ionize the surrounding hydrogen gas. Astronomers call these dense regions of ionized hydrogen (ie, just protons and electrons dissociated from each other) HII regions (neutral, atomic hydrogen is called HI, and diatomic molecular hydrogen is called

). In their paper, the authors investigate HII regions near the center of our galaxy via observations in two different frequency regimes, the near-infrared and the radio. 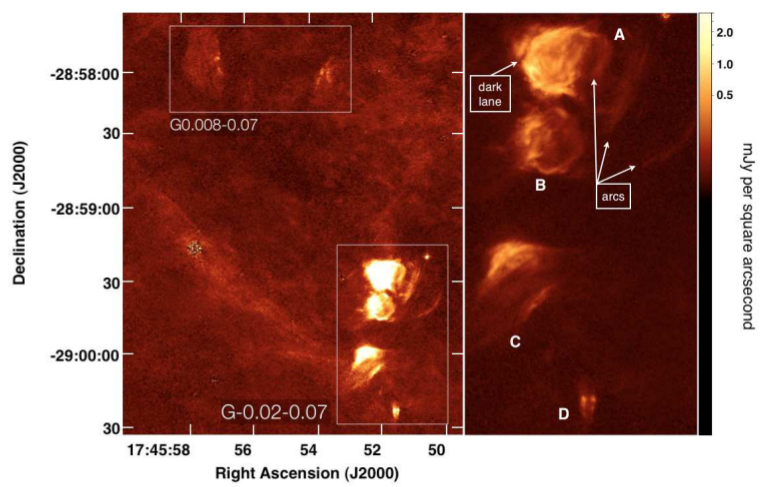 Figure 1: The four HII regions, A through D, that the authors studied near the galactic center. Region D is believed to be an ultra-compact HII region. Figure from Mills et al. 2011

In this paper, Mills et al. study a group of four HII regions (G-0.02-0.07) that is 6 parsecs in projection from the supermassive black hole at the center of our galaxy, Sag A*. These regions are adjacent to the giant molecular cloud M-0.02-0.07.

The authors present high-resolution images of these regions obtained by the NICMOS instrument on the Hubble-Space-Telescope (HST) using the 1.87 micron Paschen alpha emission line. You may recall my discussion on the naming of spectral lines in a previous post. Like the Lyman and Balmer series of transitions, the Paschen series of transitions represents transitions of atomic hydrogen. For example the n=4 to n=3 transition is called Paschen alpha, the n=5 to n=3 transition is called Paschen beta, and so on. The Lyman series falls in the ultraviolet range of wavelengths, the Balmer series falls in the optical (which is why it is one of the best-studied in astronomy) and the Paschen series falls in the infrared. From their observations, the authors determine important spatial information about the relative positions of the HII regions in relation to the molecular cloud.

In addition to this Paschen alpha map, the authors obtained 8.4 GHz archival data from the Very Large Array (VLA). Many astronomical observatories (including space-based observatories like HST) have a policy that a year after you have taken your data it becomes public and is placed on an archive, which is freely available to the community. This practice has enabled many astronomers to quickly compile cross-wavelength data for study.

Radiation at radio frequencies is not as strongly affected by extinction as near-infrared radiation is, since the wavelength of radio waves is much larger than the interstellar dust grains, molecules, and atoms that can cause extinction when light scatters off of them and out of the line of sight of the observer. The authors compare the observed intensities of each type of radiation in order to determine the amount of Paschen alpha radiation that has been lost, and by using a model for the amount of radiation that they should have seen, they can then determine the amount of extinction.

Region D, an ultra-compact HII region, suffers significantly more extinction than the other regions. This higher extinction, as well as the asymmetry of emission from region D, suggests that it is embedded in a dense region of the G0.02-0.07 cloud where there is a significant density gradient. Based upon the extinction measurements for the other regions, the authors conclude that regions A-C are located in front of the M0.02-0.07 molecular cloud, but that D is embedded within a dense ridge of the cloud.