What is a white paper?

An astrophysicist’s dream of exploring the mysteries of the Universe often clashes with the reality of needing funding to do so. Back in the good old days (think Tycho Brahe, as an example), obtaining funding was all about convincing someone wealthy/important/royal that your ideas had merit: if you could make a convincing argument, you could get a patron (and possibly your own island). In today’s world, you still need to sell your ideas. Now, however, the people you need to convince are the members of the scientific community.

Enter the white paper: a means of presenting your ideas to the community of your peers. In astrophysics, white papers come up most commonly in the context of decadal surveys, such as the Astronomy and Astrophysics Decadal Survey, the Planetary Science Decadal Survey, and the Solar and Space Physics Decadal Survey. In these surveys, a panel of scientists chosen from the larger scientific community convenes to review the current state of the field and identify research priorities. This panel then makes recommendations as to which of those priorities should be pursued in the coming decade. As an astrophysicist, white papers are the means by which you can present your ideas for missions or research to the panel for consideration.

With that background, we can now look at an example of a white paper, recently posted on astroph: 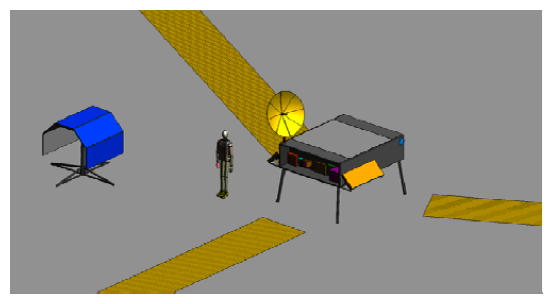 Introduction
Ground-based radio imaging is limited by something known as the terrestrial ionospheric cutoff, a frequency of about 25 MHz below which the ionosphere is opaque to radio waves. Radio imaging for solar studies, which often fall below this frequency, must therefore be conducted by arrays located outside the ionosphere. The authors propose that this could be accomplished by a radio array located on the lunar surface (see Figure 1) — a mission they dub Radio Observatory on the Lunar Surface for Solar studies (ROLSS).

Science Goals
The authors argue that ROLSS would give insight into several key areas of solar physics. In particular, ROLSS would allow higher-resolution imaging of solar flares and the shock fronts of coronal mass ejections. When electrons are accelerated in these regions, they can produce intense radio bursts which would be detectable by ROLSS, potentially offering insight on poorly-understood particle acceleration processes and locations.
A secondary goal is for ROLSS to search for a lunar ionosphere. The ionosphere is a dynamic component of the tenuous lunar atmosphere which would have significant impact on our ability to use low-frequency imaging arrays on the Moon — but, according to conflicting studies, it may or may not exist. ROLSS has the potential to settle this debate, if it were to observe a low-frequency cutoff in radio burst data.

Figure 2: Left: the nominal distribution of antennas along the array arms. Right: the associated point-spread function ("beam") for a snapshot image, given this antenna configuration. Figure 4 in the paper.

Implementation
The ROLSS array concept consists of three 500-meter arms arranged in a Y configuration (see Figure 2). The array would operate over the wavelength range of 1-10 MHz, providing ~2° angular resolution at 10 MHz — an order of magnitude improvement over current technology.
The arms consist of a polymide film on which dipole antennas are deposited, allowing for each arm to be stored as a roll during transit. These could then be easily deployed on the lunar surface, either robotically, by astronauts on a crewed rover, or a combination of both.
ROLSS would be best located at a site near the lunar equator, since the primary science goal is solar observations. Because this also ensures it wouldn’t need to operate during the lunar night, it could be sufficiently powered by solar panels.

Cost Estimate
The authors give a breakdown of the budget for ROLSS. Their estimated grand total for the project — which covers hardware, development, labor, facilities, and project management — comes out to ~$89 million. This includes the deployment rover system (~$20 million), but does not include the cost of a launch vehicle and lander to transport the array to the lunar surface.

Conclusion
The use of radio bursts as a tool for investigating particle acceleration and propagation has thus far been performed without imaging capability below ~20MHz. The authors argue that a radio observatory such as ROLSS would fill this gap and yield the first images of radio bursts in the outer solar corona and interplanetary space, providing new information on particle acceleration and solar flares.