It is well known that various properties of galaxies, such as luminosity, evolve as a function of their distance from us. Figuring out exactly how galaxy luminosity evolves can be very difficult, however. This is partly because so many factors can influence a galaxy’s luminosity, from color to galaxy type to star formation rate. But a more fundamental difficulty is figuring out how far away a galaxy is! In previous astrobites you may have seen references to astronomy’s “cosmic distance ladder” – a clever method of using steps from close objects to far ones to determine cosmological distances. A more direct approach can be used if you are willing to investigate objects just as a function of their redshift, z. Generally, a galaxy’s redshift can be determined from its spectrum using features like emission or absorption lines. Taking spectra can be an expensive and time-consuming process, however, so with giant photometric surveys like the Large Synoptic Survey Telescope (LSST) being planned, the ability to determine redshifts without spectra is becoming a hugely important tool for astronomers. In this paper, the authors investigate the possibility of using photometric redshifts to determine the galaxy luminosity function.

Photometric Redshifts
So how does one determine the redshift of a spectrum, without a spectrum to see how far it has shifted?  One technique is the use of template fitting to determine a photometric redshift (colloquially known as a “photo-z”). The figure below shows how this technique can be implemented. In a photometric survey, the light from a galaxy is measured in a number of spectral “bands”, labeled u, g, r, i, and z from blue to red in this figure.  Also shown in this figure is the template spectrum of an elliptical galaxy. As the galaxy gets closer to us (decreasing in redshift), the spectrum we observe shifts through the various bands, and different amounts of light will be measured in each. Using a template library of various galaxy types, one can then compare the observed colors in each band to the colors that would be produced by each type of galaxy at various redshifts. When the method works, the closest match will correspond to the template that is the correct galaxy type at the correct distance. 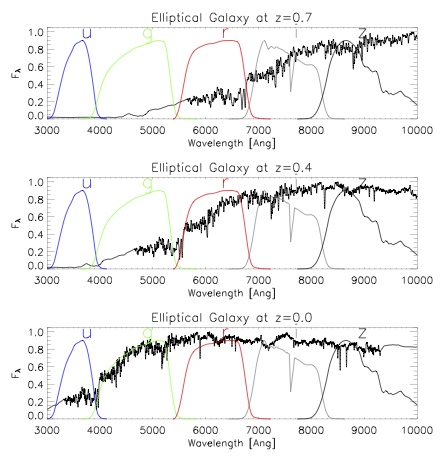 From Padmanabhan (2007), this figure shows the way the spectrum of an elliptical galaxy moves through various photometric bands as it increases in redshift.

Data
The goal of this paper was not just to measure the luminosity function using photo-z’s, but also to compare it to the same function determined using spectroscopic redshifts, in order to see how well the photo-z technique is working. To do this, the authors used a data set covering the four deep fields of the Canada-France-Hawaii Telescope Legacy Survey (CFHTLS), from which they determined photo-z’s for 385910 galaxies. One of the fields had overlapping data from a spectroscopic survey, giving them 4813 galaxies with both a photometric redshift measurement AND a spectroscopic redshift measurement. For analysis, the galaxies were then binned by redshift, so that there would be enough objects at each distance to be statistically significant.

The result of the spectroscopic vs. photometric comparison is shown in the figure to the right. In each redshift bin, the galaxies’ magnitude, M, is plotted against the number density of galaxies at that magnitude,

(this is known as the luminosity function). As the fits show, the luminosity function is nearly identical in every redshift bin except the first one, and the authors conclude that the discrepancy in the first bin is probably a result of having too few galaxies in that bin, which is not a problem at higher redshift where photo-z’s become most important. The authors also note the overdensity of galaxies that emerges at the bright end of the magnitude range with increasing redshift. This excess is thought to be the result of active galactic nucleus (AGN) activity in the brightest galaxies. Overall, the agreement between the spectroscopic functions and the photometric functions is excellent, which bodes well for the accuracy of the photo-z’s. 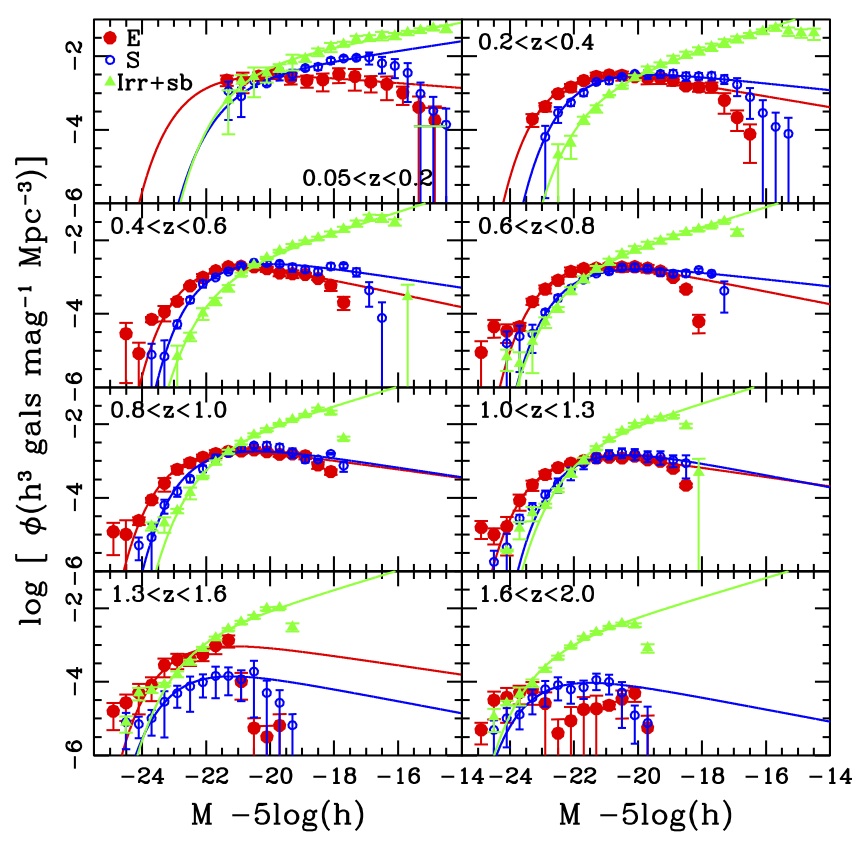 Plotted is a comparison of the luminosity functions of different galaxy types, in 8 redshift bins. Fig. 7 from the paper.

With LSST and other large photometric surveys coming online in the near future, huge photometric data sets will soon be available, for which spectroscopic followup will be impossible. Therefore, using techniques such as determining photometric redshifts will allow astronomers to probe relationships like the luminosity function with unprecedented statistical accuracy, and improving on such methods will likely be a hot topic for the next several years.