Stars are essentially element factories: most of the elements which we know (and dearly love, for life’s sake) were produced by some aspect of stellar evolution, either during their long, uneventful tenancy on the main sequence, shorter and swifter time as a red giant branch star, or their catastrophic death as supernovae (in a bit of timely astro-news, one of the closest supernova in recent times was discovered in the past few days, in the galaxy M51).

In this astrobite, we’ll first talk about stellar evolution and then present the paper after the second figure.

After spending most of their lives on the main sequence (where hydrogen burning occurs during the proton-proton chain or CNO cycle) of the Hertzsprung-Russell (HR) diagram (Figure 1), stars will move off the main sequence once a substantial fraction of hydrogen has been used up in the core of the star. Nucleosynthesis (and its accompanying heat-generation) ceases, causing the star to contract. As the star contracts, it heats up (due to the Virial theorem and hydrostatic equilibrium). With higher temperatures, hydrogen burning then resumes in a shell on the outside of the helium core, and the star moves quickly to the base of the red-giant branch of the HR diagram. Depending on the initial mass of the star, different processes could now take place (see Figure 2). If initial mass of the star is greater than 2.25 solar masses, the interior of the star will be hot enough for a smooth transition to helium burning via the triple-alpha process. This process and subsequent alpha particle captures will deposit carbon and oxygen in the core of the star. If the star is less than 8 solar masses, this core will cool, contract, heat up, and become increasingly electron degenerate. For the more massive stars in this range (6 to 8 solar masses), carbon burning can set in to produce magnesium (Mg), sodium (Na), and neon (Ne), resulting in an oxygen-neon-magnesium (ONeMg) white dwarf. Depending on the temperatures, this core can become degenerate. 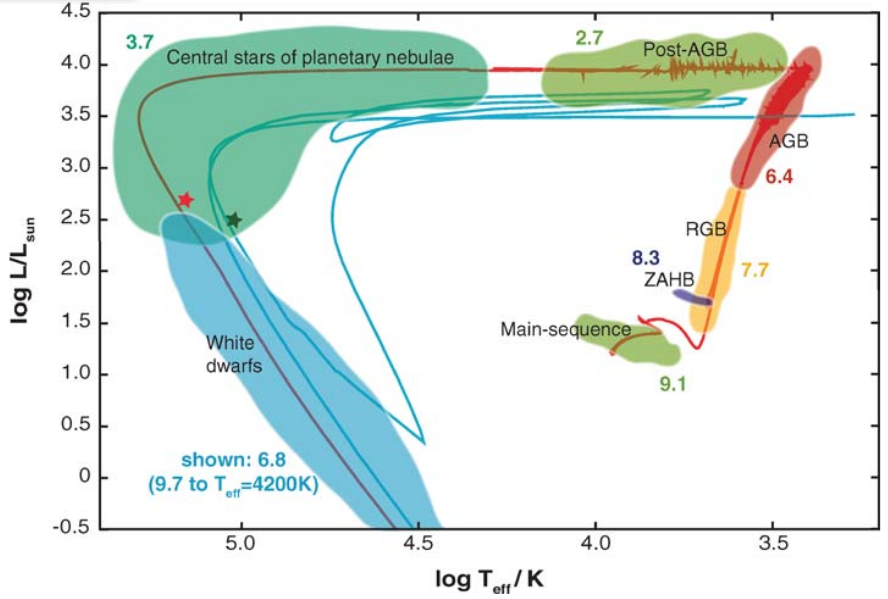 This proto-white dwarf resides at the center of the star as shells of helium and hydrogen burn on top in an onion-shell structure. Thermal instabilities also occur and result in “thermal pulses” where runaway nucleosynthesis occurs on the surface of the degenerate cores. The ashes of these burning processes (He, C, N, O in the CNO equilibrium ratios) are left behind. If the initial stellar mass is less than 2.25 solar masses, the helium core will become degenerate before commencing triple-alpha burning. Once this degenerate core reaches 10^8 K, however, the triple-alpha process will start abruptly in a runaway reaction, because the degenerate material does not expand when heated like a normal layer of hydrogen. This is called the “helium flash,” where an intense amount of energy is deposited in a short amount of time. Incidentally, this same runaway thermonuclear burning but in a degenerate layer of hydrogen on the surface of a white dwarf is believed to be what powers novae. However, in this astrobite, we are concerned with stellar masses between 6 and 8 solar masses. For great introductory material on the physics of stellar evolution, check out the references at the bottom of this post. 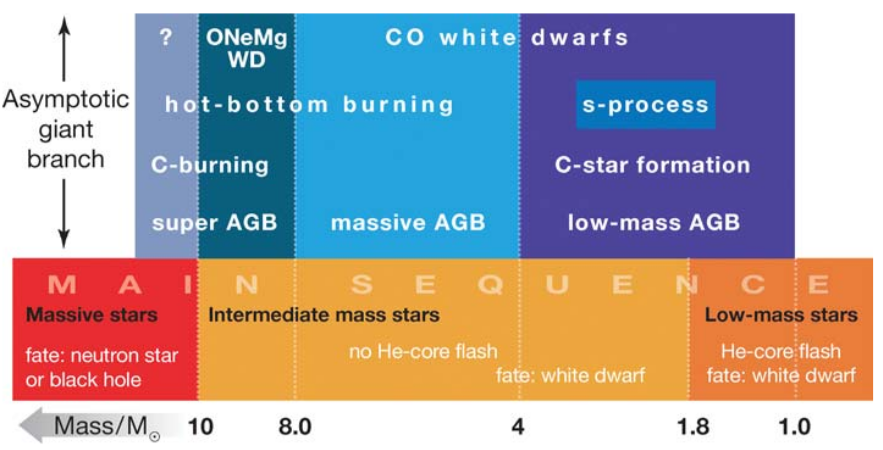 Figure 2: Evolutionary chart showing what the end state of a star is based upon its inital mass.(Figue from Herwig, 2005).

“Dredge up” occurs during the transition between burning stages, when the core contracts (due to diminishing thermal support from the exhaustion of hydrogen, or later, helium) and the outer envelope of remaining material (such as hydrogen, or later, helium) expands (due to the hotter temperatures at its base). During this switch over, the convective outer envelope deepens its convection zone, and “dredges up” material from the inner core. This enrichment can be observed through spectroscopy of the surface layers of the star.

And so we reach the focus of today’s paper, hot bottom burning, which only occurs in massive (6-8 solar mass) asymptotic giant branch stars. When the convection zone in the outer layer of a massive star extends too deeply, it will pick up more material from the burning zone. Thus, the lower part of the convective zone is actually undergoing nuclear burning. The burning zone then has better access to fuel as it is imported via convection. A larger core mass means that hot bottom burning will be more efficient.

After reading this relatively brief description of stellar evolution, one may wonder, “how do we know this?” The answer is through many decades of observations and theoretical development including spectroscopy, astroseismology, solar flares, x-ray and radio observations, and detections of solar neutrinos. In their paper published on the archive, Ventura et al. examine the abundances of and correlations between magnesium, aluminum, and silicon in AGB and the more massive Super AGB (SAGB) stars. These elemental abundances are determined through spectroscopic observations of the visible surface of the star.

There are well-established anti-correlations between oxygen (O) and sodium (Na), and between magnesium (Mg) and aluminum (Al), meaning that more sodium is seen at the expense of oxygen. Mg to Al nucleosynthesis takes place in the helium shell, which burns via the triple alpha process. The synthesis of Al in SAGB stars is associated with the proton capture of Mg-24 in the deepest regions of the convective zone. This process is highly dependent on temperature, and in a narrow range of temperatures can switch from being the dominant process to the limiting reaction. SAGB stars can achieve these high temperatures necessary at the base of their convective zones, and thus convert much of the Mg into Al, driving the anti-correlation as Mg is depleted and Al is enriched.

Because the authors predict that the most extreme chemical compositions will derive from the AGB stars which are at the border of the AGB/SAGB limit (roughly 6 solar masses) they choose to exclusively model only these stars in their paper. The authors compare four different models with varying elemental compositions, and track their evolution over time. In addition to reproducing the magnesium-aluminum anticorrelation, the authors show that there is a positive aluminum-silicon correlation. Aluminum and silicon are believed to be positively correlated because a small part of the aluminum that is produced is converted into silicon (presumably the initial composition of silicon is small enough that the depletion of aluminum is not significant in exchange for a significant increase in silicon production).