Title: 55 Cancri: Stellar Astrophysical Parameters, A Planet in the Habitable Zone, and Implications for the Radius of a Transiting Super-Earth

Why Exoplanet Scientists Should Care About Stellar Astrophysics

As we begin trying to characterize exoplanets, this large uncertainty on the radius and, in turn, density of the planet, makes it challenging to determine the planet’s bulk composition. Exoplanet scientists therefore would benefit from a direct technique to precisely and accurately determine the size of the host stars.

Optical interferometry measures stellar radii by utilizing two telescopes with a long (and very precisely measured) baseline between them. By combining the light from two telescopes with a known distance between them and using both phase and amplitude information, the angular resolution of the image can be greatly improved. Interferometrically combining data from the two telescopes gives observers the effective angular resolution of a telescope with a diameter the size of the baseline (hundreds of meters across!).

As we learned last month from Elisabeth’s astrobite, 55 Cancri is an interesting exoplantary system with  5 planets, one of which is a newly-discovered transiting super-Earth. The system is particularly interesting for follow-up observations because 55 Cancri is such a bright star — visible with the naked-eye if you’re somewhere with very dark skies!

Previous measurements of the radius were interferometric, but had fairly large error bars. In 2008, Baines et al. published a radius of 1.15 ± 0.035 solar radii, and in 2009, van Belle and von Braun published a radius of 1.1 ±0.096 solar radii. In this paper, the authors used a longer baseline interferometer to observe 55 Cancri and better constrain its size, age, and temperature. 55 Cancri is an excellent system for making these types of stellar astrophysics measurements because the star is so bright and close to Earth.

The instrument used to make these measurements was the Center for High Angular Resolution Astronomy (CHARA) Array at Mount Wilson. Interferometry directly measures the angular diameter of the star on the plane of the sky. This angular diameter is combined with the published trigonometric parallax measurement which measures the distance to the star. The radius of 55 Cancri is measured to be 0.943±0.010 solar radii (only a ~1% uncertainty!)

The effective temperature is determined from spectroscopic observations to be 5196 ± 24K, and the stellar mass and age are determined from stellar models to be 0.905 ± 0.015 solar masses and 10.2 ± 2.6 billion years, respectively. 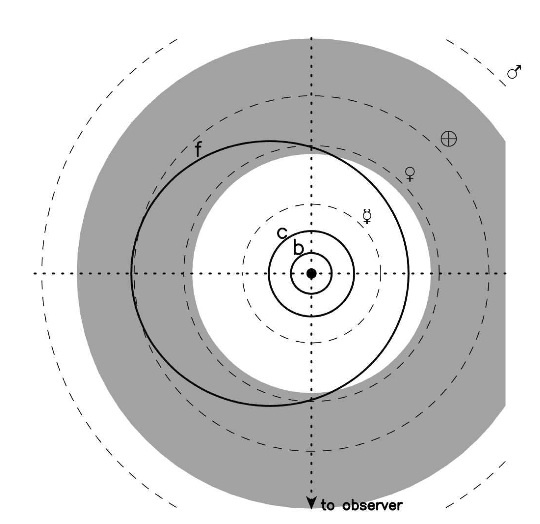 A zoomed-in, top-down view of the 55 Cancri system. The habitable zone is shown in grey, and each of the planet's orbits is shown (with the solar system planets shown as dotted lines). Note that 55 Cancri f spends most of its time in the habitable zone on its slightly elliptical orbit.

The authors then discuss the implications of their new observations for 55 Cancri’s habitable zone (see figure). They calculate that one of the planets, 55 Cancri f spends 74% of its time within the habitable zone, where liquid water could exist on the surface. They also recalculate the density of 55 Cancri e (the super-Earth) based on their new stellar radius measurement.

Improving stellar astrophysical measurements will help us to better characterize exoplanets. Interferometric observational techniques applied here are especially useful for nearby stars, so it seems likely that the planets that will be easiest for us to characterize effectively will lie around these nearby stars.