The largest survey to date is the NRAO VLA Sky Survey (NVSS) which surveyed the northern sky; the deepest radio survey, most sensitive to faint sources, is the Lockman Hole Observation.

The Square Kilometre Array (SKA) is a proposed radio telescope that will consist of thousands of 15-meter dishes which will work together as a giant telescope to look much deeper into the sky than is possible with current radio telescope technology. This international collaboration won’t be finished until at least 2022 and much of the technology still needs to be developed and tested. 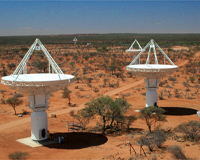 The first six antennas have already been built in Western Australia.

The Australian SKA Pathfinder (ASKAP) will be a scaled-down version of the future Square Kilometre Array, designed to develop and test the types of technologies needed to build huge arrays of radio telescopes and use them most effectively. It will consist of 36 12-meter antennas spread over a region 6 kilometers in diameter. The most novel part of the project is the “feed array” at the focus of each antenna. While most current telescopes have a single receiver at the center, this new technology would use a phased array feed, consisting of 96 pixels which work together to image the radio sky. This will give ASKAP a field of view of 30 square degrees and allow it to survey the sky thirty times faster than existing arrays. It is currently being built in Western Australia and large science surveys are expected to start in 2013.

Evolutionary Map of the Universe: EMU

EMU is one of the proposed surveys to use ASKAP and was ranked as one of the two highest priority projects for the first observations. Its major science goal is to make a deep radio continuum survey of the entire southern sky. It will cover 75% of the sky and will be 45 times more sensitive than the NVSS survey with 4.5 times better angular resolution. 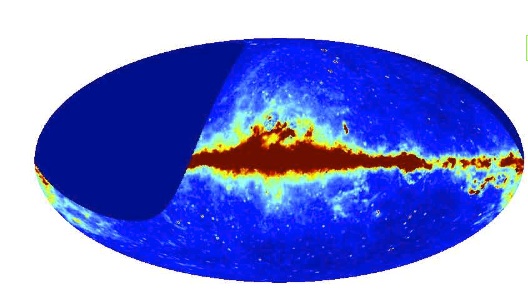 This shows the sky coverage of the EMU survey in galactic coordinates (overlaid on WMAP data). The dark area is the 25% of the sky NOT covered.

The other highest ranked survey, called WALLABY, will image the sky searching for neutral hydrogen. (One of the skills of being an astrophysicist that I didn’t appreciate until I came to graduate school is the creativity to make witty acronyms for your projects. Other proposed ASKAP projects include DINGO and POSSUM.)

Using this improved sensitivity in radio frequencies, EMU will be used to study a variety of astrophysical topics. It will sample a large population of star-forming galaxies and AGNs, explore the evolution of these systems, and greatly expand the number of known galaxy clusters at higher redshifts. EMU will provide independent tests of dark energy models and general relativity. Closer to home, it will allow us to measure aspects of star formation, supernova remnants, stellar radio emission, and pulsars. Lastly, as the widest and deepest survey of its kind, EMU could detect new classes of objects too faint for previous detectors!

EMU will contribute to many different areas of astrophysics from stars to galaxies to cosmology; it will find interesting objects that can be followed up with other observatories designed for deep observations such as ALMA. ASKAP will also provide an excellent testbed for the new phased array detector technology expected to be used in the Square Kilometre Array in the next decade.