Spectroscopy is a fantastic way to study the composition of astronomical sources, but many large surveys do not acquire spectra for all objects. One of the ways that astronomers can classify objects without spectra is to examine their colors (their difference in brightness between two filters), but sometimes different types of objects can have similar colors. For instance, quasars and stars might not seem like similar objects, but one of the challenges of identifying quasars at 2.2<z<3 is that the colors of moderate redshift quasars blend in with the colors of stars at optical wavelengths. However, moderate redshift quasars can be separated from stars due to their enhanced variability and their near-IR colors. In this paper, Wu et al. combine those two quasar identification methods to identify 14 new quasars at 2.36<z<2.88 in Stripe 82 of the Sloan Digital Sky Survey (SDSS) and to identify an additional 188 moderate redshift quasar candidates.

Previous researchers have successfully identified quasars by monitoring the variability of targets in long-term photometric measurements and fitting the variability with power laws that have amplitudes and indices consistent with identification as quasars rather than stars (e.g., Schmidt et al. 2010) or by using color cuts in optical/near-IR color-color diagrams (e.g., Wu & Jia 2010). The goal behind this paper was to test whether applying the two selection criteria simultaneously would increase the efficiency of quasar classification.

Wu et al. begin by selecting a sample of quasar candidates from Stripe 82 of the SDSS survey using an existing quasar selection algorithm (Schmidt et al. 20100). The candidates have variability levels that would be consistent with identification as quasars, but their UV and optical colors overlap with those of stars. Over half of the candidates (70 out of 118) also have known near-IR YJHK magnitudes from the UKIRT (United Kingdom Infrared Telescope) Infrared Deep Sky Survey Large Area Survey (UKIDSS LAS). Wu et al. use the additional color information to plot the 70 candidates with known near-IR colors on a Y-K/g-z color-color diagram. They then apply the quasar color cut identified by Wu & Jia 2010 (2010) to classify all candidates with Y-K colors above 0.46(g-z)+0.82 as probable z<4 quasars and all candidates with colors significantly below that line as stars. 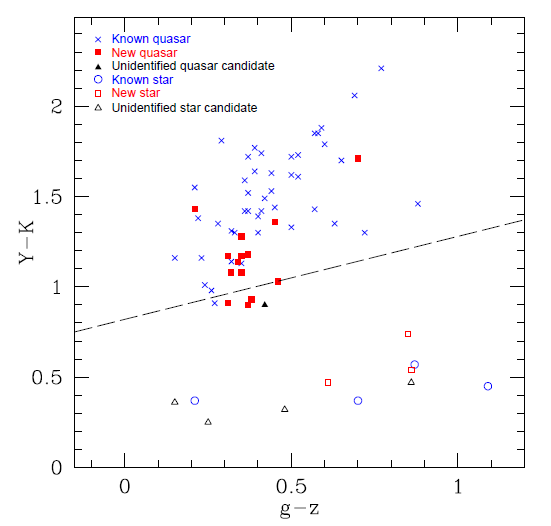 Color-color diagram of variable quasar candidates. The authors identify the objects marked by red squares as new quasars using the indicated color cut from Wu and Jia (2010) and subsequent spectroscopic follow up.

As shown in the plot, Wu et al. classify 59 candidates as probable 2.2<z<3.0 quasars (including 4 sources that lie just below the color cut). The majority (44) of those candidates had already been spectroscopically confirmed as quasars and Wu et al. acquired follow-up spectroscopic observations for 14 of the remaining 15 candidates using the Bok 2.3m Telescope at Kitt Peak and the 6.5m MMT Telescope at Mt. Hopkins. They confirm all 14 objects as quasars with redshifts between 2.36 and 2.88. Wu et al. also took spectra of 3 of the candidates that were flagged as likely stars. All three candidates lack emission lines and Balmer absorption features, so Wu et al. identifies them as stars. Since four of the other objects on the stellar side of the color cut had already been spectroscopically identified as stars and the remaining four objects are rather bright (i<14), Wu et al. are confident that their color cut successfully isolated the quasar and stellar samples.

After demonstrating the efficiency of the combined color and variability selection, Wu et al. apply their technique to a set of 643 variable quasar candidates with SDSS-UKIDSS nine-band photometric data. As before, Wu et al. plot the candidates on a Y-K/g-z color-color diagram and apply a color cut to separate likely quasars and stars. They find that 597 of the quasar candidates have colors that are consistent with identification of quasars and that 188 photometric redshifts between z=2.2 and 3. The candidates are not yet confirmed as quasars, but the authors anticipate that surveys such as the Baryon Oscillation Spectroscopic Survey (BOSS) in SDSS III will acquire spectra of the candidates in order to classify them as quasars or stars.