Today’s post features a paper that highlights the power of citizen science. Galaxy Zoo is one of several recent astronomy projects which allow anyone, not just scientists, to participate in cutting edge research. (See our citizen science glossary for more examples.) In Galaxy Zoo, participants are shown galaxies from the huge database provided by the Sloan Digital Sky Survey (SDSS), and asked to help out researchers by classifying them according to their types and features. With the help of over 250,000 volunteers, astronomers were able to create a catalog of millions of galaxies identified according to their structure. Today’s paper examines a subset of these galaxies, known as “dust lane early-type galaxies,” or dust lane ETGs. 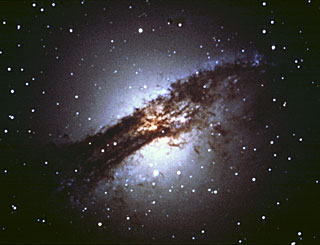 A dusty elliptical galaxy like those in the galaxy zoo sample. Image credit NOAO: http://www.spacetelescope.org/images/opo9814d/

Dust lane ETGs are elliptical galaxies with dust lane features, like the one shown in the image at right. The authors of today’s paper wanted to know how these galaxies form and evolve. In a companion paper, they showed that these dusty ellipticals are usually characterized by morphological disturbances and recent episodes of star formation, which lead them to believe that these galaxies may be the result of recent gas-rich minor mergers. To test this hypothesis, the authors decided to look for active galactic nucleus (AGN) activity, because of the many observational and theoretical links between starbursts and AGN: both are thought to be powered by reservoirs of cold gas, and a likely source of such gas in the low redshift universe is minor mergers.

To test the differences between the dust lane ETGs and the average elliptical galaxy, the authors use a control sample of regular elliptical galaxies, carefully matching the redshift range, mass range, and luminosity range of their dusty elliptical sample. Even before testing for AGN activity, this sample comparison allows them to show the environmental differences between dust lane ETGs and regular ellipticals, namely, the dusty galaxies are preferentially found in less dense environments. This is shown in the figure below. 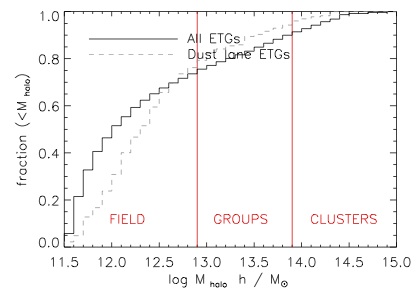 This figure highlights the fact that dust lane ETGs are preferentially found in less dense environments (the field) than the average elliptical galaxy.

The authors then move on to AGN selection, using two separate methods to detect AGN in their samples. The first uses a matching catalog of radio data. Radio luminosity in galaxies is primarily a result of either starbursts, AGN, or both. The authors use a correlation between infrared data, which is a good indicator of star formation, and optical data from SDSS to estimate the amount of radio luminosity in each galaxy that is due to star formation. Any excess radio luminosity is then attributed to an AGN. This allows them to select what are known as “radio-loud AGN”. The second selection method, called BPT analysis, involves emission line ratios in optical data (as Nathan discussed in this recent post). This leaves the authors with two separate AGN samples, radio and emission line, in both the dust lane early-type galaxies and the control sample of all ellipticals. 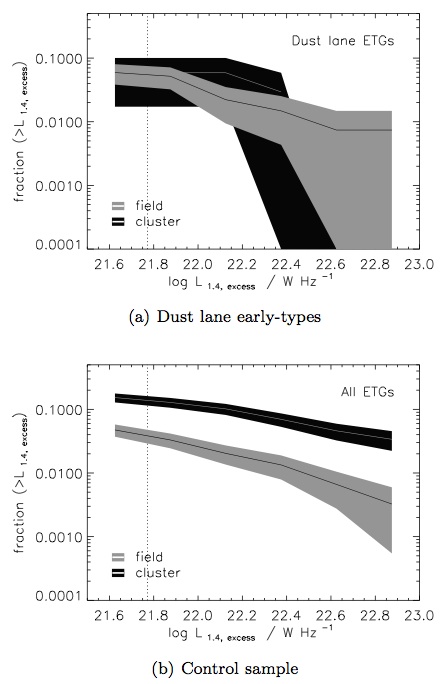 In the figure at left, the authors show the fraction of galaxies containing radio AGN for both the dust lane ETG sample and the control sample of all ellipticals. In the dusty galaxies, the radio AGN fraction does not appear to depend on environment, as evidenced by the fact that galaxies in the low dense field environment seem to have about the same fraction of radio AGN as galaxies in the more dense group and cluster environments. This is not the case for the control sample, which shows a much higher radio AGN fraction in the cluster environments. The authors take this as evidence that the AGN in dust lane ETGs are triggered by a common mechanism, namely a merger, which provides the influx of cold dense gas needed to turn on the AGN, regardless of environment. By contrast, a radio AGN in an average elliptical is probably a result of cooling halo gas falling onto the black hole, which occurs much more frequently in a dense environment.

This conclusion is further supported by the probability of finding an emission-line AGN in a galaxy with a radio AGN. In dusty ellipticals, the authors find a FAR higher probability (around 90%) than in the average elliptical, where the probability is closer to 30%. Because emission-line AGN are thought to be powered by a fairly rapidly accreting black hole, which is only possible with a large influx of cold gas, this supports their hypothesis that the dusty galaxies are probably a result of recent mergers.

So what happens to these dusty elliptical galaxies? Based on the evidence discussed here, as well as an analysis of stellar ages and radio AGN ages, the authors conclude that these dust lane ETGs are probably a transition stage between starbursting galaxies that have just undergone a merger, and the typical quiescent “red-and-dead” elliptical galaxy. This scenario plays out as follows. The merger provides a lot of gas to the galaxy, which initiates a starburst. Initially, winds from the supernovae in this starburst keep a lot of the gas from reaching the AGN, and the galaxy is seen as a blue elliptical, with little or no AGN activity. Within a couple hundred million years, however, the black hole starts to accrete gas and the AGN activity picks up. This initiates a phase of both starburst and AGN activity, which creates a lot of dust, hence the dusty galaxies that are seen. In another few hundred million years, feedback from the AGN blows out most of the gas (shutting off star formation), the dust is sublimated or dispersed, and the galaxy becomes a quiet, red elliptical.