Great discoveries are often made by simply asking “what if?”

We know other stars have planets. One of the ways we observe these is through the transit method, where the total light coming from the system is dimmed while the planet passes in front of the star. We know that certain stars have circumstellar disks (or multiple disks, if they are binary stars). These disks are observed with sub-millimeter and radio telescopes that are sensitive in the frequencies where the disk emission peaks. We know that before there are planets, there must be a protoplanetary disk; we also know that these two states must be connected through a (yet-to-be-fully-understood) evolutionary path which includes planet formation.

What if–if we were just so lucky–we found a protoplanetary system that had a disk, that was aligned so perfectly, and that was bright enough, and just happened to pass in front of ….

… another star. Well, Mamajek et al. propose that they have found such circumsecondary disk in Sco-Cen that transits another star (in fact, the primary star in a binary system), placing us in it’s shadow. This means that we can observe a protoplanetary disk while it is backlit, so that we may see its structure in all its glory. There’s been a lot of great discussion about protoplanetary disks on the arXiv lately, including a lengthy Annual Review by Phil Armitage (here). In the burgeoning era of sub-millimeter astronomy, protoplanetary disks have been under more scrutiny than ever before, and for good reason: they hold the key to solar system formation.

Using rapid photometric observations from the All Sky Automated Survey (ASAS) and Super Wide Angle Search for Planets (SuperWASP) missions, the team observed 1SWASP J140747.93-394542.6 = ASAS J140748-3945.7 (for now, lets just call it the Sco-Cen object) and found a very interesting transit light curve, one that lasted for days and showed significant substructure (see Figure 1). Within this light curve, there are periods that are relatively extinction-free, suggesting that these may be due to large gaps in the disk. The hourly variations in the lightcurve likely originate from the substructure of the actual disk. Other examples of stars with disks that may transit include ε Aurigae and EE Cep. The primary eclipses of ε Aurigae last almost 2 years! 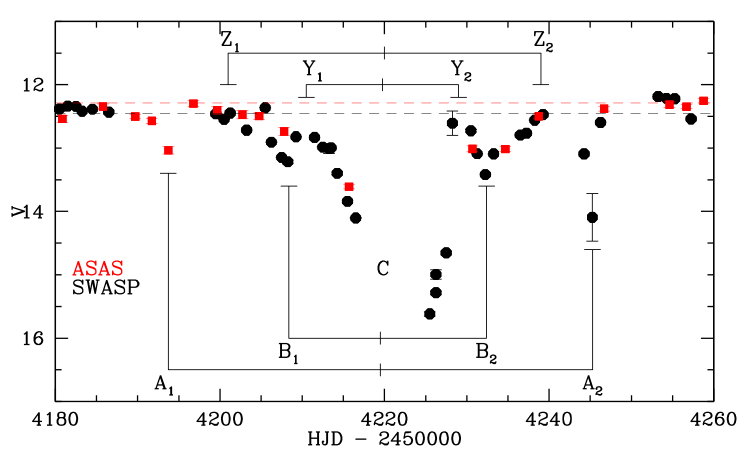 In order to reach an understanding of the significance of this oddly shaped lightcurve, Mamajek et al. estimate the timescale of the eclipse so that they may interpret the lightcurve in terms of different models. The authors postulate several physical scenarios that might explain the observed lightcurve:

The fact that the main star is non-accreting, and that there is a lack of any IR emission, suggests that the host object for the disk is a low-mass star or a giant planet. Most stars are in binaries, and this is especially true in young clusters. As a result of the star formation process, most stars will have a circumstellar disk around them. Two stars in a binary pair can easily be at different stages of evolution.

The authors propose the following as the most promising model. A circumsecondary disk around a faint and small secondary stellar companion (or giant planet) transited in front of the primary K5 star (that has no circumprimary disk). The disk has some gaps, which explain the substructure and periods in the lightcurve that are relatively free of extinction. A cartoon of the model is shown in Figure 2, and the expected fit to the lightcurve.

The authors’ model of the circumsecondary disk (right) as it transits in front of the primary K5 star, and the fit to the data (left).