As with so many other astronomical objects, classification of quasars is a tricky business. At the most basic level, quasars are often split into two categories based on their spectra: Type 1 quasars, which have broad emission lines (and a smattering of narrow ones), and Type 2 quasars, which have only narrow lines. The figure below shows the difference between a typical Type 1 spectrum, a Type 2 spectrum, and an elliptical galaxy spectrum. Different theories have been suggested which use an innate physical characteristic like accretion rate, or a geometric bias due to viewing angles to explain the differences between the two types of quasar spectra. (See this post for more on quasar unification.) But what happens if the lines comprising the most basic difference between these two types of quasars become blurred? The authors of this paper claim to have found a class of objects where this is the case.

This figure (from Trump et al. 2008) shows examples of three types of spectra: a broad-line AGN, a narrow-line AGN, and a normal elliptical galaxy.

“Anomalous narrow-line (ANL) quasars” is the name the authors give to these objects. They are quasars that appear to have broad lines, narrow lines, and some broadened narrow lines. Because they have broad lines, they are a sub-class of Type 1 AGN, but the authors choose to name them anomalous narrow-line quasars because it is the “anomalous” narrow lines in their spectra that distinguish them from normal broad-line AGN. The figure below shows the difference between a normal broad-line quasar spectrum and that of an anomalous narrow-line quasar. To categorize these objects, the authors follow a fairly standard line-fitting procedure, first fitting the continuum emission (the mostly flat green line), then fitting a broad Hβ line (the fat green gaussian), as well as a narrow Hβ line and two narrow [OIII] lines (the red peaks to the right). In particular, it is the width of the narrow Hβ line shown in this figure that is used to classify ANL quasars, but you may note that in this example (as in many of the objects in the sample), both the narrow componant of Hβ and the [OIII] doublet to the right are broader in the anomalous spectrum. Due to space constraints, I won’t go into the details of all of the different line components that the authors investigate in the paper, but two important points they make are these: (1) the gas velocities implied from the widths of the broadened narrow lines are far higher than previously thought possible given the region in which they are supposed to be produced, and (2) the widths of the narrow Hβ and narrow [OIII] lines are often correlated with the width of the broad component of the Hβ line. (For more information on continuum emission, emission and absorption lines, and the Balmer series in Hydrogen, see this site.) 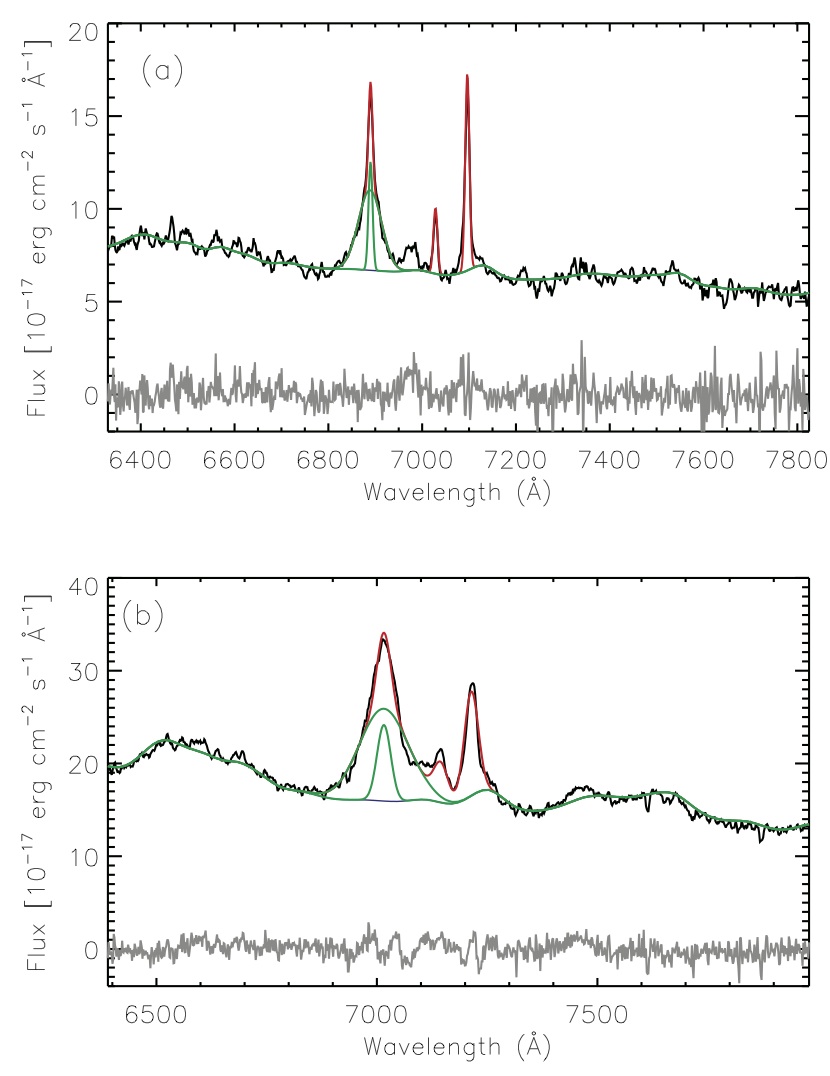 This figure shows the difference in spectral features between a normal broad-line quasar (top), and an anomalous narrow-line quasar (bottom). The total fit is shown in red; the continuum and several line fits are shown in green.

So what does the existence of these anomalous objects imply for our standard quasar picture? Perhaps the most important issue is related to the second point I mentioned above – the velocities implied by the broadened narrow lines. Starting at the central black hole and moving outward, the standard picture of a type 1 quasar consists of:

The fact that [OIII] can only be produced in low density environments means that it cannot come from the accretion disk or high-density broad-line region. However, the velocities implied by some of these lines are ~ 2000 km/s, about four times faster than the velocities usually seen. Similar velocities are deduced from the width of the narrow Hβ line, but the fact that there is also a separate broad Hβ component means that those two lines cannot come from the same region. In addition, the fact that the widths of the broadened narrow lines are often correlated with the width of the broad Hβ component suggests that although the lines are being produced in different regions, they probably have a common cause. On the other hand, CIV, another broad line, does NOT appear to be correlated with either Hβ component, which is puzzling given that it is thought to be produced in a region physically between the broad and narrow Hβ lines.

In the end, the authors are unable to come up with an explanation for these ANL quasars that can satisfy all of the features and correlations they find in the spectra. One of their more promising ideas invokes some sort of outflow from the broad-line region, which also suppresses star formation, but even this picture still presents some mysteries (see the paper for more details). Even without devising a consistent theoretical origin for these objects, however, the authors have presented an intriguing picture that will likely prove an important piece in the puzzle relating quasars, outflows, and the connection between supermassive black holes and their host galaxies.