When we dream of other worlds, there is one thing that drives our fantasies of life above all else: water.  Most organisms on Earth rely on this molecule for survival.  Although we might imagine life forms that do not require water, planets with water are the most obvious places to search for life—or at least for life as we know it.

Thus, the discovery of the first potential “water world” in 2009 was a turning point in exoplanet science.  At the time, I was a senior at Harvard University working with David Charbonneau, whose team and their robotic telescopes discovered the super-Earth GJ 1214b when it transited its star.  In a Nature publication, Dave describes the discovery.

The planet is just the right density to be made entirely of water.  However, the discovery of GJ 1214b only suggests its watery nature; the planet could have a dense, rocky core and a large but light atmosphere of hydrogen and helium instead.

To distinguish between these possibilities, several groups have performed transmission spectroscopy.  This technique measures the starlight that passes through the planet’s atmosphere while the planet transits its star.  By measuring the light transmitted at different wavelengths, it is possible to construct a spectrum of the planet’s atmosphere.  Absorption and emission lines in the spectrum can reveal chemicals in the atmosphere.

Counter-intuitively, the scientists studying GJ 1214b are not looking for spectral lines due to water.  Models show that adding water vapor to the atmosphere of GJ 1214b would flatten the spectrum, smearing out all features.  However, a high layer of clouds could also produce such a spectrum, so a flat spectrum does not prove that there is water in the planet’s atmosphere.  Alternatively, GJ 1214b could consist of a hydrogen and helium atmosphere (similar to the atmosphere of the sun) enveloping a rocky core.  This type of spectrum would be rich in spectral features.

This week, while I was at the Extreme Solar Systems II conference in Jackson Hole with several of the Astrobites authors (see Ellie’s and Courtney’s posts), several scientists presented new measurements of transmission spectroscopy through the atmosphere of GJ 1214b.  Jacob Bean and Zachory Berta made measurements consistent with a flat spectrum, which support a water-rich atmosphere or high-altitude clouds.  On the other hand, Bryce Croll finds evidence of spectral features in several wavelengths in favor of a hydrogen-helium (or “solar composition”) atmosphere.  While all authors emphasize that their results are very preliminary, the discrepancy exists for the time being. 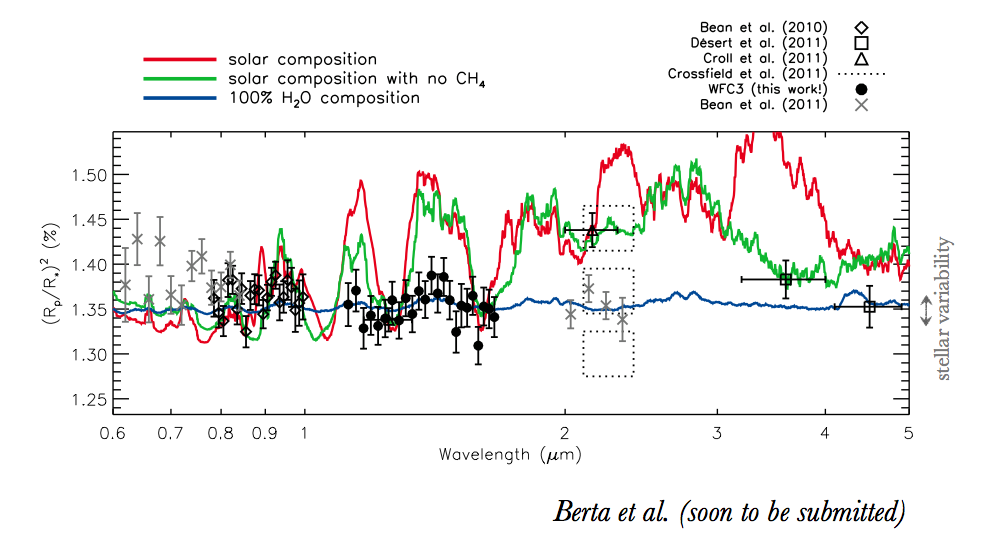 To complicate matters further, Nikku Madhusudhan showed that different ratios of carbon to oxygen in models of solar atmospheres dramatically alter the spectrum.  Although he did not relate these results to the GJ 1214b measurements, Madhu’s results open the door to a new family of hydrogen-helium models that could explain the planet’s puzzling atmosphere.

While most of the measurements made to date suggest a flat spectrum for GJ 1214b’s atmosphere, additional measurements of the spectrum, increased measurement precision, and better tuning of the model atmosphere spectra will refine our understanding of the atmosphere’s composition over the coming years.  Even if scientists rule out hydrogen-helium atmospheres, distinguishing a water atmosphere from a layer of high-altitude clouds (which could be made of something other than water) will be challenging.  There is plenty of science yet that lies between our current understanding of GJ 1214b and the coveted discovery of water on an exoplanet.