Evidence for a Universal IMF from a Dwarf Galaxy

Paper: An IMF Study of the Dwarf Starburst Galaxy NGC 4214 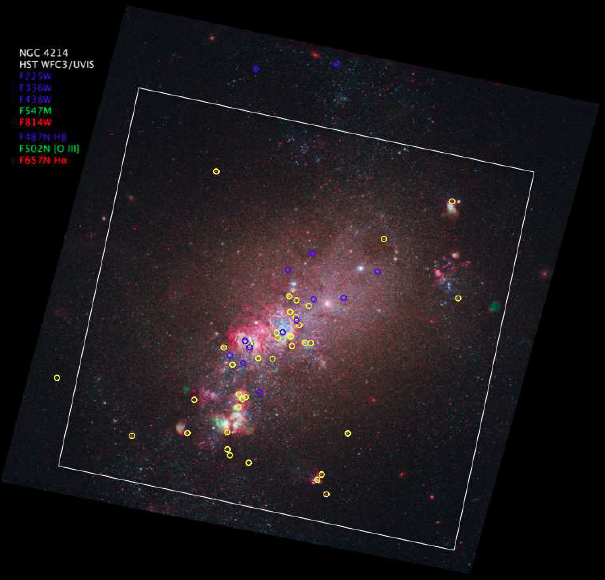 The galaxy NGC 4214, with the 52 star clusters in the Andrews et al. sample circled in yellow (detectable Hα emission) and blue (no Hα emission detected).

The stellar Initial Mass Function (IMF) describes the relative numbers of stars of different masses in a newly formed stellar population. We’ve known for over 50 years that the high-mass end of the IMF is well described observationally by a power law with a slope of about -2.35, and that it probably cuts off around the highest possible stellar mass. Furthermore, the general shape of the observed IMF is naturally recovered in simulations, regardless of the detailed physics at work (see this astrobite by Nathan G. for more background on power laws and the IMF). However, there remains great debate as to the universality of the IMF — whether it should have the same slope or cutoff in different environments. The baseline assumption is traditionally a universal IMF, but there have been a growing number of studies that seem to suggest that such a simple picture is misleading at best. These previous Astrobites discussed two such examples, which showed evidence for differences in the IMF between different galaxies. In the paper that is the subject of today’s Astrobite, Andrews et al. look for variations in the IMF within a single galaxy, specifically the dwarf galaxy NGC 4214, by examining a sample of its star clusters. Their results are consistent with a single, universal IMF within this galaxy.

In nearby regions of our own Galaxy, the IMF can be directly estimated by counting the number of stars having different masses, after correcting for the fact that many of the more massive stars are no longer around (this was the basis of the original paper on the subject by Salpeter in 1955). Measuring the IMF in more distant regions – even in the nearest galaxies – is much trickier, as individual stars can no longer be resolved, and thus indirect methods must be used. One of the most common such methods exploits the difference in mass-to-light ratio between high- and low-mass stars. As described in this astrobite, massive stars are disproportionately luminous as compared to less massive stars. Thus a group of stars with a “top-heavy” IMF – one in which there are a larger number of massive stars than one would expect assuming a “standard” IMF – will have a low mass-to-light ratio, while a group of stars with a “bottom-heavy” IMF will exhibit a high mass-to-light ratio. The amount of light can be measured directly through observations, while the mass can generally be inferred by comparing observations with models (such as the population synthesis models used here; see below). Thus the mass-to-light ratio can be estimated even when the individual stars cannot be resolved.

Andrews et al. used Hubble Space Telescope observations of the dwarf galaxy NGC 4214 to measure the emission from star clusters in the galaxy at wavelengths from the ultraviolet to the near-infrared. Having such a broad wavelength coverage allowed them to construct a spectral energy distribution (called an SED), which shows how emitted flux varies with wavelength, for each star cluster; SEDs of different kinds of clusters appear very different, and thus serve as excellent diagnostic tools for deriving cluster properties such as age, mass, and extinction. To quantify these properties, they compared their observed SEDs to those predicted from population synthesis models. Population synthesis models are described in some detail in this astrobite; in essence, they produce SEDs of a group of stars as a function of time, given input parameters such as the total mass of stars in the group, the metallicity, and the choice of IMF. For each cluster, the age, mass, and extinction of the model that best matches the measurements are adopted as the age, mass, and extinction of that particular cluster. In addition to the broadband observations just described, Andrews et al. also obtained measurements in a narrowband Hα (“hydrogen alpha”) filter.  Hα is the transition from the n=3 to 2 energy level in hydrogen, and is a signpost of ionized gas. Concentrated areas of Hα emission are found in HII regions, which are bubbles of ionized gas around young, massive stars. Thus Hα is a direct probe of recent star formation.

Results: A universal IMF, at least in this galaxy 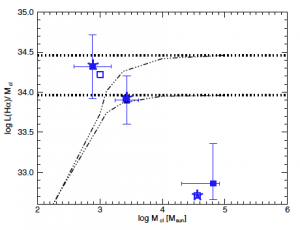 Ratio of Hα luminosity to mass for star clusters of in NGC 4214 (blue data points). For a universal IMF, this ratio will be constant as a function of cluster mass (dotted horizontal lines). A mass-dependent IMF will instead show a steep decrease in Hα-to-mass at the low end (dot-dashed lines).

To investigate how top-heavy the IMF is in clusters of different masses, Andrews et al. compute the ratio of Hα luminosity to cluster mass as a function of the cluster mass. To improve their statistics, they combine clusters having similar masses into three mass bins of average masses of 750, 2200, and 40000 M☉. The figure to the right shows these three data points compared with predictions from a universal IMF (the horizontal lines) and from a variable IMF (the lines that curve downward at low cluster mass). Based on the two data points on the left side of the figure, the IMF does seem fairly universal in this galaxy, or at least not increasing in the same sense as would be predicted by a cluster mass-dependent IMF. The authors suggest that the low-ratio data point at high cluster mass is a result of the fact that higher mass clusters often expel a large amount of the gas surrounding them, and thus the Hα measurement is not recovering the true ionizing photon rate from the massive stars in the cluster.

One of the forms a variable IMF might take is a dependence on cluster mass of the most massive star that could be found in a cluster. Specifically, it was proposed in previous work that clusters having a total mass in stars of 1000 M☉ are limited to having a 30 M☉ star as the most massive, while higher mass clusters could have stars up to the maximum allowable stellar mass (perhaps 120 M☉ or more). The alternative is that the entire IMF is fully sampled no matter the cluster mass. In this case, the idea of stochasticity comes into play: for a low mass cluster, the IMF might predict, say, 0.5 stars of 50 M☉; this just means that on average only every other cluster of that mass will have a 50 M☉ star. The authors test this idea (see the figure below) by looking at the most massive star in the best-fitting model for each low mass star cluster observed, and find that for clusters around 1000 M☉, 50% of them have a more massive star than 30 M☉, in disagreement with the proposed cutoff. In fact, they see the full range of 10 to 120 M☉ as the most massive star, consistent with a universal IMF and stochastic sampling. 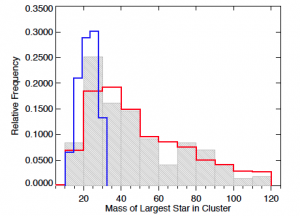 Histogram of the most massive star in the model that best represents each low-mass star cluster (shaded bins) compared to predictions from a universal IMF (red) and an IMF which has a cutoff at 30 M☉ (blue). The results show no evidence for such a cutoff.

Of clusters and galaxies

Of course, even if one galaxy has a single, universal IMF, that is not proof that the same IMF could describe stellar populations in every galaxy at all redshifts. The technique used in this paper is promising – it only requires measurements of integrated light from groups of stars, avoiding the need to resolve individual stars. It can thus be applied quite broadly, facilitating comparison of the IMF across the local Universe. But there remain many open questions; for example, this technique relies on tracers of high-mass stars and suggests a universal IMF, while the one discussed in Kim’s astrobite examines low-mass stars, and finds evidence for IMF variations. The two approaches aren’t necessarily contradictory, and demonstrate that the problem is not straightforward. One thing is certain: the ongoing debate as to the universality – or lack thereof – of the stellar initial mass function will no doubt continue.