In today’s astrobite, we continue our overview of the papers from the first Planck data release. Our first astrobite covered two of these papers: an overview of the entire data release (Paper I), and Paper XXIV, which discussed evidence for non-gaussianity in the data. This time, we review papers XVII and XXIII, which discuss weak gravitational lensing of the Cosmic Microwave Background (CMB), and the isotropy of the Universe at the time this background radiation was emitted.

If you have just tuned in, you need to know that the Planck satellite has been observing the sky and measuring the fluctuations in temperature of the CMB to exquisite precision. The correlations of those fluctuations give us information on the cosmological parameters that determine the evolution of the Universe. You might be familiar with previous experiments, such as COBE or WMAP, or with experiments that probe smaller scales, such as ACT or SPT. Planck has increased resolution and sensitivity compared to WMAP, and it observes in 9 bands instead of just 5. If you want to read more about Planck, this is the official page, and this is the list of papers submitted as part of the 2013 release.

The path of photons is altered by the presence of matter. If you look at the CMB in a given direction on the sky, most likely the light did not come from that direction originally. It came from another direction, not too far off (~2 arcminutes), and was deflected along its way to us by the intervening large-scale structure. This effect is known as weak gravitational lensing, and we have discussed it extensively in this astrobite, this one, and this one. The topic of this paper is the lensing of the CMB as measured by Planck. We discussed previous measurements of CMB lensing in this astrobite. 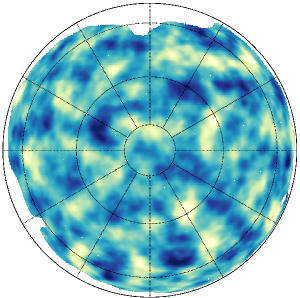 The Northern map of the reconstructed lensing potential, mapping the total matter along the line-of-sight to the CMB. Adapted from Figure 8 of the Planck Collaboration XVII paper.

While the CMB depicts our Universe when it was about 380,000 yrs old, CMB lensing is caused by the intervening matter and thus allows us to retrieve information about the evolution of the Universe. Observationally, it causes a correlation between the temperature on the sky and its gradient, or how quickly the temperature changes from one place to another. By measuring this correlation, one can reconstruct the “lensing potential”, which is related to the total mass along the line-of-sight and which we show in the figure to the right. Recovering this information is far from simple, one has to remove sources of contamination: the Milky Way, extended nearby galaxies, whole clusters of galaxies subject to Sunyaev-Zeldovich effect, dust, etc. Having several bands in which Planck measures the CMB (100, 143 and 217 GHz) helps remove systematics and biases, since one has to make sure the results in all bands are consistent.

The lensing power spectrum, the correlated variations of the lensing potential as a function of scale, can also be measured, and we show it in the figure below. While previous experiments had already detected this effect in the CMB, Planck has measured it at a higher signal-to-noise level, allowing it to be used as a source of cosmological information. At intermediate scales, the power spectrum is consistent with the expectation from a Lambda-CDM model constructed without the lensing power spectrum. This is not trivial: the information we have from the Universe when it was 380,000 yrs old succeeds in predicting what the Universe is like much later.

The CMB lensing power spectrum measured by Planck in 3 different bands and combining the lowest noise bands, 143 and 217 GHz (MV). Adapted from Fig 10 in the Planck Collaboration XVII paper. The x-axis is the lensing multipole, L.  Small L corresponds to large separations on the sky. The “intermediate scales” quoted in the text correspond to 40<L<400.

What do we learn from CMB lensing? Its power is that it lifts (partially) some degeneracies between cosmological parameters. A degeneracy is when we cannot measure two or more parameters separately, but one measures them in a particular combination. Lensing, moreover, distorts the temperature anisotropy power spectrum, most notably, by smoothing the acoustic peaks. Hence, when trying to determine the cosmological parameters, it is better to take lensing into account. For example, lensing helps determine whether the Universe is flat, it gives evidence of the existence of dark energy just from the CMB, it is crucial for a detection of the integrated Sachs-Wolfe effect (the topic of this other Planck paper) and it gives information on the connection between luminous and dark matter.

There remain some open questions. There is some tension between the Lambda-CDM model parameters inferred from the temperature and polarization data and the lensing power spectrum at very small and very large scales that could be due to systematics. The constraints on neutrino masses from adding lensing are also puzzling and likely to be revisited in the next Planck release. All in all, Planck has shown there is a wealth of information in CMB lensing that is just beginning to be explored.

So far, we have seen from these Planck data that our Universe has more dark matter than we realized, it is expanding more slowly than we thought (and so it is slightly older), and finally that the temperature fluctuations in the CMB (and thus the initial density fluctuations in the Universe) appear to vary in a Gaussian way. But, do these fluctuations look the same in every direction, on all of the spatial scales probed by Planck? Surprisingly, the answer appears to be no!

Why is this so surprising? Well, there is this idea called the cosmological principle, which states that everywhere you go, the Universe on large scales is exactly the same (it is homogeneous) in every direction you look (it is also isotropic). This might seem like a problem, as currently, or 380,000 years ago when the CMB radiation was emitted, pieces of the Universe are so far apart that they should never have been causally connected (light from one ‘end of the Universe’ cannot reach the other end in the Universe’s lifetime) and should not ‘know’ about conditions elsewhere in the Universe. Luckily, Inflation saves the day and tells us that if the Universe ballooned in size very early on, everything we see (what began as quantum fluctuations, grew to be the observed temperature variations in the CMB, and eventually becomes enormous galaxy clusters) originated from a time when everything was much closer together and causally connected. So, it is okay that the Universe at the time of the CMB should look EXACTLY same — the same temperature, the same-sized fluctuations in temperature– in every direction you look. Except, now Planck is telling us that the Universe back then DOESN’T look the same in every direction. What is going on??!

First of all, this idea is not new. Results from WMAP already indicated several potential deviations from isotropy, such as an anomalously cold spot, however the new Planck results are a strong confirmation of this anisotropy.

In particular, these findings show that if you divide the CMB map into two hemispheres along a certain axis, there is more power  in one hemisphere compared to the other (the size or amplitude of the temperature fluctuations is bigger), as you can see in the power spectrum in the upper panel of the figure below. This appears to be true on all spatial/angular scales: basically, no matter how you might smooth the map, the fluctuations in one half would still appear larger than the other. However, the power difference is especially noticeable for fluctuations on the largest scales (the lowest multipoles or smallest l in the power spectrum), as can be seen in the lower panel of the below figure. Bottom line: one half of the Planck sky– and so possibly, one half of our Universe! — does not look like the other. 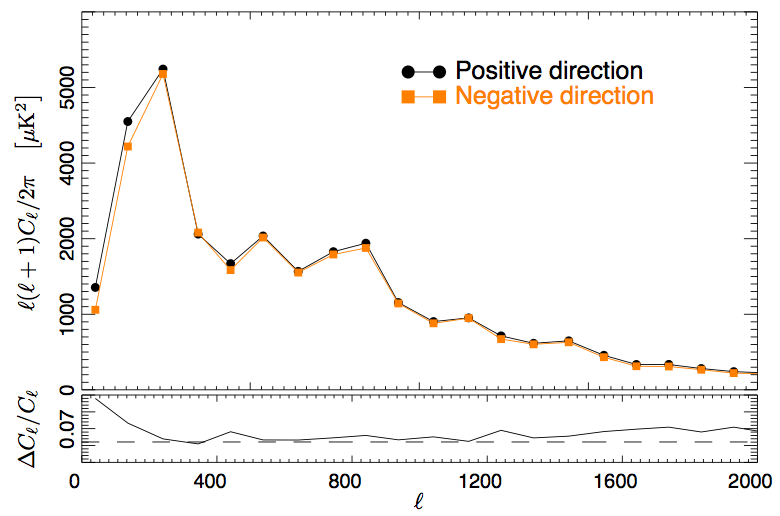 This paper speculates briefly on what could give rise to this anisotropy. Contamination from KNOWN emission in our Galaxy and our solar system are both ruled out, but it is still possible that this result is a local artifact (perhaps diffuse solar system emission, or even contamination from the local universe below a redshift of 3), and not a cosmological feature. If, however, the observed anisotropy is indeed a property of Universe we live in, then theories such as inflation (which should give rise to the perfectly isotropic Universe which we DON’T see) may need to be revisited!