As an observer, I’m sometimes tempted to avoid papers dealing with theory or numerical simulations—not because they aren’t interesting or important, but because I am much more familiar with the ideas and jargon used in observational papers. In the case of galaxy formation and evolution, though, this can be dangerous, as numerical simulations of evolving galaxies occasionally give us conflicting information about what’s actually going on out there in space. So, just as it’s important for simulators to take into account the observational facts about galaxies, it’s important for an observer like me to understand what simulators are actually doing and what the limitations of their codes are.

The paper we’re going to discuss today is a little older than some of the ones you see on astrobites (it was put on astro-ph back in January), but it’s a great example of the exciting work being done to help numerical models of galaxies and other astrophysical objects look more like their real-life counterparts. Dylan Nelson and his collaborators use the moving mesh code AREPO (which was introduced in this astrobite and then talked about again here) to investigate “cosmological gas accretion” (i.e., gas pulled onto galaxies by gravity) and compare it to results from another code called GADGET, which uses smoothed particle hydrodynamics (which I’ll talk about more in a second) to track the gas physics. The punchline? Although AREPO may have some problems of its own, it better captures the small-scale turbulent physics which is important for building an accurate picture of what’s going on during galaxy formation. 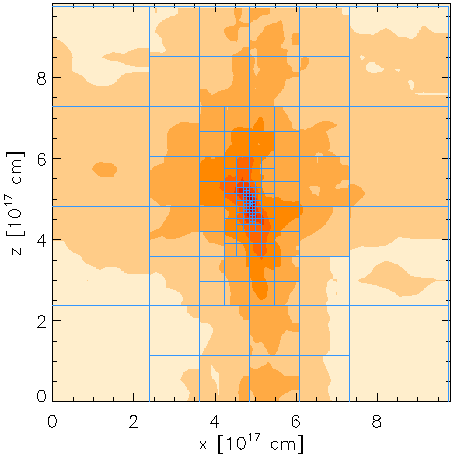 Figure 1: An example of the grid structure in a code using FLASH, where the adaptive mesh refinement (AMR) criterion was based on density. Note that the regions of highest density (darker orange and red) have the smallest cells, whereas regions without much gas (light orange) have larger cells. Original figure from the University of Heidelberg’s star formation group.

For those of you who weren’t readers when Nathan Goldbaum talked about AREPO before, I’ll give a brief review of numerical simulations as they’re used in astrophysics today. For a long time, there have been two major classes of numerical simulations, one which relies on a Eulerian framework and one which employs a Lagrangian technique; this video does a good job explaining the difference between the two. In Eulerian grid methods, the code focuses on volume elements through which a fluid passes, which has the advantage of accurately capturing sharp discontinuities and shocks, but doesn’t allow you to track the history of individual fluid elements. Figure 1 shows an example of an Eulerian grid for a simulation using FLASH, which uses adaptive mesh refinement (AMR) to make sure the regions of highest resolution follow the regions of most interest (i.e., where all of the gas is). Codes that use Lagrangian techniques instead follow individual parcels of fluid as they move through space, which allows you to record a history for that fluid element, but ends up suppressing instabilities and making it more difficult to resolve discontinuities. If it’s hard to understand why that might happen, imagine trying to measure the density at a point in space between two gas particles. Even though there’s nothing at that specific point, we know that the density of the gas in that region isn’t actually zero, and smoothed particle hydrodynamics (SPH) codes essentially smooth over the distribution of nearest particles in order to estimate the fluid properties at that point. AREPO is a different kind of beast altogether, using a moving mesh based on a set of grid-defining points to deal with the hydrodynamics, a technique that allows you to track the history of gas elements and have the resolution follow the flow of gas (which happens automatically in SPH) while also treating shocks more physically (like mesh-based AMR codes).

The AREPO team has compared its performance versus GADGET (an SPH code) in a series of papers on moving mesh cosmology, which includes the Nelson paper. In all cases, the same physics is put in to both AREPO and GADGET, so any differences that arise are purely because of the numerical method used to evaluate the hydrodynamical equations. This is an important exercise, especially for cosmological gas accretion, because simulations have long made predictions which are not in line with observations of actual galaxies, causing a fair amount of confusion about how galaxies get their gas.

One of the first ideas about gas accretion onto galaxies was that the infalling gas would shock-heat to the virial temperature of the galaxy’s dark matter halo. Essentially, gas falling onto large, massive galaxies would get very hot and then have to cool before it could form stars; in small galaxies, the gas wouldn’t get heated as much and could potentially form stars sooner. This eventually led to the idea of two modes of accretion, a cold mode and a hot mode, which was supported by evidence from simulations. Unfortunately, observations of gas accretion are less conclusive, with the few scraps of evidence we have suggesting that the two-mode picture may not be the whole story. The question the Nelson paper answers, then, is whether our picture of gas accretion, which is mostly informed by SPH codes, changes now that we have a different way to deal with hydrodynamics in cosmological simulations.

Figure 2: The mass-weighted temperature projection of gas surrounding a galaxy in GADGET (left panel) and AREPO (right panel). In GADGET, the hot component is much more extended than in its AREPO counterpart, which is the result of spurious heating keeping the gas artificially hot in GADGET.

And the answer is  “yes”. Gas accretion onto galaxies does look different in AREPO than in GADGET, especially for the most massive galaxies, where a larger portion of the gas is heated to higher temperatures but manages to cool onto the central galaxies. One big issue seems to have been the effect of spurious viscous heating in GADGET, which keeps gas artificially hot and causes the formation of large, extended halos. In AREPO, the same kinds of galaxies have a much smaller spatial extent, since the code more realistically captures the heating and cooling processes in the gas (see Figure 2). The final tally shows that, although slightly less cold gas is accreted in AREPO, nearly 10 times more hot gas ends up in galaxies than in GADGET, leading to an overall increase in the amount of gas that makes it into galaxies during their formation. This is an exciting albeit troubling new development, which demands a more careful investigation using simulations that include feedback and outflows, two important factors in the movement of gas into and out of galaxies. Hopefully then we’ll be closer to understanding how galaxies today ended up looking the way they do.