Young stars are surrounded by a protoplanetary disk from which planets form. Over time, the gas in the disk dissipates, leaving behind the solid material (planets, dust, and everything in between) in a debris disk. A star is typically 10 million years (Myr) old when the transition from the protoplanetary disk phase to the debris disk phase takes place — although this age varies from star to star.

The star called 49 Ceti does not fit nicely into this picture. Previous observations have found two dust belts around 49 Ceti, an inner warm component and an outer cold component — a pattern common in the debris disk phase. However, carbon monoxide (CO) gas has also been detected in this disk, a feature usually only found in protoplanetary disks. Estimates of 49 Ceti’s age range from 9 to 61 Myr, with the most recent measurement at 40 Myr (in general, determining the age of a star can be difficult business). One explanation for these discrepancies is that 49 Ceti has an unusually long-lived protoplanetary disk. Another theory is that the CO gas is not primordial, but is being continuously generated from evaporating comets or colliding planetary material.

To get a handle on 49 Ceti’s true nature, the authors of this paper (including fellow Astrobites writer Jessica Donaldson) studied it in the far-IR and sub-mm (wavelengths where debris disk dust emission is typically strongest) with the Herschel Space Observatory. They obtained photometry to model the spectral energy distribution (SED) of the disk, one resolved image to constrain the size of the disk, and spectra to search for emission lines from gas.

The authors then create an SED of 49 Ceti using this new photometry plus data from the literature at wavelengths both longer and shorter than their Herschel measurements. The SED is shown in Figure 1. They fit the SED with a model consisting of the star plus one or two blackbody emission profiles representing the dust belts in thermal equilibrium, with temperatures set by their distance from the star. The blackbody curves are modified to suppress emission at very long wavelengths because grains emit radiation inefficiently at wavelengths much larger than their own size. The authors find that one blackbody cannot fit data at all wavelengths consistently, but two blackbodies (at temperaures of 175 and 62 K) fit the data nicely.

Based on these temperatures, the authors estimate that the rings are located at 11 and 84 AU from the star, but these distances are only lower estimates because realistic dust grains can be hotter than their equilibrium temperature, and thus seem closer to the star than they actually are. Nevertheless, this confirms that the dust around 49 Ceti is confined to two discrete rings, a feature of debris — not protoplanetary — disks. 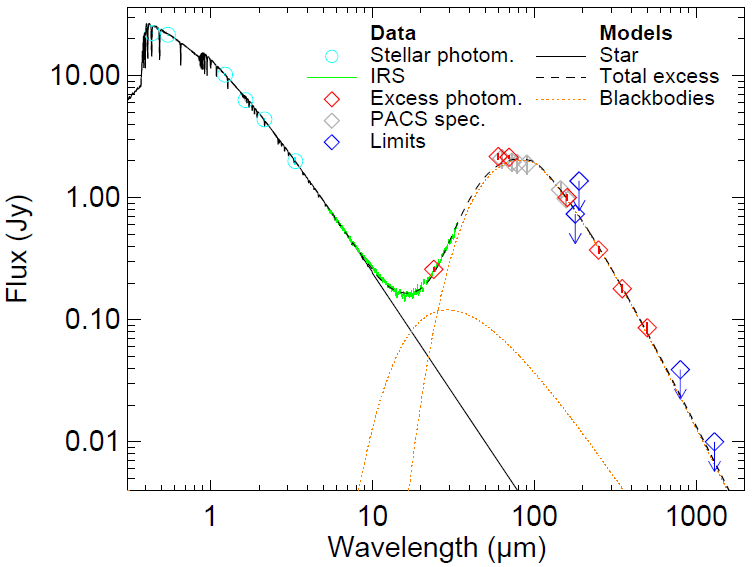 Figure 1. The SED of 49 Ceti. The new data from Herschel are shown along with previous data from the visible to the millimeter regime. The emission from the star and the best-fit two-blackbody model are plotted with the data. From Figure 4 of the paper.

The image at 70 microns with PACS was spatially resolved. Resolved images are very useful because they allow a disk’s true size to be determined; an SED can only estimate the minimum disk size (as discussed in the previous section).

This image traces the cold outer dust component of 49 Ceti’s disk. They find that the disk extends to 200 AU, larger than the estimate from the SED. Previous studies found that the CO gas in this disk was also coming from 200 AU, suggesting that the gas may be arising from the same location as the solid material.

Figure 2. The left panel shows the resolved 70 micron PACS image of the 49 Ceti disk. The PSF observation of Alpah Boo is shown in the insert. The right panel shows 49 Ceti’s disk after deconvolving the image with the PSF. From Figure 1 of the paper.

The only gas they detect is C II, emitting at 158 microns. Protoplanetary disks commonly show emission from O I at 63 microns, so the fact that this gas was not detected in 49 Ceti suggests that the gas in this disk is not simply leftover from the protoplanetary disk phase. The detection of the ionized carbon and the non-detection of the oxygen are shown in Figure 3. 49 Ceti is one of only two known disks in which C II is detected while O I is not (the other is around the star HD 32297).

Figure 3. PACS spectra of the O I emission line (left panel, not detected) and C II line (right panel, detected). From Figure 2 of the paper.

The authors create physical models of the disk in an attempt to explain their observations, and they start with a model that assumes 49 Ceti has a long-lived protoplanetary disk. They use a computer code that includes various heating and cooling mechanisms for dust and gas in the disk, as well as chemical and physical reactions involving dust and numerous gas species. Despite tweaking the model’s many parameters, the authors could not match their data, most importantly the presence of of C II and CO (known from the literature) and the absence of O I.

The authors are not able to create a model of this same complexity to test the second scenario — that the gas is being generated from comets — because not enough is know about all the sources of potential carbon and oxygen gas. However, by estimating the rate at which CO is destroyed in the disk (based on the expected flux of molecule-breaking ultraviolet radiation), they use the known amount of CO to determine how fast new CO is being produced. At this rate, a large comet would be depleted in 0.4 to 32 Myr. So this explanation is plausible, given 49 Ceti’s range of possible ages.

So what is 49 Ceti? Two theories existed originally: it is either a long-lived protoplanetary disk or a gas-generating debris disk. These new Herschel observations point strongly towards the second interpretation. If gas truly comes from evaporating comets or colliding planetary material, these observations could be used to learn more about the composition of pre-planet material and the nature of the planet-formation process.

The Herschel mission has recently come to an end (the all-important coolant is depleted), but the work of analyzing and interpreting the data will continue, so expect new results from Herschel to keep hitting astro-ph. And while Herschel has passed, astronomers are looking to ALMA and JWST (in the sub-mm and infrared, respectively) to further our understanding of circumstellar disks and the formation of planets.

Planet Formation on a Budget