Of particular interest is the relative amounts of carbon and oxygen that a planet possesses, as this balance has a huge impact on the planet’s chemistry. For instance, an oxygen rich planet like the Earth (low C/O ratio) will support water vapor in its atmosphere, while the atmosphere of a planet with a high C/O ratio will have very little water and will support methane gas (CH4) instead. For more details about classifying planets by their C/O ratio, see this astrobite. Some of the exoplanets that have already been discovered may be carbon-rich, as discussed in these astrobites.

The subject of this paper is terrestrial planets, meaning rocky planets like the Earth, rather than large gas giants. Terrestrial planets form from the collision and conglomeration of smaller objects called planetesimals (think asteroids). These planetesimals are formed in the protoplanetary disk of gas and dust that surrounds a star for the first several million years of its life.

The first part of the simulation presented in this paper models the evolution of the protoplanetary disk itself. The disk starts hot and dense but gradually cools and dissipates. Specifically, the model predicts the temperature, pressure, and density at each location in the disk over time. The model also keeps track of the movement of material throughout the disk.

Figure 1. The abundance of various elements in the resulting planetesimals vs orbital distance for two planetary systems (top and bottom) as predicted by the old (right) and new (left) models. In the new models, elements were more evenly distributed throughout the disk, as expected by following the disk’s evolution, as opposed to determining the abundances from a single snapshot in time.

The original composition of the disk is assumed to be identical to the star itself (they both form from the same primordial material), but as the disk evolves, its composition changes. In the initially hot disk, most material exists in a gaseous state. As the disk cools, more and more material freezes out into a solid form. The order that chemical compounds become solid is called the “condensation sequence”. The first compounds to freeze out are the “refractory” materials, like metals and rocks, with high sublimation temperatures. Later, when the disk is cooler, the “volatile” materials with lower sublimation temperatures, like ices, condense. Materials with very low sublimation temperatures, like hydrogen and helium, always remain gaseous. The authors’ model predicts the abundances of gaseous and solid materials at each point in the disk according to the local physical conditions. To complicate the picture, the various compounds react chemically with each other, forming  new compounds with new properties. The model accounts for this by simulating the network of chemical reactions that could occur in the disk. 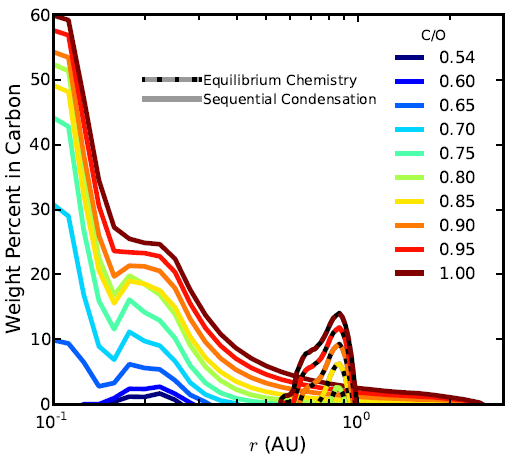 Figure 2. The abundance of carbon in the resulting population of planetesimals for various initial disk C/O. The old models are shown in dashed lines. This illustrates one of this papers main results: carbon-rich planets can form from lower carbon environments than previously thought.

Once material becomes solid, it can be incorporated into the growing planetesimals. As the disk evolves, some of the gaseous material is removed from the disk, while material trapped in planetesimals remains. Thus, volatile elements are underrepresented in the final composition of resulting planetesimals compared with refractory elements relative to their initial abundances in the disk.

The authors ran their simulations for several different initial disk compositions, and examined the composition of the resulting planetesimals with an eye to their carbon vs oxygen content. They found that for systems with low initial C/O ratios like the Solar System, their new simulations did not produce significantly different results from the older, simpler simulations. However, systems with slightly higher C/O ratios ended up with more carbon available for planet formation than in the older models, and the carbon was distributed throughout a greater extent of the final disk of planetesimals. Figure 1 compares the resulting abundance profiles of the new and old models for two high C/O systems. Figure 2 shows the resulting carbon abundances for a range of initial C/O ratios. The older models required C/O > 0.8 to make carbon-rich planetesimals, whereas this new and more accurate model only requires C/O > 0.65. Thus, carbon-rich planets are likely more common than previously thought.

As a final step in their simulation, the authors modeled the formation of terrestrial planets from these planetesimal populations. Figure 3 shows the result for one high C/O ratio system. The outcome of the old model is in the top row, and the new model results are in the bottom row. In both cases, three planets were formed, but the inner two planets were nearly identical in both models. Interestingly, the extra carbon available for planet formation according to the new models all ended up in the outermost planet.

Figure 3. The compositions of three terrestrial planets formed in a high C/O environment by the old (top) and new (bottom) models. The additional carbon available for planet formation in the new model ends up primarily in the outer planet.