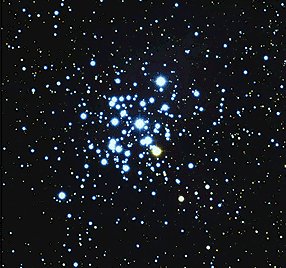 Figure 1 – Open star cluster – the birthplace of most stars, including the sun.

Meibom et al. found two mini-Neptunes transiting sun-like stars in the 1 billion year-old open star cluster, NGC6811. This discovery indicates that the frequency of planets is the same for stars inside and outside of open clusters.  This means that planets can form and survive in these clusters despite the dense stellar environment and high radiation from nearby supernovae.

Open Clusters
Most stars and planets form in open clusters; over time, the clusters drift apart and the stars are left in isolation. These stars, like the sun, are known as field stars. 95% of open clusters fall apart in 108 years after formation. Open clusters that survive longer than this must be much denser than the average cluster.

Such is the case with NGC6811, a 1 billion year-old cluster about 1 kpc away. To survive for so long, its initial density must have been extremely high, approximately 13,000 stars per cubic parsec, 2 orders of magnitude greater than a typical cluster. This dense environment would have been much different than the birthplace of a typical field star. It is not well understood how that dense enviroment would affect planet formation. Stellar outflows and winds, close encounters, and violent and highly radiative nearby supernovae could all have negative impacts on planet formation. To test this, we need to know if the frequency of planets is the same inside and outside of clusters. 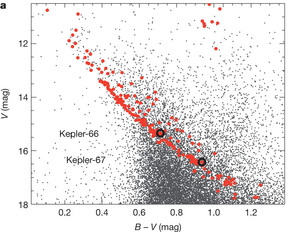 Figure 2 – Color-magnitude diagram of all the stars within a 1-degree field around NGC6811. The red dots trace the cluster members, who lie along a well defined color-magnitude relation. The two planet hosting stars are marked with the black circles.

So far, planet surveys of clusters had low sensitivity and insufficient sample sizes. Over 800 planets have been found around field stars, but only four planets have been found in clusters. Those four are also hot Jupiters, massive planets that are the easiest to detect. Until now, no limit has been placed on the occurrence of mini-Neptune sized planets (2-4 Earth radii), the most commonly found planet size amongst field stars.

The Kepler Cluster Study
The Kepler cluster study is a program to identify members of clusters in the Kepler field and search for transiting planets around the member stars. One of the clusters studied is the 1 bilion year old NGC6811, in which the team studied 377 stars. Because the stars in the cluster are co-evolving, shared parameters such as age, distance, and chemical composition are well determined, allowing for accurate determination of individual characteristics such as masses, radii, and temperatures.

The study uncovered two transiting mini-Neptunes in NGC6811, Kepler 66b and Kepler 67b. The planets have radii of 2.8 and 2.9 Earth radii and orbital periods of 17.8 and 15.7 days, respectively. At 1 kpc, the stars are far too distant to follow up with radial velocity measurements to confirm the planets. Instead, Meibom et al. performed rigorous statistical tests to determine that the probability of a false positive is far less than 1%.

The occurrence rate of planets in clusters
The real question is whether these two mini-Neptunes are consistent with the rate of planet occurrences in field stars. To determine this, Meibom et al. ran a Monte Carlo experiment using the known stellar properties of the cluster stars. They simulated planets with a distribution of sizes and orbital periods equal to that of Kepler planets and planet candidates while taking into account the rate of false positives and incompleteness in the Kepler sample.

They ran the simulations 1000 times and retained only the detectable planets. In the end, they predicted the number of transiting planets they would expect to see, 4±2 planets, consistent with the observations of 2 planets. Additionally, Figure 3 shows that Kepler 66b and Kepler 67b have radii and orbital periods similar to the most commonly expected planets around field stars.

The frequency and the properties of planets around cluster stars is no different than planets around field stars. This implies that the planet formation process can withstand the extreme environments of dense clusters. 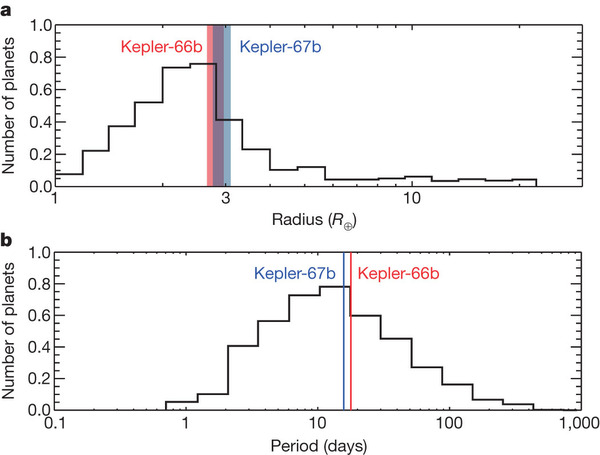 Figure 3 – The radii and orbital periods of Kepler 66b and Kepler 67b compared with the distributions of simulated transiting planets in NGC6811. The properties of the two planets are similar to the most commonly expected planets.