This is a crosspost from our Spanish-language sister site Astrobitos, from an original post by Elena González Egea

Title: A giant impact as the likely origin of different twins in the Kepler-107 exoplanet system

In the search for exoplanets, we’re discovering an increasing number of planetary systems around distant stars that are very different from our own Solar System: Jupiter-mass planets so close to their star that they reach temperatures over 2000 Kelvin, circumbinary planets which, like Luke Skywalker’s home Tatooine, have two suns, or systems with giant planets larger than Jupiter at incredible distances from their central star. This study focuses on one of these unusual systems, for the first time finding evidence that an interplanetary collision took place while the system was still forming. This is Kepler-107.

Kepler-107 lies roughly 525 parsecs from us, and consists of a solar-type central star and four planets, named Kepler-107b, Kepler-107c, Kepler-107d and (you guessed it)  Kepler-107e. The planets orbit very close to their star: all within the radius of Mercury from the Sun, the farthest at 0.13 astronomical units (AU), and the closest at only 0.045 AU — taking only a little over three days to complete an orbit. All four planets are smaller than Neptune, and form a resonant system: dividing their orbital periods results in ratios of integers — for example, dividing Kepler-107c’s orbit by that of Kepler-107b gives us 1.541, which is close to the result of dividing 3 by 2 (resonance ~ 3:2). Resonances found in this and other planetary systems indicate that these planets probably formed further away from their star and migrated inwards. In addition, the two innermost planets have very low eccentricities: that is, their orbits are very close to circular.

As its name suggests, Kepler-107 was discovered by the Kepler mission, which (until recently) undertook the search for exoplanets using the transit method. Using this method, the radius of the planet can be measured, since there is a dependence on the drop in brightness of the star: the larger the planet, the more light it blocks as it transits. However, to know a planet’s mass, another complementary technique is required: here the radial velocity method is used, detecting the “wobble” caused by the gravitational force of the planet on the star by measuring the Doppler shift of its spectral lines. The authors made new observations of this star with the high-resolution HARPS-N spectrograph, on the Galileo Nazionale Telescope in La Palma. 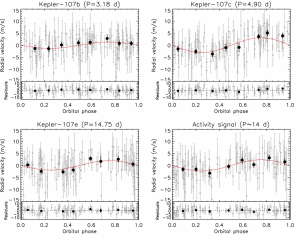 Figure 1: Radial velocity measurements of Kepler-107 with HARPS-N. Individual data points are shown in grey, and averaged data in black. The radial velocity measurement is shown as a function of the orbital phase for each planet (with the exception of Kepler-107d that showed no variation): Kepler-107b in the upper left panel, Kepler-107c in the upper right and Kepler-107e in the lower left. In each panel the residuals are also shown after subtracting the adjusted Keplerian model (red line). Figure 1 in the paper.

Figure 1 shows the radial velocity signal for each planet in the system. From the amplitude of the signal, the minimum mass of each planet can be calculated. This is the “minimum” mass, because in order to work out the total mass you need to know the inclination angle of the planet as well — but since the inclination is already known from the transits, it is also possible in this case to determine the total mass. They calculate that planet b has a mass of about 3.5 Earth masses, and planet c of about 9.39 Earth masses, despite having very similar radii. Thus the two planets have vastly different densities: 5.3 g cm-3 for planet b, and 12.65 g cm-3 for planet c. In a mass-radius diagram like the one in figure 2 we see that both planets would be rocky, but Kepler-107c must have a high percentage of iron in its composition (around 70%), at least twice as much as Kepler- 107b. 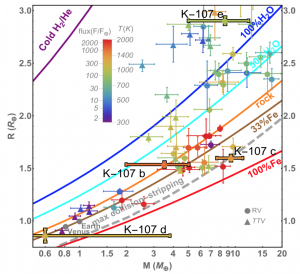 Figure 2: Mass-radius diagram of exoplanets smaller than 3 terrestrial radii and with measured densities with an accuracy greater than 33% . Circles denote densities measured from radial velocities, and triangles those measured from transit timing variations (TTV). Colours represent the equilibrium temperature of the planet, and the continuous lines are theoretical curves for planets of different compositions. The dashed gray line represents the minimum radius predicted by collision models as a function of the planetary mass. We see the difference in composition for the rocky planets b and c, the second being on this minimum radius line. Planet e would be a mini-Neptune with a significant fraction of volatiles (H/He and/or water), while planet d appears to be also of the rocky type. Figure 2 in the paper.

However, while planet c has an uncertainty in the estimated mass of only 19%, that of planet b is 43%, since the signal is weaker and the measurement is therefore noisier (see upper left panel of Fig. 1). Even so, the authors calculated that the mass of planet b must be considerably smaller than that of planet c, otherwise its signal would have been detected more clearly in the radial velocity measurements.

Characterizing the star with star-quakes

Using asteroseismology, the authors measured star-quakes to precisely determine stellar parameters such as mass, radius, density, gravity and age. As they say, “Know thy star, know thy planet”: that is, the better a star is characterized, the better its planets can be characterized. The authors established via asteroseismology that the star (and therefore the planetary system) is 4.29 billion years old, very similar to our middle-aged Sun. Using this age, they were able to better measure the radii of the planets and, therefore, their density.

The unusually high density of planet c is likely due to some event that destroyed the outer shell of silicates, leaving only the compact iron core and a thin mantle, as in the case of the planet Mercury. One possible explanation is that the high X-ray and ultraviolet radiation of the star at its birth blew out the atmosphere and the crust of the planet. This would be possible given how close it is to the star, but if so, the same would have happened with planet b, which is even closer — but planet b has a much lower density. Could it be that Kepler-107c formed closer to the star and migrated outward? The authors conclude this is unlikely, since this would have destabilized the system and the orbits would not be so circular.

The explanation that seems most likely is that a large interplanetary collision ripped off the crust and part of the mantle of Kepler-107c. This had to occur shortly after the formation of the star, since to reach their current resonant configuration the planets must have been in place for a considerable length of time. Using hydrodynamic simulations, the authors saw that a frontal impact between two planets around 10 Earth masses matches the density measured for planet c, although they also saw that multiple collisions with small bodies would give a similar result.

It’s likely that interplanetary crashes have occurred in our Solar System — not only in the case of Mercury’s dense core, but the origin of the Earth-Moon system and the fact that Uranus’s axis of rotation is tilted relative to the other planets can also be explained by collisions. We are now beginning to discover that these impacts may also be common in other planetary systems.