The Sloan Digital Sky Survey (SDSS), an observing program taking imaging and spectroscopic data of over 35% of the sky, has imaged over a million galaxies since it began in 2000. This huge sample size provides great opportunities for statistical analyses of galaxy populations. For example, by calculating the frequency of spiral galaxies vs. elliptical galaxies, we can better understand how galaxies evolve. But how do we analyze such a huge dataset? Even just classifying a galaxy as spiral or elliptical is difficult. Computer image analysis isn’t as accurate as visual inspection by a human, but it would take too long for a handful of grad students to sort the images.

The Galaxy Zoo project was created to address this problem using the massive amount of manpower available on the Internet. (See our guest post by Galaxy Zoo co-founder Kevin Schawinski for more information.) Starting in 2007, they asked for volunteers to sort galaxy images as either elliptical, spiral, or mergers. Eventually 250,000 of these citizen scientists produced classifications of ~ 1 million galaxies. Each galaxy was analyzed by multiple volunteers to improve the accuracy of the classifications. Since then, dozens of papers have been written using the original Galaxy Zoo 1 results, including a few that we’ve covered here on astrobites.

Starting in 2009, Galaxy Zoo was updated to include more detailed classifications on the 300,000 brightest galaxies in the Galaxy Zoo 1 sample. The citizen scientists in Galaxy Zoo 2 were asked to look at galaxy characteristics like the presence of a bar and the tightness of the arms in spiral galaxies, and the roundness of ellipticals.  Fig. 1 shows the flowchart followed by a citizen scientist for classifying an image in Galaxy Zoo 2. This paper presents the results of over 300,000 of these newer, more detailed classifications. 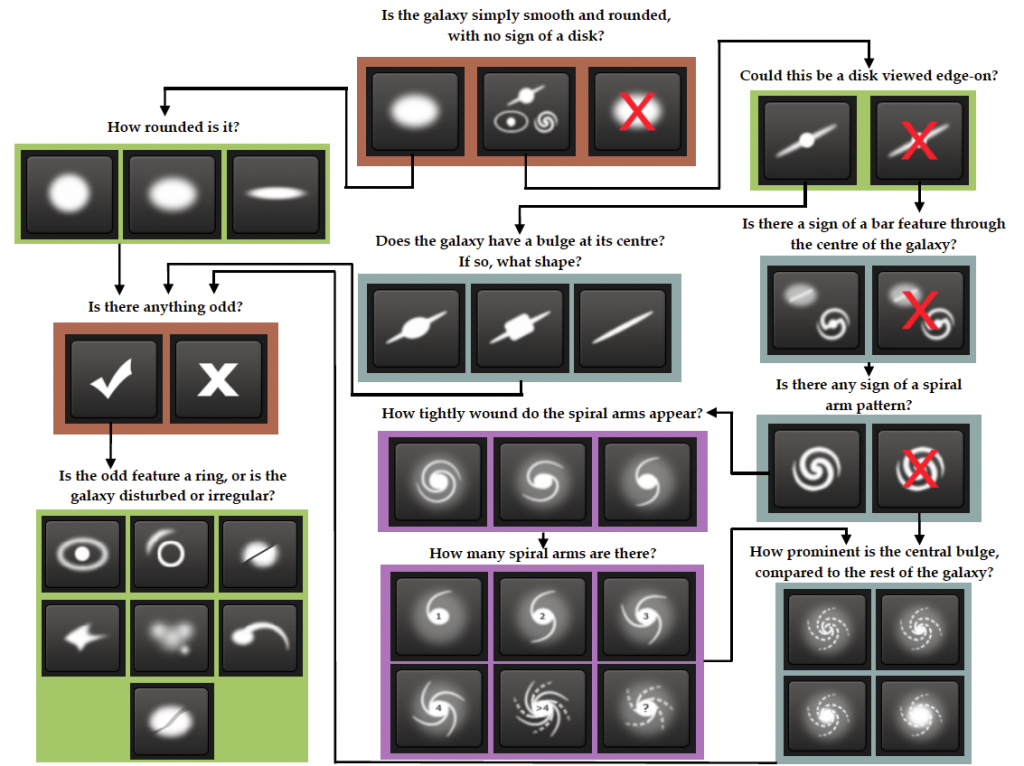 Each citizen scientists’ votes are weighted by how consistent their classifications are with the majority. The authors of this paper also corrected for various classification biases. For example, fine-detail structures like bars and spiral arms are harder to identify in galaxies at higher redshift (which are dimmer and smaller in the images), so this redshift bias must be corrected in the final results.  Fig. 2 shows the fraction of votes vs. redshift for each response in Fig 1. Note that the vote fractions before the redshift bias correction (solid lines) show a decrease in fine features at high redshift compared with the vote fractions after the redshift bias correction (dashed lines). This can be seen particularly in the plots for “Smooth or features”, “Bar”, and “Spiral structure.” 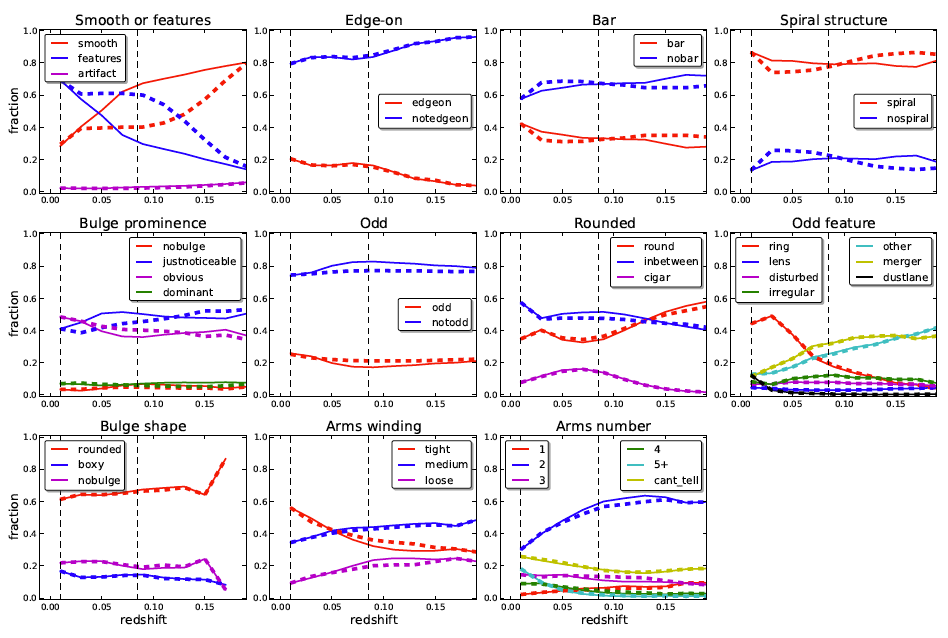 The Galaxy Zoo 2 classification catalogue is now available to the public. You can check it out at http://data.galaxyzoo.org/. If you want to try your hand at classifying galaxies, go to the Galaxy Zoo site at http://www.galaxyzoo.org/. Or take a look at our Citizen Science glossary page, which lists lots of astronomy citizen science projects for you to explore.