Our present understanding of the matter in the universe is that about 85% of it is “dark”: it doesn’t absorb or emit light. This dark matter can still exert a gravitational pull, however, which is how it was detected in the first place: all of the best evidence for the existence of dark matter comes from its gravitational influence, whether that’s seen in the rotation of stars within galaxies, the orbits of galaxies within galaxy clusters, or gravitational lensing caused by massive clumps of dark matter. 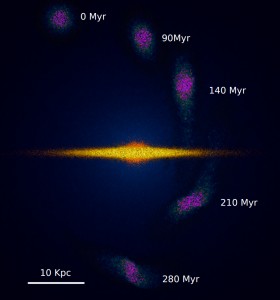 This diagram shows the simulation set up: the disk of a galaxy similar to the Milky Way is sitting at the bottom of a massive dark matter halo, and a smaller clump (shown in purple) passes through it over a period of 280 million years. (From Figure 1 in the text.)

The current most widely-accepted models of cosmology predict that dark matter is just a new sort of particle we haven’t yet observed in our laboratory experiments. These models describe the creation of vast amounts of dark matter in the early universe, which clumped together to form “dark matter halos”, large, gravitationally-bound clouds. These halos eventually pulled in surrounding gas and stars to form the familiar clumps of matter we know today: galaxies and galaxy clusters. Galaxies such as our own Milky Way live in these massive conglomerations of dark matter, and so we can get an idea of how the dark matter has clumped together since the big bang because the “ordinary” matter (gas and stars) roughly traces the dark matter distribution.

However, the same models also predict that a large number of smaller dark matter halos should have formed which never became massive enough to pull in stars and gas. Finding these halos is difficult because we should only be able to detect them through their gravitational pull, but finding them is an important test of our current understanding of cosmology.

If one of these starless clumps of dark matter crashed into the Milky Way, it might leave a trace by disturbing the orbit of stars in our galaxy. The authors of this paper simulated such a scenario to see how feasible it might be to use this to detect these small dark matter halos. Their set-up is shown in Figure 1: a satellite halo crashes into the disk of a Milky-Way sized galaxy. 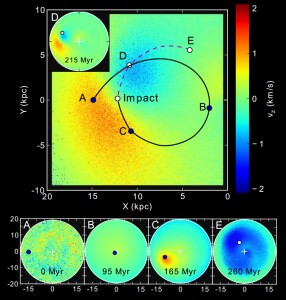 This figure shows the effect of the passage of the dark matter clump (from Figure 2 in the text).

Figure 2 in the paper shows the results of such an impact. It’s set up so that we are looking down at the disk of stars in the simulated galaxy, and it shows snapshots at 0, 95, 165, and 260 million years. The path of the dark matter clump is shown as a line, starting from A and moving to E, with the impact happening at the place indicated in the picture.

The colors in this diagram show us the relative velocity of the stars in the disk: red stars are moving away from us, and blue stars are moving toward us. You can see how the stars sort of ripple out from the point of impact, and a disturbance in their orbit is still clear even 75 million years after the impact.

This model means that we might be able to detect the passage of such objects if we can get precise enough measurements of the orbits of stars in the Milky Way. The authors suggest that this will be possible with the upcoming Gaia telescope, which will measure stars’ positions and velocities more accurately than ever before.