We are used to thinking about planet transits, the dimming of a star when a planet passes in front of it, in visible wavelengths. The Kepler mission, the most prolific in terms of exoplanet candidates and whose fate is described in this astrobite, looks at stars with eyes sensitive to the visible part of the electromagnetic spectrum. Are there lessons to be learned from looking at planet transits in other wavelengths? The authors of this paper focus on understanding what we can learn about stars by observing transiting planets in the radio band, with the ALMA interferometer in mind. (If you want to know more about ALMA and radio interferometry, you can take a look at this astrobite.) 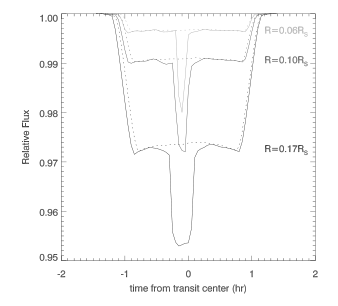 The light-curve of a star with a very active region as a planet transits. The prominent dip in the center corresponds to the planet occulting the active region of the star. The small dips when the planet enters and leaves the transit are due to limb brightening in the chromosphere. Fig 3b from Selhorst et al.

A star looks quite different in the radio. First, it looks brighter along its rim than in visible wavelengths, a phenomenon known as limb brightening (as opposed to limb darkening in the visible). A useful (though hardly exact) analogy is to think about decreased visibility in a foggy day: there is a distance up to which you can see the traffic in front of you. Likewise, when we look through the surface of a star, there is a distance above which we do not have any information. (This is usually quantified by the concept of optical depth.) When we look at the star in the radio along the limb, we are effectively seeing the transition between the stellar chromosphere and the corona. There, the temperature of the star increases inside-out, probably due to magnetic activity (but the problem remains unsolved and you can read more about it here).

Second, when a star has a spot, that region is dimmer than average in the visible, such that when a planet covers it, the total luminosity from the combined star and planet system increases. In the radio, spots are actually brighter than the average surface of the star. One reason is that the magnetic field traps charged particles and enhances free-free emission: the emission of radiation due to the acceleration of a charged particle being deflected by another particle, but other magnetic mechanisms can also boost the emission (gyro-resonance is one example).  Thus, when a planet occludes a spot, it will decrease the stellar flux more than if it were occluding a quiet region in the star.

The authors simulate the transit of planets of different sizes around stars with varying degrees of magnetic activity. To simulate the stars, they use maps of the Sun observed in 17 GHz taken by the Nobeyama Radioheliograph at different moments in the solar cycle. The figure to the right shows an example of a planet transiting over a very active star. The effect of limb brightening can easily be seen for the largest planet size. It appears as a more prominent decrease in the flux as the planet begins to occlude the star and as it exits from the transit. Similarly, because active regions are brighter than the average surface of the star in the radio, planets transiting over these regions will decrease the observed flux even more than if the star were quiet. This corresponds to the prominent peak at t~0 above. In the plot below, the authors show the maximum reduction of the intensity of stars with different degrees of activity as planets of different sizes transit across them. 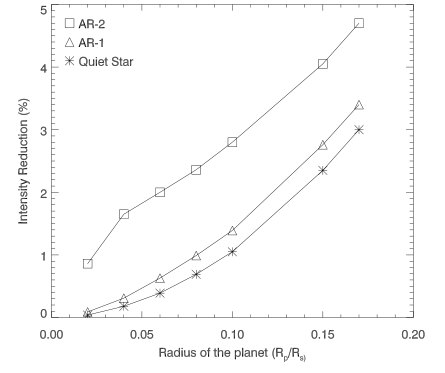 The maximum decrease in intensity due to planets of different sizes occulting stars of varying degrees of activity (the stars correspond to a quiet star and the squares, to a star with strong activity). Figure 4 from Selhorst et al.

The authors estimate that the transit of a close-in Jupiter-size planet across a star like the Sun could be detected by ALMA if it were observed during 1h under optimal conditions. Fortunately, most stars are more active (with more and larger spots) than the Sun and many of them have multiple planets around them, which helps when it comes to detecting a radio transit. If these transits were to be observed by ALMA in a range of wavelengths in the radio, it would be possible to build a model of the gradient of temperature across the stellar atmosphere and to estimate the magnetic activity. Simultaneously observing the transit in the visible can help confirm whether a the radio transit light-curve is truly due to a stellar spot.