Giant space lasers have been a staple of science fiction ever since a special-effects crew figured out how to make a glowing line blow up Alderaan. But while we don’t yet have orbital ion cannons (that we know of), the astronomical truth is, as usual, far more interesting. This paper reports on a search for new extragalactic water masers with the Green Bank Telescope and reports on the discovery of four sources in 37 objects searched. 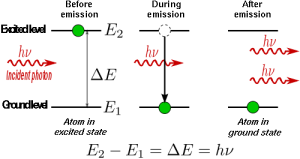 Stimulated emission, the triggering process that amplifies light in a laser or maser. (Credit: Wikipedia)

The basic principle of a laser is simple: some material, called the gain material, is energetically pumped to cause a population inversion where most of the electrons are in an excited state, i.e. the opposite or “inverse” of the usual situation where most are in the ground state. Once the population is sufficiently inverted, the laser is triggered by the injection of photons at the transition wavelength between the excited and ground state. From here the process of stimulated emission takes over, as shown to the left; in brief, the presence of a photon at the transition wavelength makes it far more likely that an electron will undergo that transition and emit another photon. In the population-inverted gain material, this causes a chain reaction as the electrons are all triggered to drop from excited to ground together, emitting a synchronized burst of monochromatic radiation. This is the basic principle behind taunting cats with elusive red dots.

It turns out this lasing phenomenon can also occur in an astronomical setting. Giant clouds of molecules in space, particularly hydroxyl (OH) and water, provide the gain material. They can be radiatively or collisionally pumped into population inversion, often by the emitted light of either young stars or active galactic nuclei (AGN), and then triggered to lase. Because these clouds produce microwave rather than optical emission, they are masers rather than lasers. Astrophysical masers can range in size and strength from pockets of gas in our own Milky Way to the gigamaser galaxy TXS 2226-184, whose central nucleus supports a population of masers pumped to the tune of 6100 suns’ worth of isotropic radiation (maser radiation is probably focused into a cone, but we’re not sure by how much, so we quote its luminosity in terms of how bright it would be if it radiated equally in all directions). Extragalactic sources are named for how much brighter they are than standard Milky Way masers; the term “kilomaser” generally refers to one with an isotropic luminosity < 10 L⊙ and “megamaser” to one with an isotropic luminosity > 10 L⊙.

Besides sounding really impressive, astrophysical masers allow lots of useful measurements to be taken. They can tell us about the presence of various molecular species in otherwise complex environments and their narrow line widths allow precise velocity measurements. Since some of the most powerful extragalactic masers occur in the accretion disks at the center of galaxies, tracking their orbital motion allows estimates of both the mass of the central supermassive black holes, via parallax, the distance to the galaxy (and therefore estimates of cosmological parameters) independent of any other standard candle. 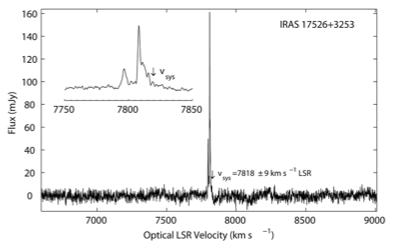 Spectrum of one of the 4 new water megamasers, IRAS 17526+3253 (UGC 11035). Collisionally-pumped water clouds in this galaxy are emitting large quantities of microwave radiation at 22 GHz. This galaxy may also host OH masers. Credit: Wagner 2013.

The author of this paper used the NRAO’s Green Bank radio telescope to search 37 candidate galaxies, selected to have similar properties to known maser hosts, for emission at 22 GHz, a strong microwave transition in water molecules. The object of the search was both to locate new and interesting water masers and to see how many coincided with already-known OH masers – at least five objects have been observed to mase in both. Out of the 37 objects searched, 4 new extragalactic water megamasers were found. Interestingly, two of these detections were in galaxies that were already known to host OH masers, bringing the total number showing both to 7 (possibly 8). Given completely separate origin mechanisms for OH and water masers, statistical arguments suggest that the number of detections in both species given the number of galaxies searched should be significantly lower. A much larger sample size is required to state the case definitively, however, since at this point only 95 galaxies have been searched for both species.