Getting distances from stars that touch

Astronomers are always looking for new ways to measure distance. We already have a number of ways to figure out how far away various astronomical objects are, including parallax, eclipsing binaries, masers, supernovae Ia, variable stars, the Tully-Fisher and Faber-Jackson relations, just to name a few. Finding new methods, however, allows us to not only verify and improve on our previous measurements but also to get measurements of distance where it was previously impossible. Many of our distance indicators only apply under special conditions. It is difficult to get accurate geometric distances from a megamaser, for example, if the host galaxy’s orientation is not edge-on. Parallax, on the other hand, can only be used on the nearest objects (usually objects in our galaxy, out to about the Galactic center). Cepheids are young stars and are only found in galaxies with active star formation. Together, these distance measures can be put together into a cosmic distance ladder to get distances to astronomical objects at a range of distances.

Figure 1: An artist’s rendition of the hottest and most massive contact binary. From: By ESO/L. Calçada – http://www.eso.org/public/images/eso1540a/

The authors of today’s astrobite take a look at using contact binaries as distance indicators. Contact binaries (CBs) are binary systems where the two stars are so close that they are actually touching, causing them to share a convective envelope. Figure 1 shows an artist’s rendition of a particularly famous CB,VFTS 352. As weird as they sound, they are actually pretty common–about 0.2% of the stars near us are contact binaries–making them three times as numerous as Cepheids, a variable star commonly-used as a  distance indicator. They are also approximately seven magnitudes fainter than Cepheids, but unlike Cepheids, which can only be found in young populations, CBs can be found in a wide range of older populations. Astronomers have tried using contact binaries as distance indicators before, but previous attempts to relate a CB’s period with its luminosity (known as a period-luminosity relation or PL relation) have used a small number of objects and contained large uncertainties.

So how do we actually get distances from these systems? The brightness of a CB changes periodically as one component eclipses another. These periods are related to the sizes of the objects in the system. Since periods are not affected by distance, this is something we can measure accurately. In addition, both members of a contact binary have the same temperature despite having different masses because of their shared convective envelope. The temperature (color) and period of a CB can then be used to derive its luminosity. Like variable stars, these stars should also follow a PL relation. When that is compared that with the apparent magnitude we can find the distance to a CB. In order to calibrate these relations, however, independent distance determinations are necessary. The resulting relations can them be used to find distances out to other contact binaries.

The authors use 20 W UMa-type CBs with Hipparcos parallaxes, 4 moving-group CBs, and 42 open cluster CBs. The moving-group CBs had well-determined distances, and CBs in open clusters were assigned the same distances as their clusters. They were able to create this sample by taking their starting set of 6090 CBs and applying three selection criteria to ensure that they CBs were actually members of the open clusters they were associated with (rather than foreground or background stars). The contact binaries were required to be within the core radius of the host, have proper motion in agreement with their host cluster, and age comparable to the age of the open cluster. 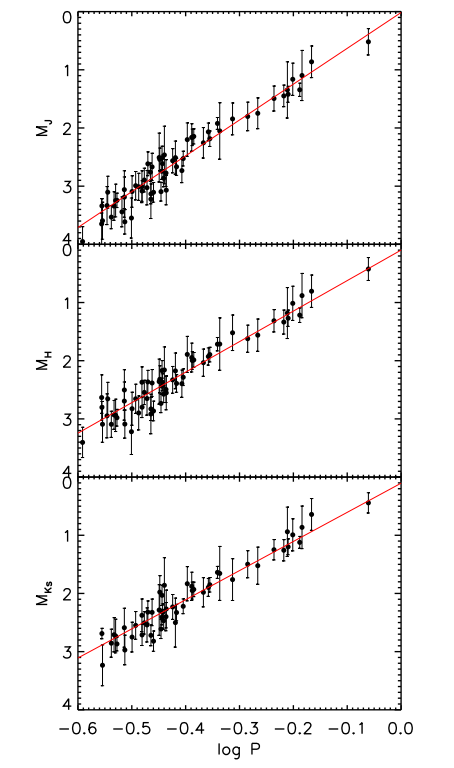 Figure 2: This shows the three near-infrared period-luminosity relations obtained for the 66 calibrating contact binaries used in the paper. The horizontal axis denotes the log of the period (in days) and the vertical axis is the absolute magnitude in the J, H, and Ks bands. The PL relation is the red line that has been fit through all of the objects in their sample.

Unlike variable stars, which exhibit different light curve shapes in different bands (this is caused by the temperature changes in the star at different points of its pulsation cycle), the light curve shape of a CB is very similar in different bands. This makes it easier to get magnitudes from one band and using light curves in another band, allowing them to obtain PL relations in J, H, and Ks, using established V-band light curves. The resulting relations have only a 0.08 magnitude scatter in H and Ks and 0.09 magnitude scatter in J, making them comparable with those of Cepheids, a commonly-used distance indicator. The relations are shown in Figure 2. They also calculate the PLC relations for contact binaries, and compare them with their PL relations and find that they are in good agreement with each other. These PL relations exhibit a shallower slope than an earlier PL relation from the literature, but the authors attribute this difference to the number of objects used in the previous paper (21, compared to 66 in the current paper). The slope of the previous relation was also more dependent on the shortest-period CB, and when the authors removed it from the sample, the results were in much better agreement with their own. Finally, the authors are also able to derive a distance modulus to the LMC in agreement with the literature value.

With the number of known contact binaries growing every year, they may prove to be a valuable distance indicator. The near-infrared (J, H, Ks) PL relations of CBs have comparable scatter to Cepheids. At the same time, because of their ages, they will be able to probe older features. CBs are also significantly fainter, but orders of magnitudes more common than Cepheids are. Ultimately, each new addition to the distance ladder bring us a little closer to understanding the physics of the Universe.