UR #10: Star Formation and Associations

As we’re now mid-way through the semester/quarter, many of you may have recently finished up REUs or summer research projects. We want to hear from you! Think you’re up to the challenge of describing your research carefully and clearly to a broad audience, in only one paragraph? Then send us a summary of it!

Sarah Blunt spent the summer before her freshman year doing research on young, close stellar kinematic associations in the astrophysics department of the American Museum of Natural History under Adric Riedel and Emily Rice. She plans to major in astrophysics and continue doing research at Brown. 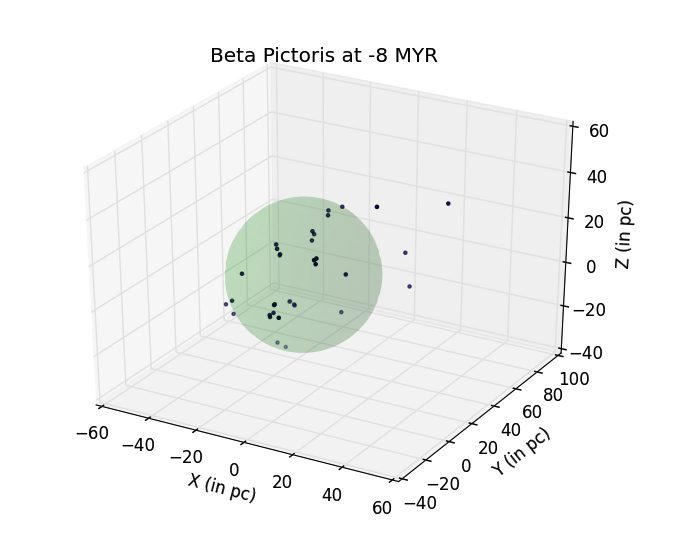 The 3-D positions of high probability members of the Beta Pictoris Association 8 million years ago, approximately the time of its formation. The green ellipsoid is a proxy for the volume of the association at this time, and stars far from the interior of this ellipsoid may need to be reconsidered as members.

Members of Young Kinematic Associations Near the Sun
In the late 1990s, the first co-moving associations of stars between ~8 and 50 million years old were identified within 70 pc of the Sun. Because location in the sky alone is not a reliable method of substantiating a star’s membership for a specific association, other methods must be employed. I compiled data from papers that produced lists of weak, probable, and definite members of the various associations, then used these candidates to trace the positions of stars to their common forming-regions by computing stellar positions at times in the past or future using current positions and space motions. If a star’s position at the time of the association’s formation appears farther from the forming-region than many of its companions, it may be eliminated as a member of the system. Producing lists of the definite members of these young, close associations is of particular importance because many stars in these associations have dusty debris disks and proto-planetary disks around them. Studying these disks may aid in our understanding of planetary formation and evolution. In addition, analyzing the paths of the high-mass stars in these systems may help us extrapolate probable locations for smaller, dimmer brown dwarf stars.

Diana is a senior at Harvard University concentrating in Astrophysics and Physics. She conducted her research on star formation and galaxy evolution during the summer of 2013, under the guidance of Dr. Kartik Sheth and Dr. Kim Scott at the National Radio Astronomy Observatory. Diana hopes to go to graduate school after she finishes her undergraduate degree.

The Influence of Bars in Triggering Star Formation Since z=1
Star formation has declined dramatically since z=1 while recent studies show a monotonic increase in the overall bar fraction during the same period of time. This is significant because bars have been shown to trigger star formation in the central regions of galaxies in the local Universe. We therefore decided to study the effect of an increased bar fraction on the overall star formation rate since z=1. To study this we calculated star formation rates in a redshift-dependent fraction of galactic bars over 0.2<z<0.84 in 295 IR-bright luminous spiral galaxies in the COSMOS field. We find that the star formation rate does not dramatically depend on the presence of a galactic bar at different redshifts. When we observe a sample of 1,495 galaxies unbiased galaxies we again see the same trend.

Therefore, our observations indicate that the presence of a bar does not have a measurable effect on boosting the overall star formation rate in the galaxy although it does have an effect on the location of star formation. We also found that when star formation in IR bright galaxies is compared to mass then there is a trend of increasing star formation with decreasing mass at low redshifts. 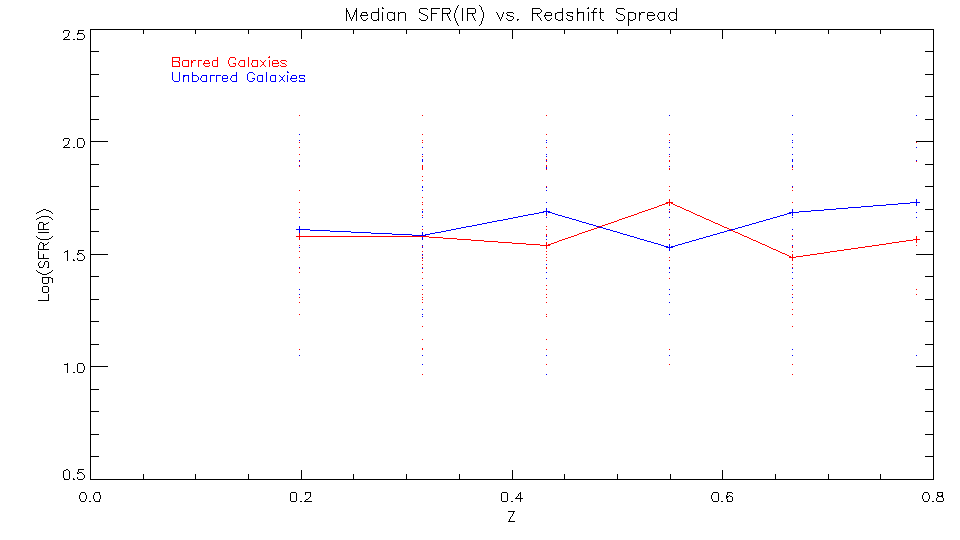 This figure shows the median SFRs for different redshift bins of 1 billion years with the spread plotted for each bin. You can see that this spread typically spans an order of magnitude from 10−100 solar masses/yr−1. Roughly speaking we do not see a trend for these galaxies and we especially do not see a trend between barred and unbarred galaxies.

UR #3: Star Clusters and Shock-Heated Gas