After more than 20 years of searching for exoplanets – an effort particularly aided in the last few years by Kepler – we have accumulated an impressive ensemble of planets orbiting other stars. Despite the relatively large number of detected exoplanets*, their compositions and formation mechanisms are still poorly understood. If a planet transits its host star (passes in front of it, blocking some of its light) we can measure its radius and, in some cases, we can also measure its mass with follow-up spectroscopy or transit timing variations. The smallish (~200) sample of exoplanets with both mass and radius measurements is extremely valuable for assessing planet composition and planet formation mechanisms. In this paper, theory and observations are combined in an attempt to assess the dependence of planet composition on observable planetary properties. Lopez and Fortney find that composition depends strongly on planetary radius, therefore knowledge of a planet’s radius alone allows one to make a statement about its composition. Based on this assertion the authors comment on the inferred planet composition distribution and its implications for planet formation theory.

The authors use evolutionary models to find the dependence of planet radius on four main parameters:  the total planet mass; the fraction of mass in the Hydrogen-Helium atmosphere, or ‘envelope’; the amount of sunlight, or ‘incident flux’ received from the host star; and the age of the planet. These models track the radii of planets with a range of rocky core masses, H/He envelope masses and incident fluxes as they cool and contract after formation. Additional heating in the core of the planet from radioactive decay which substantially lengthens cooling timescales is included in the models. The authors do not include photo-evaporation, asserting that its effect on the interior of a planet is negligible. A ‘hot start’ planet formation scenario is adopted – i.e. planets are assumed to form from collapsing, gravitationally unstable pockets of gas and dust, rather than from gradual build up of accreted material as in a ‘cold start’ scenario. The authors point out that the difference between these two scenarios is small after around 1 million years – the time at which their models begin. The results of these evolutionary models are shown in figure 1. 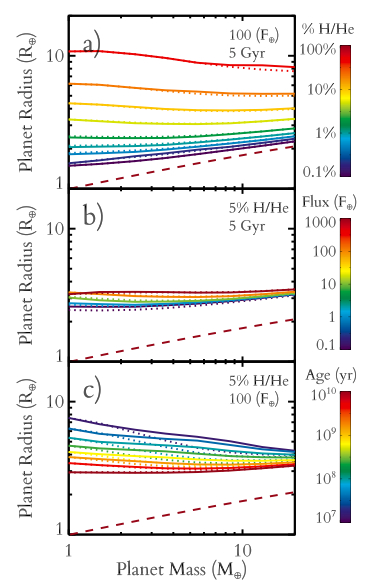 Figure 1: Planet radius as a function of mass for varying H/He fraction, flux and age. The three panels show the variation in mass-radius relation with each parameter whilst the other two parameters are held fixed. From the paper.

Panel a) of figure 1 shows the variation in radius with mass for a range of envelope fractions. The large separation between lines suggests that planet radius is a strong function of envelope fraction, at least for planets with radii greater than around 2 R⊕. Panels b) and c) demonstrate that radius is, by comparison, not a strong function of incident flux or age – the coloured lines are close together here. Based upon these results the authors suggest that planet radius depends, to first order, on the envelope fraction: radius can be used as a proxy for composition.

Lets look at the bottom panel more closely – it shows that planets contract as they cool down after forming. Radius changes fairly rapidly with mass for young planets; low mass planets are actually bigger than more massive planets at the same age. This is because low-mass planets have low surface gravities, so when young and still hot are very large. Low mass planets cool fast however and therefore contract fast, rapidly reaching the same radii as the more massive planets. So after 10 billion years these planets will have the same radius, regardless of mass.

Lopez and Fortney use their thermal evolution and structure models to calculate H/He envelope fractions for the ~200 exoplanets that have both radius and mass measurements. Figure 2 shows the tight relation between calculated composition and measured radii of these planets.

The authors recast the mass-radius relation as a mass-composition relation and plot composition vs mass for the same 200 planets in Figure 3. The relation between composition and mass reveals something about the way planets form. Below about 10 M⊕ only 5% of a planet’s mass resides in its envelope, so there is no strong dependence of envelope fraction on mass. At greater than 10 M⊕ however, planet cores can be massive enough to trigger runaway accretion during the formation process, gathering substantial envelopes. In this sub-Neptune to gas giant regime, the relation between composition and mass becomes significant. 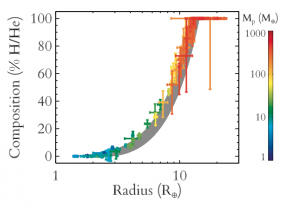 Figure 2: The composition-radius relation. A tight relation between calculated composition and measured radius is observed here. The grey shaded region shows the effect of varying the water abundance in the model. Planets are coloured according to mass.

When do planets form envelopes: super-Earth or Sub-Neptune?

What is the difference between a super-Earth and a sub-Neptune? Lopez and Fortney’s proposed definition is that sub-Neptunes have a substantial gaseous envelope, whereas super-Earths do not. But where does the boundary fall? At what planet radius can you be confident (inasmuch as you ever can be) that a planet has no envelope and at what radius can you be confident that it does?  The authors suggest that super-Earths cannot be larger than 2 R⊕ (after this point a planet would certainly accumulate a substantial envelope during formation) and, realistically, any planet between 1.75 – 2 R⊕ is likely to be a sub-Neptune. On the other side of the boundary, a planet with radius less than 1.5 R⊕ is unlikely to have a substantial H/He envelope – the surface gravity on such a planet would be too low to prevent photoevaporation. 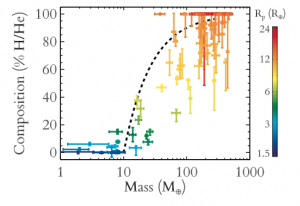 Figure 3: Composition vs mass. The black dashed line shows a toy model for planets with a core of 10 earth masses. Planets above 10 earth masses form large envelopes from runaway accretion. Planets are coloured according to radius.

How do the results tie in with planet formation theory?

The authors contextualise this work in terms of previous radius occurrence distribution studies such as those of Fressin et al (2013)  and Petigura et al (2013), who find a rapid decline in planets with radii greater than 3 R⊙. According to Lopez and Fortney, this is equivalent to finding few planets with substantial envelope fractions. Large envelopes are thought to be formed by the accretion of gas from the circumstellar disk when the planetary system is still very young. When stars reach the main sequence a stellar wind sweeps circumstellar gas and dust out of the planet-forming region, stunting the growth of gaseous envelopes. It is therefore hard to form planets with extremely large envelopes, so this result nicely agrees with planet formation theory. The work presented in this paper provides a new interpretation of planet radius that allows one to indirectly probe the composition distribution of exoplanets and has exciting implications for the field of planet formation theory.

* Visit exoplanets.org for a regularly updated count of all confirmed exoplanets.