Though the Kepler Telescope has now ceased its transit observations, there are still years worth of data to astronomers to sift through. New planets are being discovered constantly,  including, recently, an Earth-sized, rocky planet Kepler-78b. In this astrobite, we’ll cover the results of the two discovery papers on this target, published simultaneously in Nature.

The Kepler Telescope finds planets through the transit method. Kepler constantly monitors stars, waiting for the moment when a planet passes directly in front of one and blocks its light. Using this method, astronomers can determine a planet’s radius by measuring how much light is blocked, however the transit method alone tells us nothing about a planet’s mass.  The mass of an exoplanet is measured via the radial velocity (RV) method. This method measures how much the planet tugs on its star by using the doppler shift. This gives us M*sin(i), the product of the planet mass, M, and the sine of the inclination angle, i.  For a perfectly aligned transiting planet (i=90 degrees, sin(i) = 1), this gives a direct measure of the planet’s mass.

Combining the transit and the radial velocity methods to determine both the mass and radius of a planet is not an easy thing to do, especially for small planets that don’t produce a strong RV signal.  At 1.2 Earth Radii, Kepler-78b is the smallest planet to have both these measurements.

Kepler-78b’s Earth-like Density
Pepe et al. report all the details of the transit observations and the RV measurements. They report the radius to be 1.16 Earth Radii and the mass to be 1.86 Earth Masses. This gives a mean density of 5.57 g cm-3, remarkably similar to Earth’s density of 5.52 g cm-3. This implies that Kepler-78b is likely a rocky planet, probably very similar to the Earth with an iron core and a rocky mantle.

Howard et al. delve more deeply into the question of the planet’s composition. They developed a 2 component model of the composition – an iron core covered by a silicate mantle – which reproduces the mass and radii of the Earth and Venus quite well. Using this model, Howard et al. found Kepler-78b has an iron fraction of 20% ± 33%, similar to Earth and Venus. 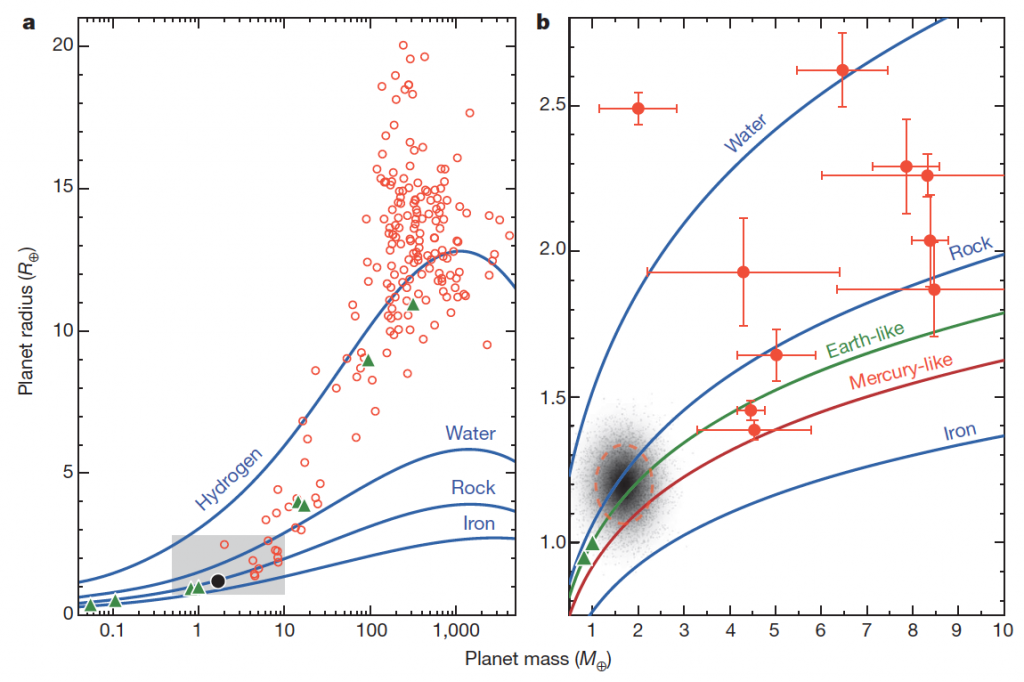 Figure 2 from Howard et al. – This figure shows the masses and radii of all exoplanets with measurements of both, along with several models of composition. Most large exoplanets fall into the hydrogen regime, close in density to Jupiter and Saturn. In the zoomed in panel b, we see the dark spot in the lower left hand corner showing the region likely occupied by Kepler-78b. It should have a rocky composition, very similar to Earth’s.

How “Earth-like” is Kepler-78b?
Kepler-78b is an important discovery because it is “Earth-like”: it is very similar to Earth in size, mass, and density. However, don’t start planning to move there just yet. Kepler-78b orbits just 0.01 astronomical units from its star (compared with 1 astronomical unit for the Earth-Sun distance). That means its dayside is a blistering 2300-3100 Kelvin and that in turn means that any atmosphere the planet had would have disappeared long ago.

But don’t be discouraged yet, this is still an important discovery. If Earth-sized planets exist close to their stars, then others probably also exist in more temperate regions. We found this planet first because close-in planets are easier to find, but that does not make it a representation of all exoplanets. Earth 2.0 is out there, we just need to keep searching.