Kepler-93b is a super-Earth measured with super-precision. It has a radius of 1.481 Earth radii, plus or minus Long Island.

Ballard et al. have an estimate of host star, Kepler 93’s radius, measured from spectroscopy. Spectroscopic measurements can be pretty imprecise, but this is where asteroseismology comes to the rescue. By combining spectroscopic and asteroseismic information about the stellar parameters, the uncertainty in the radius of planet Kepler 93b is reduced to 120 km. 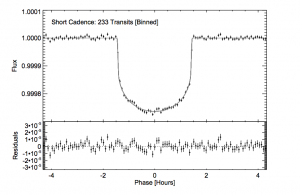 Figure 1. The transit light curve of Kepler 93b. This actually shows 233 transits of the planet, folded on the orbital period of the planet and binned, with the transit model superimposed as a black line. The bottom panel shows the residuals of the best fit model. The ‘short cadence’ observing mode is used for asteroseismic targets. The short, one minute exposures allow the detection of asteroseismic oscillations which have timescales of around 5 minutes.

All stars vibrate at a set of discrete frequencies. These frequencies are related to the sound speed within the star, and therefore tell you about its density. In stars that vibrate like the Sun such as Kepler 93, several overtones of the pressure oscillation modes are detectable in Kepler data. Pressure oscillations are produced by internal pressure fluctuations that cause the star to periodically expand and contract. As the star expands it gets a little cooler and dimmer and when it contracts it gets hotter and brighter, so the star’s luminosity varies periodically. This periodic signal shows up in Kepler light curves – a Fourier transform of Kepler 93’s light curve reveals the frequencies of its oscillation modes – see figure 2.

The parameters of the Kepler-93 system that can be inferred from the light curve, planet to star radius ratio and stellar density included, are explored using MCMC. Ballard et al. use what they know about the stellar density from asteroseismology to place priors over the observable properties of the star and planet system. This means that the posterior probability distributions of those parameters are more tightly constrained and their associated uncertainties are reduced. See this astrobite about probabilistic inference to learn more about prior and posterior probability distributions.

False positives often crop up in Kepler data: small stars can produce similar signals to those of planets, plus planets or stars orbiting background stars can contaminate light curves. Kepler planets are only confirmed if their masses are measured to be planetary (

13 Jupiter masses), or if it is extremely unlikely that the signal could be caused by anything but a planet transiting the target star. Radial velocity data for this planetary system confirms the object’s mass to be a super-Earth-like 3.8 ± 1.5 Earth masses, and the authors of this paper provide further evidence that this cannot be anything but a planet orbiting Kepler 93. 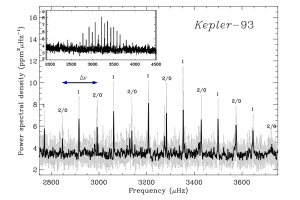 , is the separation between adjacent l=0 modes. The black and grey curves show the results of two different smoothing filters applied to the light curve before the power spectrum was calculated.

Asteroseismology gives you stellar density. Planet transits also allow you to measure the densities of stars. Through some nice mathematical cancellation it turns out that the duration of the planet transit is directly related to the density of the star! Ballard et al. show that the asteroseismic density of Kepler 93 is consistent with the density measured from the transit light curve. It would be very difficult to get two such consistent results if the transiting object were anything but a planet orbiting Kepler 93. The authors therefore conclude that Kepler 93b must be a planet.

Don’t be fooled by the fact that the Kepler spacecraft has seen better days. In the four years of its fully operational life it produced the most precise measurements of exoplanets ever seen, and it will be many more years before its exquisite data set stops yielding new discoveries. At the same time as the publication of this paper the NASA senior review results were announced. Kepler’s repurposed mission, K2 was to be commissioned, but there was no happy ending for Spitzer – an infrared telescope which has made wonderful contributions to astronomy and exoplanets. See this astrobite for more on Spitzer’s uncertain future. In this paper, Ballard et al. observe four transits of Kepler 93b with Spitzer, measuring a radius that is consistent with that measured from Kepler data and demonstrating that Spitzer is still capable of delivering fantastic science.