Astrobites is again liveblogging AAS! In order to avoid inundating our readers’ RSS feeds, we’ll be updating this post with short paragraphs about the talks we’ve heard and posters we’ve seen. So keep checking back throughout Monday afternoon!

As you may know, the Kepler team is proposing to use the Kepler spacecraft in an extended mission known as K2. The Kepler spacecraft now has only two working reaction wheels, but the Kepler team has figured out that they will be able to use the spacecraft to observe fields in the ecliptic plane.  These observations will last roughly 80 days and have been dubbed “campaigns.” The Kepler team is eager for feedback from the community about the exact placement of these fields along the ecliptic. Check out the list of proposed field positions on the Kepler website and share your comments with the team. The fun begins on March 1 with a roughly 80 day performance demonstration of 5000-10,000 targets in Gemini.

Kipping reported the discovery of a planetary system currently called KOI-314. The three planets in this system orbit a red dwarf star, a star smaller than the Sun. The outer two planets interact gravitationally and show transit timing variations (the same method used by Lithwick and his team). Their modeling of the transit timing variations allowed Kipping and his collaborators to determine the planets’ masses. Bizarrely, the two planets have the same radii (1.6 Earth radii) but different masses. One of them is a planet with a density about Earth’s, and a mass about 3 Earth masses. The other is less dense, with a mass about the same as Earth’s. Kipping and his team’s result shows that there’s not an exact radius where we can say, “this is the radius where the transition between rocky and gaseous planets.” Instead, the transition is somewhat blurry.

GJ 1214b is a planet larger than Earth that, like the planets in KOI-314, orbits a red dwarf star. There’s been a big debate over whether this planet has a cloudy atmosphere, or one dominated by heavy elements (e.g. water). Previous studies (such as this one, this one, and this one) as well as the work done by Kreidberg and collaborators, used a method called transmission spectroscopy, which looks at the depths of transits at different wavelengths. Kreidberg and her team were able to do this in unprecedented detail and found that the spectrum of GJ 1214b is very flat. If there were molecules in the planet’s atmosphere, even heavy ones, they would have seen the signatures of those molecules. Because of how flat the spectrum is, they conclude hat the planet’s atmosphere must contain clouds at high confidence.

Freeman’s lecture is on “galactic archaeology,” which is the the Milky Way’s formation is investigated through studies of galactic “fossils.” These fossils are the remnants of star clusters and, it’s thought, falling material, such as the galaxies that helped form our galaxy. A star doesn’t tell us its history or where it came from. Instead, we have to use other methods to infer its history. The two main pieces of information are its motion through the galaxy (its kinematics) and its chemical composition. First, kinematics: moving groups are groups of stars that, well, move together. Moving groups could have formed together out of the same interstellar cloud. They could be the result of galactic structures, such as resonances. They could also be the result of material falling into the Milky Way, such as a galaxy that’s been accreted. It’s this last thing that’s the Holy Grail for galactic archaeologists! The problem with kinematics, however, is that interactions with other stars in the galaxy can erase the kinematic signature of a star’s past. That’s why a star’s chemical composition is so important. The clusters in which stars form are very homogenous, and so stars that formed together are thought to have very similar compositions. The hope is that stars that have very different histories, such as stars that were accreted by the Milky Way, have chemical compositions that are distinct enough for us to track the different groups. Freeman told us about HERMES, an upcoming high resolution spectrograph that will observe stars with the goal of determining their chemical composition and exploiting them to learn about the history of the Milky Way. HERMES will be able to identify 30,000 different star formation sites in the disk by measuring >7 distinct chemical groups.

Stephenson uses ancient historical records to learn more about supernova events and the rotation rate of the Earth. Cultures like the ancient Babylonians became quite good at predicting lunar and solar eclipses, and took many records as a test of their predictions. By comparing our modern predictions of when historical eclipses should have occurred to when ancient civilizations recorded them happening, we can learn about how the rotation rate of the Earth has changed over the past roughly 2700 years.  Other cultures were more interested in what was unexpected in the sky. Supernova events in the Milky Way should be very bright–bright enough to be seen in the day. This means that even if ancient civilizations didn’t know what supernovae were, they were likely to record them happening anyway. The last supernova that exploded in our galaxy was recorded in 1604 AD, before telescopes were invented. Since supernova brightness decreases quickly after the event, it would be nice if we, as modern scientists, had some real-time records of these events. By looking for records of very bright, new “stars” that remained for a period of months and faded away, scientists know they’ve found records of supernova events. They can compare where on the sky ancient civilizations observed these events, and look for supernova remnants still visible today with telescopes, to get very accurate ages on currently-known remnants. 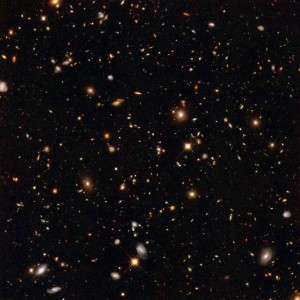