On to day two! Once again, Astrobites is liveblogging AAS! In order to avoid inundating our readers’ RSS feeds, we’ll be updating this post with short paragraphs about the talks we’ve heard and posters we’ve seen. So stay warm and keep checking back throughout Tuesday morning! 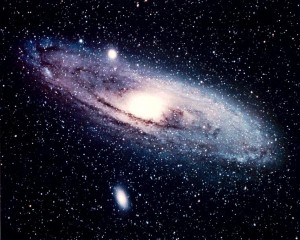 Does this galaxy have both a thin and thick disk? Read on to find out!

Galactic disks contain around 50% of optical light in nearby universe and most of the angular momentum. The properties of disks contain information about the merger/accretion history, star formation rate, dissipation rate, and internal processes such as heating of the disk. There are two main types of disks, called thin and thick. Thin disks are defined by having a ratio of the radial extent to the vertical extent of 10:1. Thick disks have a ratio of 3:1 and contain the oldest stars. In the Milky Way, the thick disk is composed of stars within a few kilo-parsecs of the Sun and most stars are ~10 Gyr old. The derived mass is ~15% of the Milky Way thin disk mass. The Milky Way thin disk shows an age-velocity dispersion relation. Older stars in the thin disk have a higher velocity dispersion. Stars are formed in cold gas with a low velocity dispersion. Gravitational interactions with molecular clouds and large, moving groups of stars can increase the velocity dispersion. So the older stars have had more of these interactions and thus have a higher velocity dispersion. High-resolution spectra of the thick and thin disks in the Milky Way show that the metallicities of both are distinct. This implies different formation scenarios for both.

Press conference
Bruce Macintosh (LLNL/Stanford) presented first light images from the Gemini Planet Imager, collected in November of 2013. This instrument is optimized for the detection and characterization of giant exoplanets. GPI is an integral field spectrograph, which means it can collect spectra of each planet it images, unlike the current (now previous?) generation of AO systems. The system is 8 times for sensitive than current AO systems too, meaning it can observe far more targets in one night than current systems. Their first data release is slated for this year.

Thane Currie (Toronto) presented images of ROXs 42Bb, an object he and collaborators found by looking through archival data from the Keck Observatory from 2005-2012. By analyzing a spectrum of the companion, Currie estimates the object has a mass nine times that of Jupiter. It’s also more than 100 AU from its host star, so how did it form? It’s too far away from its star to form by core accretion, the usual method of forming planets. Currie posits that the object is actually a failed star, forming by an instability like most stars and brown dwarfs.

Nick Cowan (Northwestern) explained some calculations he recently made of the geology of Super-Earths. Conventional wisdom suggests these giant worlds should be covered in water if they have the same composition as our planet, simply because the amount of water would be proportional to the volume of the planet (which goes as the cube of the planet radius) but the amount of surface area goes as the square of the radius. He claims this should not be an issue because much of the water will be trapped in the planet’s mantle, keeping it off the surface. Therefore, he predicts these large planets should have continents like our own, as long as they also have plate tectonics to trap and release water.

Aren Heinze (Stony Brook) presented results from the Weather on Other Worlds (WOW) survey, a Spitzer program to look for analogues to Jupiter’s Great Red Spot on nearby brown dwarfs. In 44 objects searched, his group found variability on 21 brown dwarfs! They claim this is the result of giant storms on the brown dwarfs. Imagine a Great Red Spot that covers half the surface of a Jupiter-sized planet! These storms probably have rain (of molten iron), and plausibly lightning. They also found some brown dwarfs rotate much more slowly than was previously expected.

Finally, Adam Burgasser (UC San Diego) announced a weather report on Luhman 16AB, a brown dwarf binary system only 6 light years away. His team observed the system for a week from four continents to observe the stars nearly continuously. They find the system varies not just photometrically, but also spectroscopically on timescales of a few hours. He proposes one of the stars (the B star) has patchy clouds, which they observe coming into and out of view. He suggested the star has approximately 40-60% of its surface covered by clouds.

Let that sink in for a second. We can measure how cloudy objects are when they are 6 light years away. Burgasser just called himself an Astrometeorologist. We are living in the future, and it is awesome. And partly cloudy.

First, dust is the raw material that planets form from, so the composition of the dust affects the formation process as well as the composition of the planets. More massive stars have more dust available for planet formation, so massive A stars are more likely to host planets than small M dwarfs, just because they have more planetary raw material sitting around. Dodson-Robinson’s research also indicates that more silicon-rich stars are also more likely to host planets, so silicon must be important for planet formation. She also found that the amount of oxygen in the star doesn’t seem to matter, which is weird considering that oxygen makes up a large percentage of a planet’s composition. But it turns out that in the planet formation process, oxygen is not the limiting reagent, but elements like silicon, iron, and magnesium are. Dodson-Robinson said that trying to form planets when you have a lot of oxygen but very little silicon is like “putting a lot of fertilizer on a pot that you haven’t put any seeds in.”

Her second main point was that dust is a thermal regulator in disks — it acts as an insulator, blocking thermal radiation. Changing the opacity of the dust in a disk (how much heat the dust blocks) affects the stability of the disk. An unstable disk could lead to gravitational instabilities, which can form giant planets. The composition of the dust can affect the opacity, so composition can affect the likelihood of forming giant planets by gravitational collapse. Lower-opacity disks can also form larger planets than higher-opacity disks.

Finally, dust is a “signpost” that we can use to understand where planets for in disks. Dodson-Robinson used the example of transitional disks, which have huge “holes” around the star. A single planet can’t clear out a gap that large, but Dodson-Robinson’s models show that multiple planets could be responsible. We see lots of material accreting onto the star from these disks, through the large central hole. Dodson-Robinson suggests that the material leapfrogs from planet to planet, traveling from the disk inwards towards the star. This material wouldn’t show up in radio observations, but we may see it in infrared observations.