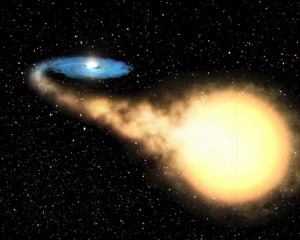 What do you call two stars hurtling around each other with bursts of X-rays every few decades? An X-ray transient, of course! This special flavor of X-ray binary features a neutron star or black hole together with a low-mass star. Because the star is so close to a dense object, it dumps mass into an accretion disk around its neighbor. Occasionally the disk deposits that mass onto the neutron star or black hole, which causes it to emit huge amounts of X-rays in a violent outburst.

Today’s paper by Shahbaz, Watson, and Dhillon takes a close look at the X-ray transient Cen X-4, which contains a neutron star and a main-sequence K-star. It has a mere 15.1-hour orbital period, and most recently experienced X-ray outbursts in 1969 and 1979. When Cen X-4’s neutron star isn’t throwing a stellar tantrum, we can observe the faint companion star. This isn’t any ordinary K-star—its shape is highly distorted by tidal forces from the neutron star tugging it into more of a teardrop shape than a sphere. And because it is moving so fast, individual absorption lines in the star’s spectrum are blurred by rotational broadening. 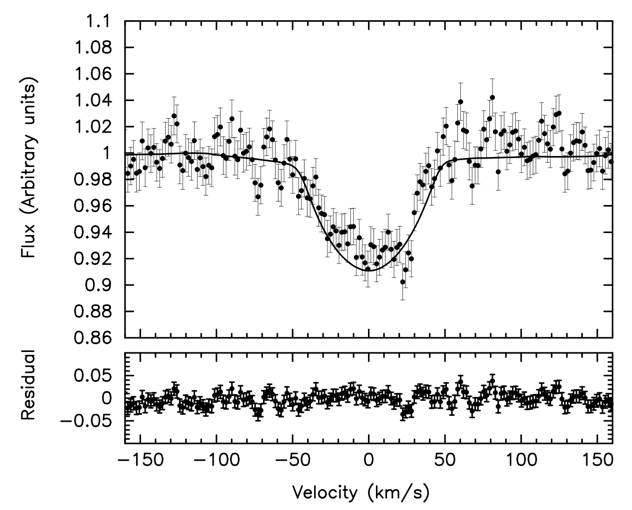 The average shape of broadened spectral lines in the K-star of X-ray transient Cen X-4 at phase 0. The points are observations at orbital phase 0, when the K-star appears in front of the neutron star from our perspective. The line is an initial fit with a standard technique that is less accurate than the detailed model the authors use to ultimately derive Cen X-4’s mass ratio.

A quest for mass

One important reason we study X-ray binaries is to measure the mass of neutron stars using Kepler’s Third Law. Neutron stars are so dense that we don’t fully understand what kind of physics goes on inside them. Theories abound, but building up a catalog of observed neutron star masses is a great constraint on what nature allows.

To measure the mass of the unseen neutron star in Cen X-4, the authors use spectra from the 8.2 m Very Large Telescope in Chile. They track the system throughout its 15.1-hour orbit and fit the spectra with a detailed model that accurately accounts for the K-star’s shape and rotational velocity. The figure to the left shows an “average” absorption line from the star’s spectrum for one particular geometric orientation. Their model yields a mass measurement roughly 10 times more accurate than previous estimates: the K-star is only 0.1755 times as massive as the neutron star. The final step is turning this mass ratio into individual component masses. The spectra conveniently provide a radial velocity curve for the K-star, and with this information the authors find a neutron star mass of

solar masses. This is a bit on the heavy side for neutron stars, which tend to be between 1-2 solar masses. 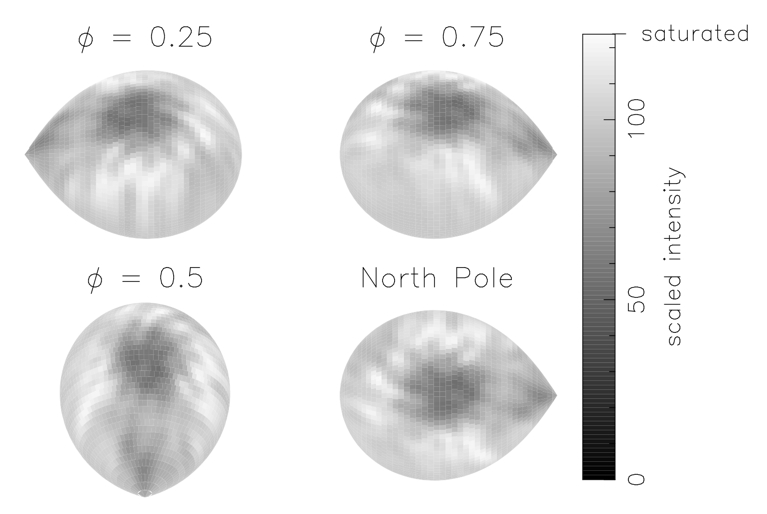 A spot on the north pole of the K-star in Cen X-4. Dark areas represent regions of lower absorption, and are interpreted as star spots. These images were produced using Roche tomography, a surface mapping technique for non-spherical stars. Three different geometric orientations of the star as seen from Earth are shown as orbital phases 0.25, 0.5, and 0.75. The final orientation is a top-down view.

A search for spots

The authors note that their model assumes uniform brightness of the K-star. However, cool dwarfs like this tend to have star spots. To check this, the authors use their phase-resolved spectral line profiles (like the one shown in the figure above) to create a surface map of the star using a technique similar to Doppler imaging. Because the star isn’t spherical, the process is called Roche tomography, a nod to the “Roche geometry” that sets the shape of tidally squashed stars. As shown to the left, they find a large spot at the star’s pole and an overall spot covering fraction of about 4%. They redo their entire analysis to account for this spot, but in the end it has a negligible effect on the mass determination because it is rotationally symmetric and visible from all orbital phases.

Even though a large spot doesn’t change the calculation of Cen X-4’s mass ratio, it does have other implications. Low-mass X-ray binaries generally fall into two categories: those with evolving companion stars and those with relatively un-evolved companions. In the first case, mass transfer is driven by stellar evolution. In the second case, mass transfer is driven by angular momentum loss. Angular momentum can be lost through gravitational radiation or magnetic braking, and the definitive presence of a star spot suggests that magnetic activity may indeed play a role in the evolution of X-ray binaries.