Engineering at the SOAR Telescope in Chile

In December I headed down to Chile to work on the SOAR Telescope, a 4.1-m telescope located on top of Cerro Pachon, right next to the Gemini South Telescope. UNC is a partner in SOAR, along with Michigan State, NOAO, and Brazil. As part of this partnership, my advisor built the Goodman Spectrograph for SOAR. It was installed and has operated at SOAR since 2005. The SOAR staff does a good portion of the maintenance and upkeep of the spectrograph, but there are some things that only my advisor and his graduate students (me!) can do and well as some final upgrades we work on. So about once a year, my advisor visits SOAR to work on these aspects. This time, myself and one other graduate student were able to tag along and assist with these maintenance items and upgrades. 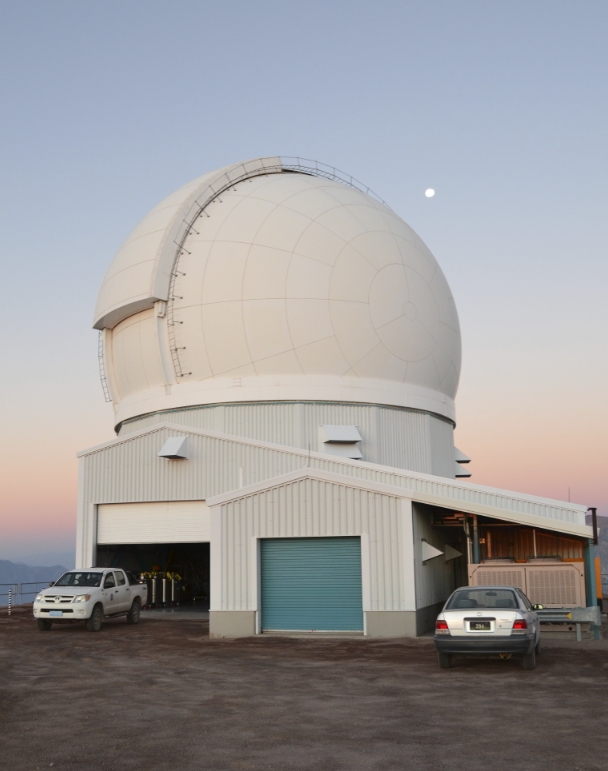 The SOAR Telescope in Chile.

We spent five nights on top of the mountain. The first half of our trip was spent mostly checking the status of various components and testing new hardware. My advisor taught us how to check the optics system to see if they needed cleaning. The spectrograph is inside a case inside the telescope dome, but dirt can still accumulate on the optics over time. We try to avoid cleaning the optics, however, because we would have to take the spectrograph out of its case, which is risky for the spectrograph and stressful for us. Fortunately they were clean, so no tears needed to be shed.

We had also brought a backup shutter with us to Chile. If the shutter of a spectrograph breaks, you cannot get any light to your camera, so it is a major failure mode, which is why it is useful to have a working backup. To confirm it worked, we unplugged the current shutter, wired in the backup shutter, then ran it through a series of tests. Convinced that it worked, we replaced the current shutter and put the backup in storage to be ready for a call to action if the need arises.

One of the main tasks during our trip was final commissioning of a new type of observing mode for the spectrograph. Traditional, long-slit observing allows you to collect spectra on multiple objects, but only if they lie along the same line. Multi-object spectroscopy (MOS) allows you to collect spectra of many objects in the field of view. This is particularly useful for crowded fields like globular clusters, open clusters, or galaxy clusters. With long-slit spectroscopy, you would have to spend time rotating and lining up many different stars or galaxies on the slit. Multi-object spectroscopy allows you to get set-up once and go. 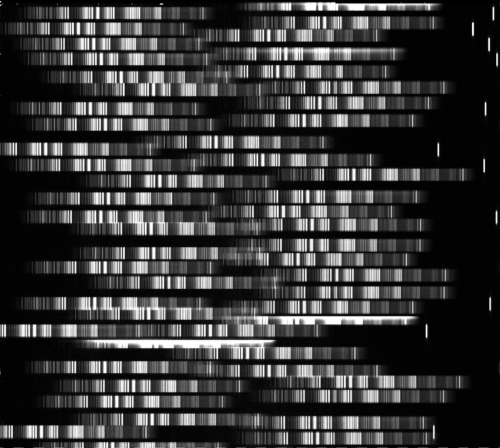 Example of multi-object spectroscopy, taken with the GMOS Instrument on Gemini. Each row in the images is a spectrum of a different object. Image Credit: Gemini Observatory / AURA

Two of the nights on the mountain were assigned to us as engineering nights to test the MOS system. I helped lead this part of the adventure. The software for making MOS observations with Goodman has been built and operable for a few years, but only with our assistance. The goal of these two nights was to advance the system to a state where any astronomer could use it.

Because we were physically at the telescope, we had daytime access to everything and could begin this testing in the afternoon. I was mostly in charge of making sure the software and GUI worked correctly. There were a number of fixes we already knew needed to be made which I started working on. Of course, nothing worked after I made all the changes. I had to undo all the changes then implemented each change and tested it before moving on. I definitely re-learned the lesson of not making too many software changes without testing! We spent the rest of the afternoon trying to break the software; we wanted to find all the bugs we could before testing it later that night.

An astronomer from Michigan State who wanted MOS observations had agreed to test the system for us. He videoed in that evening to observe and test everything while we were present to assist as need be. At this point, I was very familiar with how the system worked. My expectations came directly from the software because I had spent so much time with it. But his clean slate approach provided a viewpoint of how a different user would interact with the system. I realized changes that needed to be made so that the system would be simpler and easier for astronomers when I was not there to assist. We returned to UNC with an list of changes that need to be made in order to release this system to the public.

It was a great experience traveling to Chile and SOAR. Engineering trips are very different from observing trips. The goal for this trip was not to collect data for the science I study. It was to improve the spectrograph for the use of other astronomers. I think this did add some stress to the trip, especially when we left knowing everything needed to be operational. At the same time, though, it made the trip and the things we accomplished more meaningful. I have used SOAR and the Goodman Spectrograph many nights to observe, but seeing it in person is a different experience. I certainly am biased, but I find telescopes beautiful to look at. Perched on the most remote mountain peaks around the globe, they are a testament to our curiosity and willingness to study and try to understand the universe. I can’t wait to go back!