Two roads through the green valley 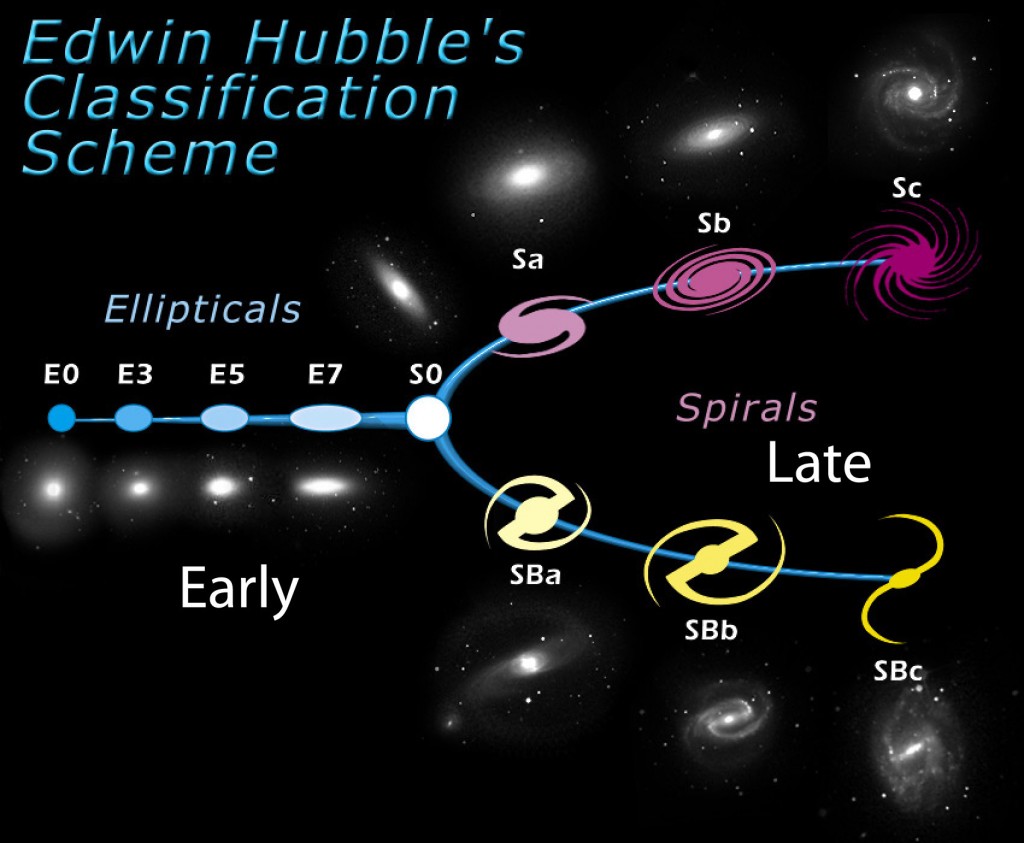 Large surveys of galaxies have revealed a bimodal color distribution: most galaxies tend to be red or blue, leaving a gap in the middle known as the green valley. The commonly accepted explanation for this is that galaxies transition rapidly from blue and star-forming to red and dead (little to no star formation), making it unlikely for astronomers to catch them in the green intermediate stage. The authors of this paper use morphologies provided by the Galaxy Zoo project to show that not all galaxies take the same quick dash through the green valley.

Specifically, the authors divide up a large sample of galaxies from the Sloan Digital Sky Survey (SDSS) using morphologies as identified by the Galaxy Zoo project. Galaxies can be classified by their shapes, given generally as early and late types, which corresponds roughly to having less and more structure respectively, as seen in Figure 1. It’s worth pointing out here that the terms “early” and “late” are misnomers. Edwin Hubble thought that galaxies evolved from left to right on the tuning fork classification scheme he developed. He was wrong (in fact, they probably evolve backwards, with late type galaxies merging to become early types), but the terminology stuck. Early and late type galaxies do, however, have distinct evolutionary histories and very different colors, as seen in Figure 2. Keep in mind that galaxies in isolation will always evolve from blue to red eventually, since young stars are bluer than old stars, and no galaxy can keep making new stars forever. 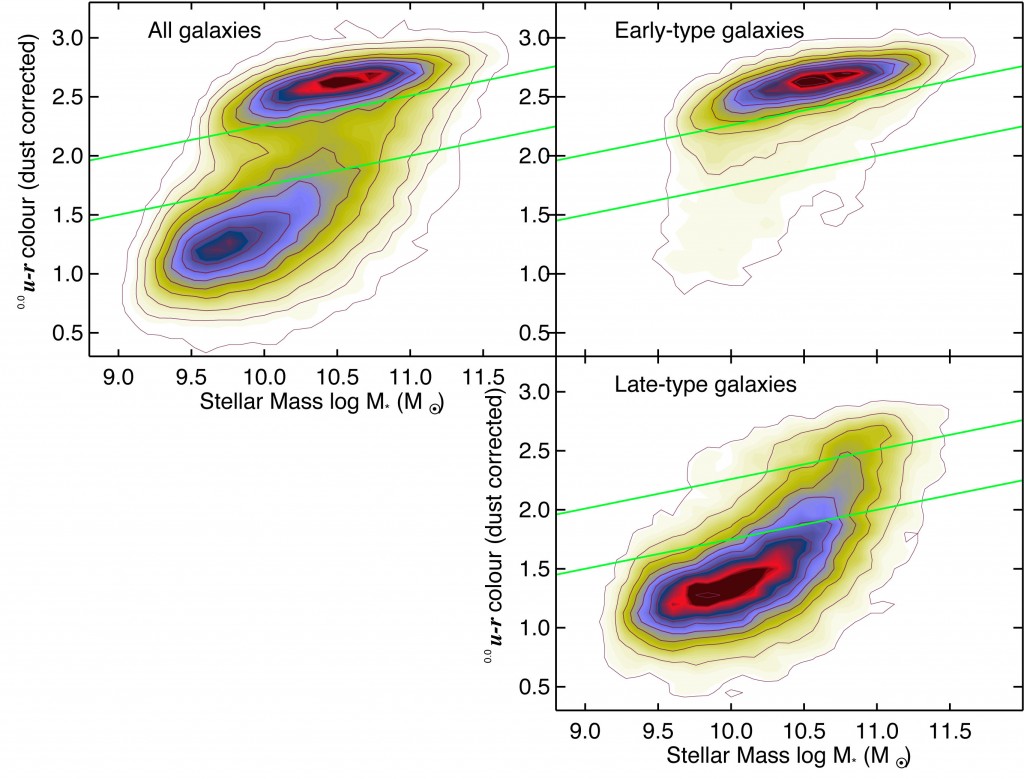 Figure 2. Each plot shows galaxy mass along the x-axis and color along the y-axis, with bluer galaxies appearing towards the top, and redder galaxies appearing towards the bottom. The “green valley,” defined by the gap in the top left panel (comprising all galaxies), is also drawn on the top right (only early type) and bottom (only late type) panels. Crucially, it does not look like a valley when only one type of galaxy population is viewed at a time. Credit: Schawinski et al.

By dividing the galaxies by morphology, the authors see that the green valley is essentially a superposition of two distinct galaxy populations. The green valley here is not made up of galaxies that are transitioning from late to early, as those were identified by Galaxy Zoo as “indeterminate” and are not presented in this plot. The authors argue that the green early galaxies should not be lumped together with the green late galaxies, and explore how each population ends up in the valley.

There are many different ways to learn about the star formation and evolutionary history of a galaxy. HI gas reservoirs are the fuel for star formation, so galaxies with HI can still have ongoing star formation, while galaxies lacking HI reservoirs have stopped making stars. Looking at the gas kinematics can indicate whether a galaxy has had any recent encounters or merger activity, which can trigger star formation. Stellar populations tell us information too: Hα, ultraviolet, and optical light all trace stellar populations of different ages. O and B stars, for instance, have very short lifetimes, so seeing evidence of those stars tells astronomers that star formation is ongoing or only very recently stopped.  By combining all of this information for both populations, the authors find that the early type galaxies shut off on much shorter time scales (<250 million years) than late type galaxies (>1,000 million years).

A galaxy stops forming stars when it runs out of gas with which to make stars. In late type galaxies, the star formation rate shuts off slowly enough that it could be explained by the galaxy simply running out of a supply of gas, like an engine sputtering off when it runs out of fuel. These galaxies then slowly descend into the green valley. But in early type galaxies, the star formation shut off happens too abruptly for that explanation. Early type galaxies are the most evolved galaxies, and so most of them are red, as seen in Figure 2. The early types that are blue are likely the result of recent major mergers, which stir up the gas enough to trigger bouts of star formation. But something about early types shuts that formation off again extremely quickly, causing them to sprint into the green valley. Early type galaxies are known to host AGN, so it’s possible that AGN feedback could destroy the gas reservoir on short timescales, but the authors say they need more observations to prove that theory.

In summary, the Galaxy Zoo morphologies have given astronomers a new angle on galaxy populations, and what once appeared as a simple bimodal color distribution can now be seen as a detailed picture of galaxy evolution.