The Obama Administration just released its budget request for fiscal year (FY) 2015. While not much has changed from previous years regarding NASA, a few “minor” tweaks will elate some communities and devastate others. In particular, the White House wants to slash the budget for the Stratospheric Observatory for Infrared Astronomy (SOFIA, the 2.5 m telescope that flies around in a 747). The resulting savings would fund an extension of the Cassini mission to Saturn and its satellites, among other things. Before diving into this year’s wonky details, you might want to read a general overview of the federal budget process or two meditations about NASA’s strategic direction.

When Republicans took over the majority in the House of Representatives in 2010, they started rancorous debates over the appropriations process. The country began lurching from fiscal crisis to crisis—or cliff or whatever metaphor you like. Federal agencies couldn’t plan more than a few months ahead at a time. Our credit rating got downgraded. You know the story.

Republicans and Democrats, represented by Representative Paul Ryan and Senator Patty Murray, respectively, announced a welcome compromise in 2013, which President Obama quickly signed into law. The Bipartisan Budget Act of 2013 eliminated some of the onerous, indiscriminate cuts mandated by sequestration and set overall spending levels of $1.012 trillion for FY 2014 and $1.014 trillion for FY 2015. Notably, this act only imposes an overall cap. The various appropriations committees in Congress can decide what programs to cut or fund to get to that number. 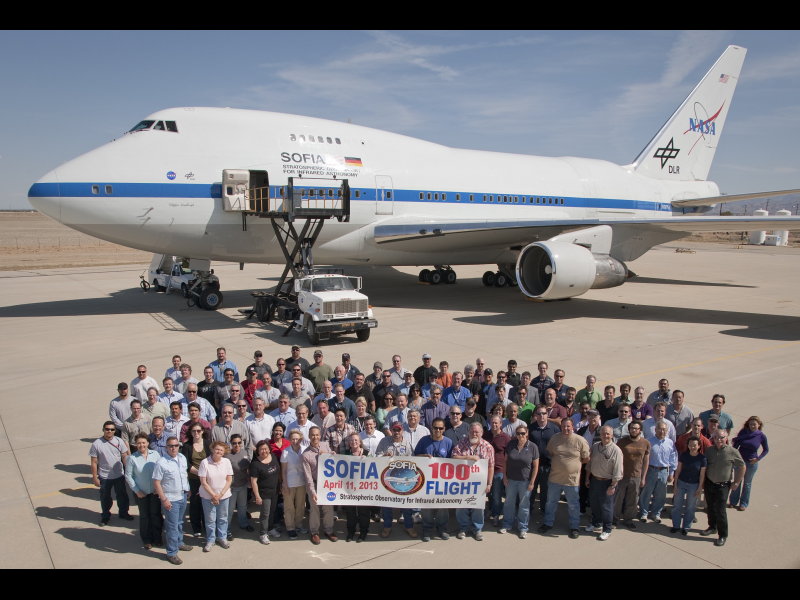 The Stratospheric Observatory for Infrared Astronomy (SOFIA) sits on the ramp in Palmdale, CA as mission staff celebrate its 100th flight. SOFIA may be the latest casualty of our age of austerity. In times of flat budgets, doing anything new requires ending operating missions, some of which may still be producing good science.

This new budget request adheres to the requirements of the Bipartisan Budget Act. Because the Obama Administration believes that more government spending could significantly improve the national welfare, there is a supplemental request totaling $56 billion, called the Opportunity, Growth, and Security (OGS) Initiative. (I think they considered calling it the Annoying Republicans by Supporting Progressive Priorities Initiative but then decided to try staying non-confrontational.) This initiative would send an additional $886 million to NASA beyond the $17.5 billion in the primary request, but House Republicans have essentially declared this addition dead on arrival (i.e., the GOP will not agree to any appropriations beyond the 2013 caps). I’d bet that Congress accedes to the core of the President’s request for NASA, because it’s basically a continuation of what Congress has recently passed. But Congress is forever fickle.

The End of SOFIA?

SOFIA is an infrared telescope that flies in the stratosphere, above most of the water vapor that bedevils ground-based observers. (One Astrobites author took an informative tour in 2013.) Right now, NASA supplies 80% of its funding—the remaining 20% comes from the German space agency (DLR). The history of SOFIA is rife with cost overruns, technical delays, and even attempted cancellations. Now, astronomy missions are no strangers to these problems. But SOFIA’s are unusually severe. Its cost per hour of observations (>$300,000) currently rivals NASA’s most expensive missions, including the Hubble Space Telescope. The final instrument on SOFIA was just fully implemented, but the plane will shortly be grounded for half a year of maintenance. Sadly, all these factors make SOFIA low hanging fruit for cutting in our age of austerity. All scientists wish that we could fund every innovative mission that produces quality science. But without perpetually increasing budgets, some things must be prioritized.

The FY 2015 budget request “proposes placing SOFIA into storage due to its high operating cost and budget constraints.” This ignominious fate could be avoided if Germany or some other partner were able to step in and supply the lost funding. The rationale is that “savings from SOFIA can have a larger impact supporting other science missions.” NASA hasn’t yet specified what missions will benefit from SOFIA’s potential downfall, but the Explorer program of targeted, small-scale astronomy missions and the extended Cassini mission are popular guesses.

Planetary scientists were worried that NASA would send Cassini plunging into Saturn’s atmosphere years ahead of schedule for want of sufficient funding. (Any watching aliens would likely shake their heads, or head-equivalents, in a mixture of bemusement and disgust.) Cassini is extremely popular, so it seemed likely that NASA would find money to keep it going. The question, however, was where. By proposing an effective end to American investment in SOFIA, it looks like NASA has answered.