The Type 1a supernova discussed in this paper is called 2011fe, because it was the 161st supernova discovered in 2011. It has been one of the most well studied supernovae because it is relatively close, in the galaxy M101. It is also one of the earliest detected supernovae. Type 1a supernovae are characterized by a very standardized lightcurve. Often, supernova are not detected until they reach near peak brightness, leaving it an open question exactly how long they take to reach the peak brightness. 2011fe was discovered by the Palomar Transient Factory very early on in its rise in brightness.

The Hubble Space Telescope imaged the region of the sky where 2011fe was later found a few years prior to the explosion. The images were taken in a narrow filter to observe He II emission (singly ionized helium). For the single degenerate model, if the white dwarf is accreting mass at a high enough rate, it will become an x-ray source. The x-ray luminosity could be high enough to photoionize He II in the surrounding interstellar region and create a bubble that would be detectable in these observations.

The accretion rate can be divided into different regimes to help shape observational expectations. Once you build up ~10-4 solar masses of hydrogen on a white dwarf surface, the hydrogen will start to burn. So at a particular rate of accretion, the white dwarf would steadily burn hydrogen on its surface. White dwarfs in this range are known as supersoft x-ray sources, because their x-ray energy is relatively low. If the white dwarf is accreting mass at a higher rate, the system is referred to as rapidly accreting. It is thought that rapidly accreting white dwarfs burn hydrogen stably on their surface, but also have an outflowing wind that would excavate a cavity around the white dwarf. Any white dwarf that is an x-ray source should create an ionized shell around the white dwarf. The shape, extent, and luminosity of He II would give clues to the accretion rate and timescale of mass transfer. 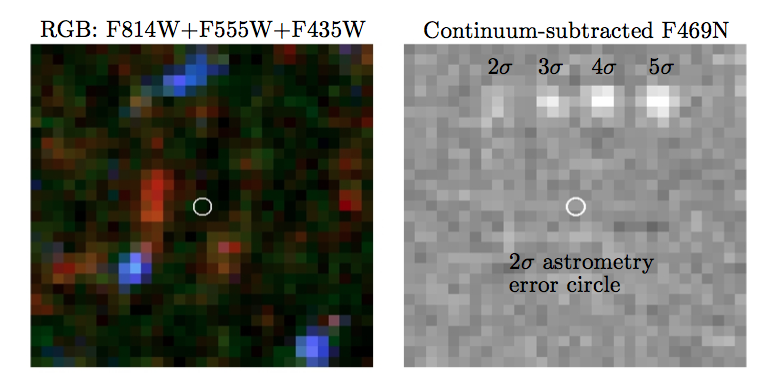 Figure 1: Imaging of the location of 2011fe. The left shows a RGB composite image with the location of 2011fe denoted by the circle. On the right is a continuum-subtracted image of He II, so only He II emission should appear. At the top are simulated sources showing how various detections would look.

Figure 1 shows the results from the Hubble imaging. The image on the left shows a RGB combination of three different images. At the center of the image is a circle showing where 2011fe was later detected. At right is the image using the filter centered on He II, again with the location of the supernova detection indicated by the circle. At the top, the authors show what sources would look like for signal to noise ratios of 2-5. From these, you can see that no He II is detected at the location of 2011fe.

Not detecting any He II allows the authors to place limits on the luminosity, and thus accretion rate onto the white dwarf. The smallest detectable shell from these observations is about 6 parsecs. If the shell were any larger than this, it should be visible in the data. The authors are thus able to rule out a supersoft x-ray source within the last ~105 years. Additionally, the authors also eliminate a rapidly accreting system because of the  non-detection. From this, they place a constraint on the mass transfer rate onto the white dwarf. Since the supernova is only 2 years old, and based on a typical supernova velocity for the ejected material of ~20000 km/s, the ejected material is only .015 parsec from the source. Thus, a search today for an ionized shell at lower luminosity should still be possible and not contaminated by the supernova.