Twinkle, twinkle, little star,
Your brightness fluctuations reveal what you are.
(with apologies to Jane Taylor)

We have repeatedly seen how Kepler goes above and beyond its original mission of finding exoplanets. Today’s paper is no exception. For 540 stars observed by Kepler, García et al. measure rotation periods and photometric magnetic variability for 310 of them. They use previous results from asteroseismology to investigate relationships between the stars’ ages, rotation rates, and levels of magnetic activity.

What’s in a light curve?

Many different physical effects can be responsible for a star’s changing brightness with time. These include:

Putting the pieces together

Because stars at different stages of their lives are physically very different, the authors split their sample into three categories based on temperature and surface gravity: hot stars, cool main-sequence dwarfs, and subgiants. All these stars are referred to as “solar-type” simply because they show global physical characteristics similar to the Sun that we can observe with asteroseismology, not because they share all of our Sun’s properties.

Rotation rates (left) and levels of magnetic activity (right) for the sample of 310 oscillating stars. The stars are divided into three groups: hot stars (red), cool main-sequence stars (blue), and subgiants (green). As expected, hot stars spin faster than main-sequence stars, and subgiants spin more slowly. However, all three groups have about the same level of photometric magnetic activity.

As shown in the left histogram, the authors find that hotter stars spin faster than cool, main-sequence dwarfs. This result is expected, because cool main-sequence stars experience magnetic braking and generally “spin down” over time. Essentially, angular momentum is lost when material is caught in the star’s magnetic field and expelled. In contrast, hot stars should not show this trend, because they have a thinner layer of convection and magnetic braking is weaker. As stars expand and evolve into subgiants, conservation of angular momentum requires them to spin more slowly than before, and this is also observed.

Interestingly, the right histogram shows that all three categories of stars have similar levels of magnetic activity. The authors point out that these stars were pre-selected based on the criteria that they can be studied with asteroseismology, which may introduce two biases. First, magnetic activity has been shown to inhibit oscillations in some cases, which would skew the sample toward less overall magnetic activity. Second, stronger oscillations tend to appear in stars that are older, which would skew the sample toward an older population. 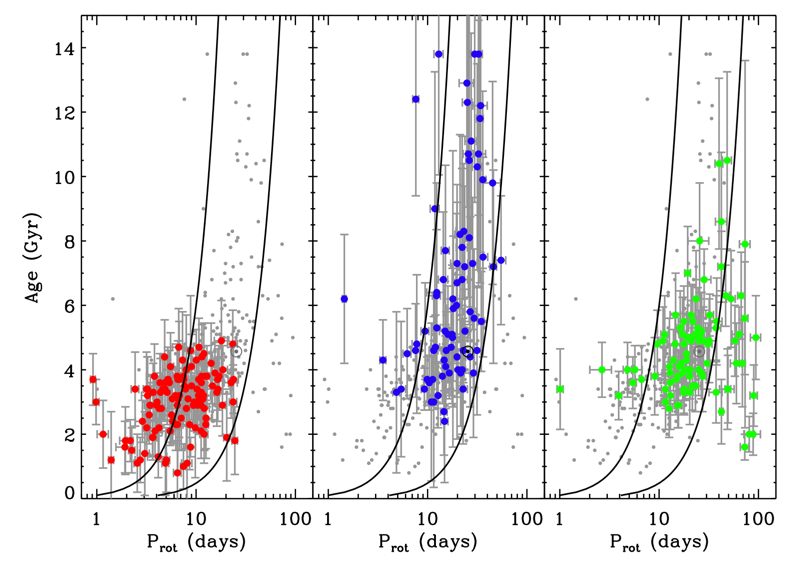 Ages from asteroseismology plotted against rotation rates for the sample of 310 oscillating stars. Solid black curves represent a previously-derived period-age relationship for cool main-sequence stars. As expected, the cool main-sequence stars (blue) in the authors’ sample fall between these lines. However, hot stars (red) and subgiants (green) have their own trends, and it would be incorrect to adopt the same period-age relation for all stars.

One result stands out: if you want to use easily-measured quantities like stellar rotation or amount of magnetic activity to learn about a star’s age, it is crucial to know what kind of star you are looking at.