Practically all areas of research in astrophysics depend on how well we understand the life and death of stars. Habitability of exoplanets? Yes. Evolution of galaxies? Definitely. The nature of dark matter? Yup. The search for extraterrestrial life? You bet. This is such a crucial component of astrophysics that I decided to discuss the issue in more than one bite (the next one is coming soon). Stars are ubiquitous and drive countless phenomena in the universe. And that is why, at the end of every day, I always ask myself: how much should we trust our understanding of stellar evolution? 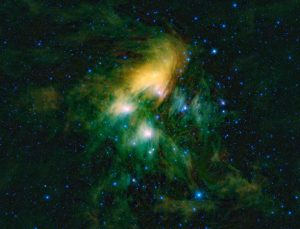 The Pleiades cluster in infrared. This well-known object is a laboratory for testing theories of stellar evolution and structure. Credit: NASA/JPL-Caltech/UCLA

No need for alternative facts

Now, I don’t want to sound like a conspiracy theorist or anything, but this is something that is keeping some of us awake at night. Let’s start with the Achilles’ Heel of modern astrophysics: ages of stars. Except for very special cases, stellar ages are particularly tricky to measure because stars change very little throughout their lifetimes. To complicate things further, small changes in the interior structure of a star can produce significant changes in its surface chemical composition. This is why we need our models to be very accurate so that we can have decent estimates of the physical properties of stars (notice that I said “decent”, and not “good”).

There are many stellar evolution models out there and they are very similar, but it is not clear if any of them are even correct. For starters, it is practically impossible to compute stellar evolution from the first principles of physics, which is why we have to appeal to a series of simplifications and assumptions. Different authors apply different theoretical shortcuts, leading to the emergence of different models.

Suppose you observed a star identical to the Sun with the Gaia spacecraft and you want to estimate, say, its mass (see Meredith’s bite for a summary on how this estimation can be performed). The authors of today’s paper found that, depending on which one of six available models is chosen, the mass of the star will be between 0.97 and 1.01 solar masses. That is actually a pretty good agreement, which means the models are consistent with each other (see Fig. 1). This is expected, because stellar evolution codes are usually calibrated to reproduce the Sun at its exact mass and age, which we know from other, more precise and accurate methods. 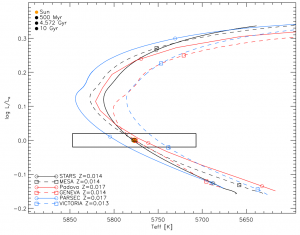 Figure 1. Evolutionary tracks of a star identical to the Sun (atmosphere temperature in the x-axis, luminosity in the y-axis). The curves are for different models, and the sets of symbols represent different ages. The square corresponds to the observational uncertainties of the Gaia satellite. Notice that all models fall well inside the observational uncertainties, which signals that they are consistent.

The significant differences start to emerge when we work with stars that have masses and ages that depart from solar values. These are the regimes where our uncertainties about the approximations and assumptions may catch us off-guard. The authors observed that the six stellar evolution models of stars with 3 solar masses are particularly divergent after the main sequence phase (see Fig. 2). 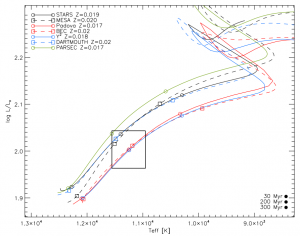 Figure 2. Similar to Fig. 1, but for a star with 3 times the solar mass. Notice that the models are much more divergent in this case.

How to mix a giant ball of plasma

Another issue is that more recent developments in the theory of stellar structure, such as radiative diffusion (which we will discuss in part II), have an impact on the outcomes of models. When the authors tried to re-calibrate these changes with the Sun (using the openly available code MESA), they could not obtain a perfect global fit; it was either a good fit for the solar luminosity and temperature, or its chemical composition, but not all of them at the same time.

Proposed by Erika Böhm-Vitense in 1958, one widely used approximation to model the convection of material in the atmospheres of stars is known as the mixing length theory (MLT). In a nutshell, the mixing length is the distance a convective cell traverses before dispersing itself. MLT has since been very successful in stellar evolution models, but it comes with a strong caveat: too many free parameters. That means that we observe a well known-star (e.g., the Sun) and calibrate these parameters so that the outcomes of models reproduce what we observe. Free parameters bother us because we don’t know to what extent they are applicable. An alternative to MLT that looks promising is the implementation of 3D hydrodynamical simulations of convection.

In summary, it turns out that asking “what model should I choose?” is not that useful of a question; what we should actually ask is what are their assumptions and approximations. That way, we are able to analyze if the model is applicable or not to our research given its limitations. In the next part, we will discuss another development on stellar structure that is being heavily discussed by the community, and how it affects stellar age estimates and the search for cosmic siblings.