When we look at most stars, our observations are quite limited. We can measure stellar temperatures and colors quite easily, as well as star’s brightness. In the vast majority of cases, physical parameters like the star’s mass and radius are not directly measurable. To measure a star’s mass, we need the star to have a binary companion close enough that we can observe their orbital motion around each other. To measure a star’s radius, in general we not only need a binary companion, but the pair must be eclipsing. For a few stars we can measure their angular size directly, but this is limited to a handful of giant, nearby stars.

There are only a small percentage of stars in eclipsing binary systems, meaning a small minority of stars have measured masses and radii. In the vast majority of cases, we must rely on stellar models to estimate physical parameters. Astronomers have developed theoretical predictions for what a star of a given mass and radius (and age, metal content, rotation rate, and more!) should look like in our astronomical detectors. These models are calibrated on the few stars with known constraints.

But how good are these models? We know the models of solar-type stars are pretty good. After all, we have a really bright calibration source to compare against! Recently, there has been some evidence that the models may not be perfect: studies of M dwarfs find that their measured radii are a few percent larger than those predicted from the models. In this paper, the authors find more potential issues with the models. 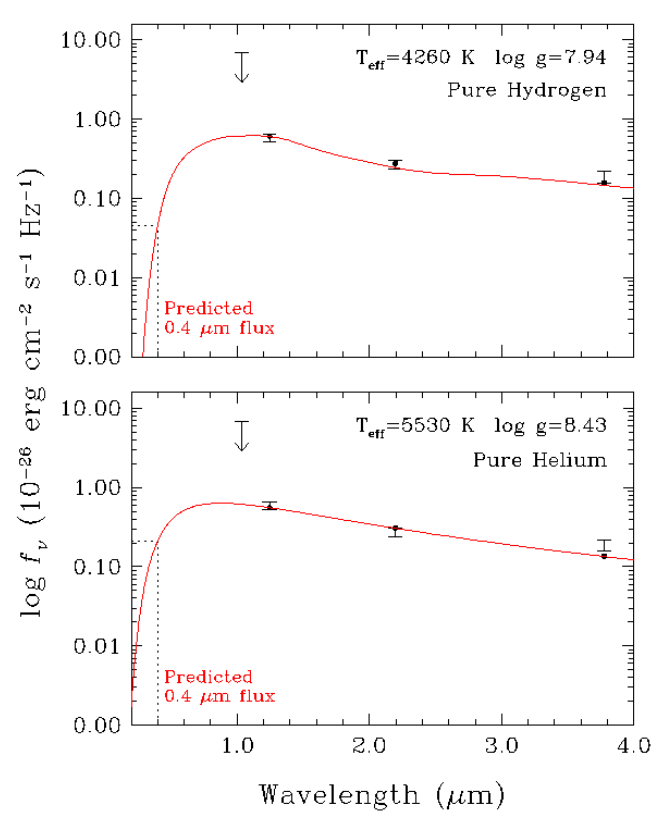 From the observed white dwarf spectrum in the near-infrared, the authors determine the white dwarf is primarily made of hydrogen and has an age of nearly 8 billion years.

Matthews et al. study HD 114174, a system with a binary companion uncovered by some of the same authors last year. The binary companion is a stellar remnant called a white dwarf with a mass just over half the Sun’s. White dwarfs cool regularly and predictably, so from its luminosity and spectral energy distribution, the authors determine it must have an age of 7.77 ± 0.24 billion years. The primary star is probably very slightly larger than the Sun, with a mass of 1.05±0.05 solar masses. The authors of this paper try to measure its age via two methods. By comparing its position on an HR diagram with evolutionary models, the authors estimate the star has an age of 4.7 ± 2.5 billion years. That’s quite the uncertainty! Fortunately, they were able to apply another method: as a star ages, its rotation slows slightly as the star’s stellar wind carries away angular momentum. Thus, by measuring the star’s rotation period, its age can be estimated. (This process is called gyrochronology, and is the primary research interest of Astrobiter Ruth Angus.) For this star, the gyrochronological age is 4.0 ± 1.0 billion years.

That doesn’t make any sense! For both stars to be in a close binary system, they almost certainly formed at the same time. The white dwarf, an end state of stellar evolution, should then be slightly younger than its companion on the main sequence, yet the opposite is true. What’s going on? The authors propose a few possibilities. First, the stellar models could be incorrect, which would be a very exciting result, potentially leading to the development of new, better models. Another possibility is that the main sequence star had its rotation rate increased by some process during its life. This is plausible! Stellar lifetimes are inversely proportional to stellar masses, so the white dwarf (having reached its evolutionary end state) was originally the more massive star of the pair. As this larger binary companion went through its asymptotic giant branch phase on its way to becoming a white dwarf, it would have had a very strong stellar wind. This wind could have “spun up” the main sequence star, making its gyrochronological age appear smaller than its true age. A similar effect has been observed in another star, HD 8049.

To test this theory, the authors need more observations to improve their age estimate through evolutionary models, which is currently woefully underconstrained. With such observations, Matthews et al. will be able to determine if this star is really older than it pretends to be (maybe it’s embarrassed about its age: I don’t think there’s a Just for Stars hair dye yet!), or if our dating methods need to be improved and our physics is lacking.