Article: An Improved Age-Activity Relationship for Cool Stars older than a Gigayear

Status: Accepted for publication in the Monthly Notices of the Royal Astronomical Society, open access on arXiv

Among humans, it is kind of rude to ask for somebody’s age if you’re not well-acquainted with them, but at least we generally understand basic human physiology well enough to make educated guesses about how old they are. We can do something similar if we want to know the age of a star. Just by asking them? No, that would be silly! Instead we can guess how old a star is based on how it looks and acts (although it is sometimes a bit misleading).

Also like humans, stars get less active as they get older, and we can measure that in different ways. One of them is by assessing their rotation, which slows down as stars age; because rotational rates correlate with magnetic activity, the latter also grows weaker with time. If we know how fast a star rotates or how active it is (i.e., the frequency of flares, coronal mass ejections and size of starspots), we can estimate its age — this is known as gyrochronology (see Fig. 1). This method is not as precise as measuring the ages of open clusters using isochrones, but we do understand the magnetic and rotational evolution of stars well enough to apply gyrochronology with satisfactory results when no better option is available. 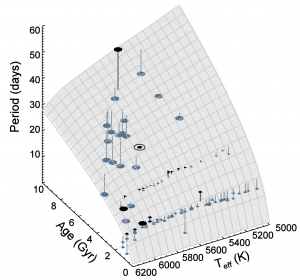 Figure 1. The rotational period of stars (z-axis) is correlated with their age (x-axis) and surface temperature (y-axis). This relation allows us to estimate stellar ages from parameters that we can directly observe. Figure from van Saders et al. (2016, Nature 529).

A different kind of clock

Because it is relatively easy to measure ages in young open clusters (since they have many stars and they have very clear features that help in characterizing them), gyrochronology is very well calibrated for stars younger than 1 billion years; see Meredith’s bite on how this calibration is performed. Things get murkier for older field stars — those that are not in clusters — and this is where today’s paper comes in. The authors attempted to perform a robust calibration between activity and stellar age for field stars older than 1 billion years using independent measurements of these two parameters.

First, Booth and collaborators gathered data for a sample of 24 cool stars (those with surface temperatures between 3000 and 7000 K; as a reference, the solar value is 5777 K). The stellar ages are derived mostly from asteroseismology, while X-ray luminosities from the XMM-Newton and Chandra telescopes are used as representatives for magnetic activity. You can see where this is going: the next step would simply be plotting these two parameters against each other and go straight to analysis, right? Well, not so fast.

Stellar activity is known to have a strong dependence on the mass of the star, which is in turn reflected in its surface temperature and luminosity. The usual solution people apply to take this correlation into account is to simply separate the sample in bins of different masses and from that build a stellar activity law that depends on mass and age. However, the authors were already working with a small sample to begin with, so binning their stars could lead to inaccurate results. Instead of using luminosities, they used X-ray fluxes (X-ray luminosity divided by stellar surface area), which removes the dependence on mass (see Fig. 2). 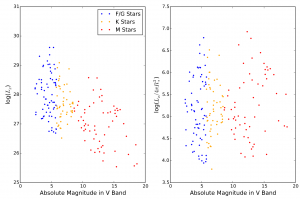 Figure 2. When the luminosity (y-axis, left panel) is divided by the stellar surface area, we have a flat distribution of fluxes (y-axis, right panel), thus removing the dependence of stellar activity on stellar mass (which is represented by the absolute magnitude, x-axis)

“The time is gone, the song is over”

With that out of the way, we can focus on the results. Booth and collaborators found that the magnetic activity of cool stars decays faster than expected from previous works (see Fig. 3). What is more striking is that a recent paper by van Saders et al. (2016, Nature 529) found the complete opposite, where rotational deceleration actually gets weaker after the solar age (4.6 billion years). How do we reconcile these seemingly conflicting results? 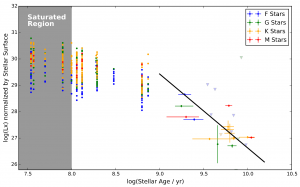 Figure 3. The decay of activity (y-axis) with age is much steeper for stars older than 1 billion years (values in the x-axis > 9) than for younger stars (x < 9). Symbols with different colors represent stars of different masses (or spectral types), and the triangles are upper limits for the X-ray luminosity for faint stars in the sample.

The authors suggest that the conflicting results could be a combination of the following explanations: i) the rotational spin down of stars could also depend on the magnetic field geometry, which has been shown to change with time; ii) the relation between X-ray luminosity and rotational velocity does not remain the same with time. Both these effects could contribute to the disconnection between how rotation and magnetic activity evolve after 1 billion years.

In summary, today’s paper displays a fascinating turn of events. The original goal of the paper was to leverage recent advances in asteroseismology to study the magnetic activity-stellar age relation for cool stars in order to improve gyrochronology for older field stars. But, in the end, it revealed what seems to be a more complex relation between magnetic activity and stellar rotation than we had initially thought.