How Weird Is Our Solar System?

Earth and its Solar System compatriots all have nearly circular orbits, but many exoplanets orbit their stars on wildly eccentric paths. Is our home system strange? Or is our sense of the data skewed? 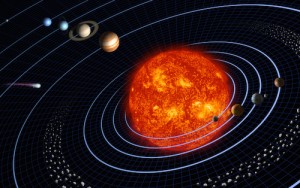 The nearly circular orbits in our solar system, not drawn to scale. VERY not-drawn-to-scale. (Source: NASA)

In looking for and learning about planets beyond our solar system, there is always the question: are we special? On the one hand, per the Copernican Principle, the history of science is practically just a string of discoveries about how we’re not unique: we’re not the center of the Solar System, the Solar System isn’t the center of the universe, our galaxy is one of many, and heck, this might not even be the only universe. Planets, we’re discovering, are a dime a dozen. A dime a billion.

But in one very big way, we’re afraid we’re unique: in being alive. The question of Earth’s specialness is at the center of questions about life elsewhere in the universe. Do other planets have water? Are these planets in their habitable zones? Good atmosphere? Plate tectonics? The list of qualifications seems to go on and on, leading us to wonder if maybe at some point the Copernican Principle breaks down.

One such arena for debate has been the structure of our Solar System—as we’ve gained an understanding of other planetary systems, ours has started to look, rather than mediocre, downright unique. We don’t know if our exact situation is necessary for life, but with a sample size of 1, it’s been dismaying to see how different other planetary systems seem to be from our own. Similarly, we built our first theories of planet formation off what we saw in the Solar System. Exoplanet discoveries threw all that into question. We’ve seen hot Jupiters orbiting up close to their stars, planets around binary stars, and, in the focus of today’s paper, a prevalence of very eccentric orbits.

While the planets in the Solar System show consistently low eccentricities in their orbits—their orbits are nearly circular—exoplanets have a much wider range of eccentricities, with a much higher average eccentricity overall. Theories of planetary system evolution have had to work to take this range into account. One approach has been to model system evolution with an eye on multi-planet interaction; prior research has predicted that multi-planet systems might have less eccentric orbits, thanks to planet-planet interactions. Today’s paper uses the data we have on exoplanets to test whether multiplicity—the presence of many planets in a system—could indeed dampen eccentricity. 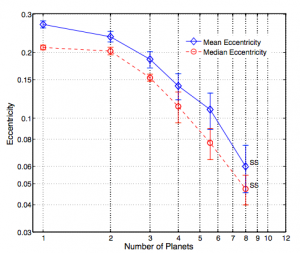 The authors analyzed data for 403 cataloged planets that have been found using the radial velocity technique. (They focused on planets found via radial velocity because this detection method allows for relatively reliable measurement of eccentricity.) While most of these planets orbit their stars alone or with one other planet, some systems with four, five, and even six planets have been found; our own Solar System, with its eight planets, was also included. The authors found a strong negative correlation between multiplicity and eccentricity: the more planets a system had, the less eccentric their orbits were. This correlation is most visible when the mean and median eccentricity are plotted as a function of multiplicity (as shown to the right). The Solar System fits the trend nicely. Maybe we’re not so special after all.

The deviation from the trend was found in one- and two-planet systems, some of which weren’t as eccentric as these findings would predict. These systems may have additional planets as yet undetected; they could be good targets for future searches for companions to known exoplanets.

This statistical analysis lends support to models of planetary formation in which planet-planet interactions within a system contribute to the circularizing of planets’ orbits.  The authors suggest constraints for the relationship of multiplicity and orbital eccentricity that future models should take into account. And overall, this paper reassures us of our ongoing mediocrity. For a multi-planet Solar System, our planets’ low orbital eccentricities aren’t so eccentric after all.

Characterizing the Puzzling Atmosphere of Super-Earth GJ 1214b