T Tauri stars are newly formed proto-stars which have yet to begin fusing hydrogen. These stars are often found very near to star-forming regions because they have not had time to drift away. They are surrounded by large protoplanetary accretion disks and are still accreting material and growing. T Tauri stars typically exist for about 100 million years (Myr) before they begin fusing hydrogen at their cores.

Observations were made of stars in three different star forming regions. UV and optical data show how the spectral energy distribution changed. For the older systems, it is expected that the accretion rate should have dropped and thus should show spectra of weak T Tauri stars. Observations of known weak T Tauri stars, combined with computed theoretical models, show the flux which these systems emit. The same is true for T Tauri stars which are still accreting. The authors compared their spectra to templates created for both types, shown in Figure 1. 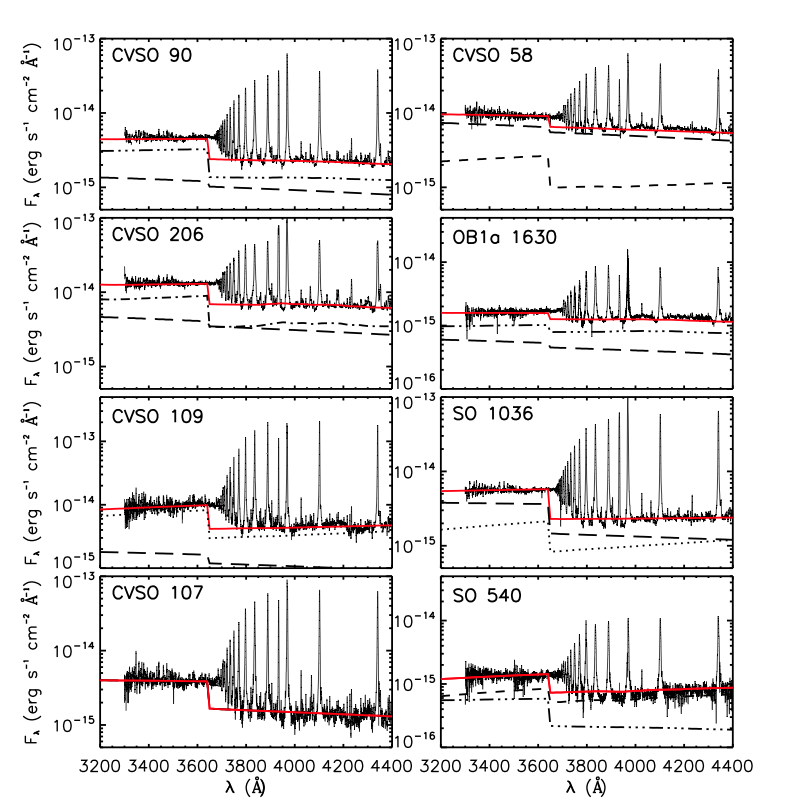 Figure 1: Accretion templates fit to the spectra of eight T Tauri stars. Dashed and dotted lines represent different accretion rate columns. The red line represents the sum of the different rates. The Balmer Jump is responsible for the discontinuity at 3646 Angstroms. The model the authors used does not attempt to fit the emission lines.

Material that is falling onto the photosphere of the star will form an accretion shock which radiates brightly in the UV and X-ray portion of the spectrum. The nearest part of the accretion disk will reprocess this radiation, emitting it in at UV and blue optical wavelengths. So this portion of the spectrum is used to measure the overall accretion rate. The authors then used models to fit the spectra that depend on the energy distribution of individual accretion columns. This distribution depends upon whether radiation is coming from the accretion shock or the reprocessed inner edge of the accretion disk.

The total accretion rate is given by summing the contribution from each accretion column. In Figure 1, the dashed and dotted lines represent the contribution from individual columns. The red line shows the sum of the final summed accretion model. In these spectra, templates of weakly accreting T Tauri stars have been subtracted, leaving only radiation emitted from accretion.

After fitting these spectra, the authors found the total accretion rates were higher than would  be expected for systems of these ages. A number of the systems were around 10-8 or 10-9 solar masses per year. While still lower than the accretion rate for a new T Tauri star, this amount is one or two orders of magnitude higher than expected based on the age of these clusters.