Three years ago we told you about Gliese 581 d, the first discovered terrestrial-mass planet in the so-called “habitable zone“. The article was called “Pack your suitcase?” Despite this title, here at Astrobites we sincerely hope you didn’t actually take off for this star system: earlier this month, a new study claimed this planet and one of its companions don’t actually exist. Instead, astronomers were observing signals caused by the star itself, which they attributed to additional planets in the system beyond the three that have been unambiguously detected.

Gliese 581 isn’t the only planetary system confounding astronomers! The potential planet orbiting Alpha Centauri B has been closely scrutinized recently with inconclusive results. The authors of today’s paper analyze another previously announced planet, CoRoT-7 d, and conclude that it is likely not real either. What’s going on here? To understand why this is happening, let’s look at how Haywood et al. studied this system.

From statistical analyses, we know there are about 100 billion planets in the galaxy. Of these, we’ve detected nearly 2,000 definite planets and have found an additional 4,000 “candidate planets.” Of these 6,000 planets, we’ve actually managed to take pictures of about 20. And that total includes the 8 planets in our own solar system! Most of the time when we detect a planet, we don’t actually see a picture of it. Instead, we infer its presence from observing its effects on its host star. When we detect a planet with the radial velocity method, we observe small changes in the velocity of a star as it and its planet orbit their common center of mass. When we detect a planet with the transit method, we observe small changes in the amount of light we receive from a star as the disk of the star is blocked by an orbiting planet. After detecting either of these effects, astronomers will announce the detection of a new planet.

While finding planets may sound simple, the stars do their best to make it tricky. Stars aren’t static objects: starspots come and go on the surface, evolving in time and rotating across the star’s surface. These starspots are cooler and fainter than the stellar surface, so they cause the amount of light we receive to decrease as they pass along our line of sight, much like a transit! Starspots can affect a radial velocity signal too: as the spot rotates across the star’s surface, it first moves towards us before reaching the center of the star and beginning to move away from us, blocking some of the star’s light and changing the shape of spectral lines. These small shifts can be mistakenly attributed to a planet that doesn’t exist. It gets worse, too: many spots on the surface of a star can slow down the star’s convection, causing the rate at which material bubbles up and down from the stellar surface to change. We observe this as a velocity change, and again can incorrectly attribute this to a planet if not treated properly. 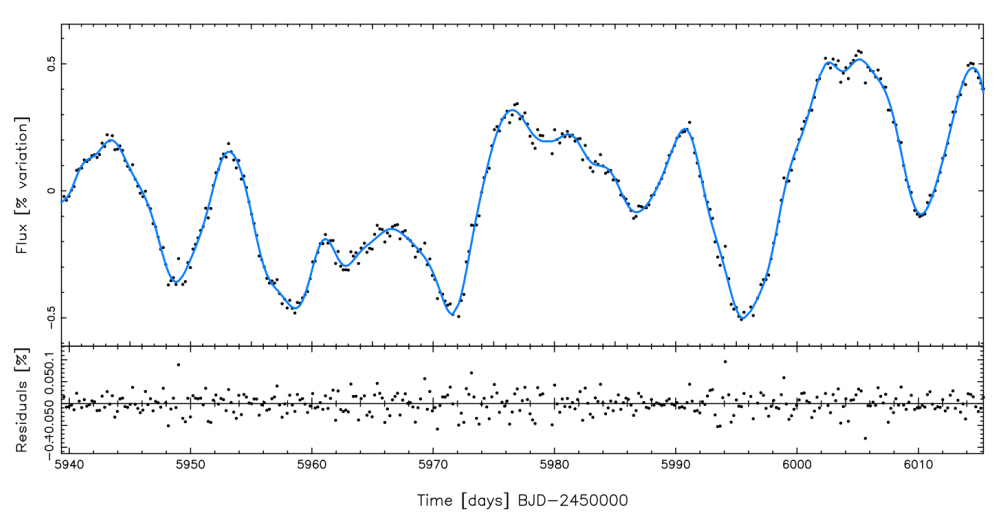 Stellar rotation observed by Haywood et al. The authors observed the star for 75 days and detected significant photometric variability, which they attribute to starspots passing across the surface of the star. Figure 1 from Haywood et al.

The CoRoT-7 system was uncovered in 2009 when the innermost planet, CoRoT-7b was found via the transit method. Follow-up radial velocity observations detected two additional planets. However, the host star is known to be very active, so Haywood et al. decided to analyze the system closely to ensure that all the planets are real, and not artifacts induced by starspots. As we said in the previous section, starspots will affect both the radial velocity data and transit photometry, making both data sets correlated: each data point depends not only on what the planets are doing, but time-sensitive properties of the noise (the starspots).

To alleviate this problem, the authors obtained radial velocity data from HARPS at the same time they collected transit photometry from CoRoT. They then modeled the effects of both the planets and the noise using a Gaussian process, assuming the noise followed a simple functional form. They assumed the RV signal was composed of three components. One of these components is stellar variability, with a period similar to the rotation period. A second is changes in the RV signal due to changes in the convective properties of the star, which depends on the size of the spots. The third is a long-period effect caused by slow changes in the activity of the star. This noise term is used to account for additional astrophysical effects in the stellar atmosphere that may appear in the radial velocity data but not the photometry. If this noise is real its affects must change on the same timescale as the stellar rotation, although it can have a different phase; the authors tie the periodicity of this noise to their fit to the rotation period.

By combining these three effects, the authors were able to develop a complete noise model for the star. They then simultaneously fit the RV and photometric observations to their model, which included two planets and the aforementioned noise parameters. By letting the parameters (mass, orbital phase, eccentricity, amplitude of each noise mode, stellar rotation period, even number of planets!) vary, the authors were able to find which model creates the most appropriate fit and how well we can measure each of these parameters.

The authors try to fit several models to the data. They fit a model which includes just stellar activity, one with 1 planet, one with 2 planets, and one with 3 planets. They find the 0 and 1 planet models can not explain the data well, and that the 2 planet model is favored by a factor of 10 over the 3 planet model. Thus, with 90% confidence the authors conclude the 2 planet model (shown below) is the most appropriate model, suggesting planet d may not exist.

(top) best-fitting model and uncertainties, along with (bottom) residuals to the radial velocity observations collected by the authors. The authors find that only two planets are necessary to fully explain this system, when an appropriate noise model is applied. Figure 5 from Haywood et al.

Since they have very similar effects on our observations, starspots can easily masquerade as small planets. To differentiate between the two, our best hope is to model the noise in our observations simultaneously with the planet parameters. This hasn’t always been done, but the recent controversies over a few supposed planets may encourage astronomers to carefully model their noise before announcing a new planet. Now that Haywood et al. are on the case, we might hear about more planets in the future that, like Alderaan and Krypton, are relegated to ex-planet status.