Tau Ceti has long captured our imagination, and is featured in many science fiction books, movies, and games (e.g. Figure 1). This star has similar mass and luminosity as the Sun and is only 3.65 pc away, making it the second closest G type star to our own (after Alpha Centauri). To fuel the imagination of sci-fi enthusiasts even further, in 2013 five planets orbiting close to the star were tentatively detected with the radial velocity technique. Additionally, astronomers have known since the 1980’s that Tau Ceti hosts a debris disk. The authors of today’s paper take a closer look at this debris disk with the Herschel Space Telescope. 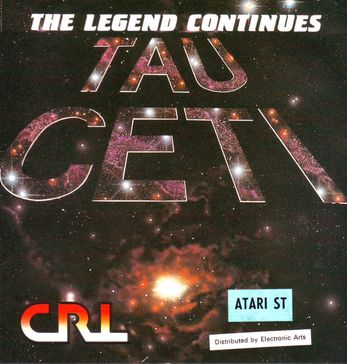 Figure 1: A Tau Ceti Video Game from 1986. Image from Wikipedia.

The dust in the Tau Ceti debris disk emits only in the far-infrared and the sub-mm wavelength regimes, meaning the dust is fairly cold and relatively far from the star. This makes a perfect target for Herschel, which is sensitive to long wavelengths. The Herschel observations resolve the disk at 70 and 160 microns, constraining the outer extent of the disk.

The authors fit model disks to the Herschel images (see Figure 2) and to the spectral energy distribution (SED) of the disks emission. They find that the disk is very broad, extending from somewhere between 1 and 10 AU out to around 55 AU. 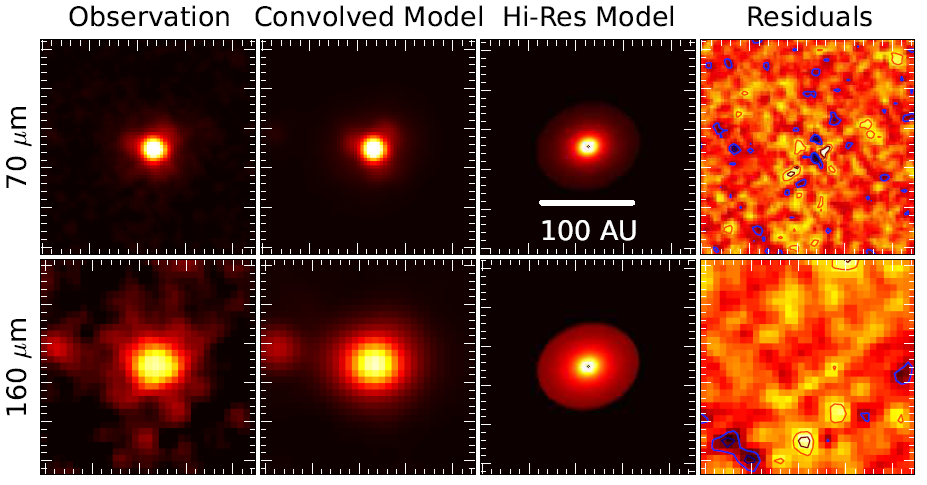 Figure 2: The Herschel images (left column), best-fitting disk models (center two columns), and residuals (right column) of the Tau Ceti disk. The top row is at 70 microns and the bottom row is at 160 microns.

The authors then use the inferred properties of the debris disk to study the planets in the system. The radial velocity method can only measure the minimum mass of a planet, as only the radial component of the planet’s orbital motion can be detected and the inclination of the orbit is generally not known. In the case of Tau Ceti, however, the inclination of the debris disk can be determined from the Herschel images, and it is a decent bet that the star, planets, and debris disk all rotate in the same plane. The author’s find that the system inclination is 30 degrees, and the planets have masses of  4.0, 6.2, 7.2, 8.6, and 13.2 times the mass of the Earth on orbits of 0.11, 0.20, 0.37, 0.55, and 1.35 AU, respectively.

We know that planets will perturb and sculpt a debris disks, as well as scatter each other gravitationally. Is this model of Tau Ceti’s planetary system stable? The authors test this by running dynamical simulations of the planets and disk (see Figure 3). They find that the five planets are very stable (as long as they have relatively low eccentricities) and that debris can exist as close to the star as 1.45 AU, with an additional stable region between the two outermost planets. 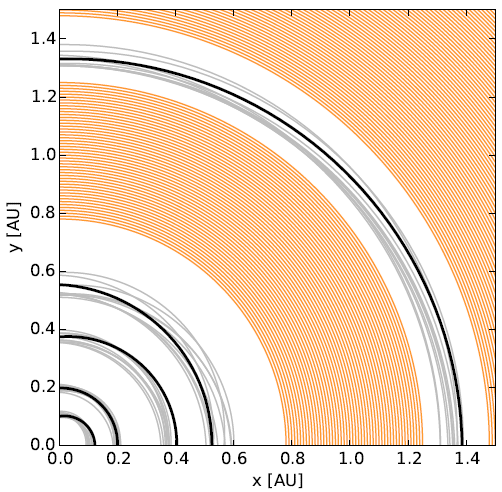 Figure 3: Results of the author’s dynamical stability analysis of the Tau Ceti system. Black lines are the initial orbits of the five planets, and gray lines show how the orbits vary over the course of the simulation. Orange lines show the regions where debris particles are stable.

Future observations of this disk at higher resolution (with ALMA, for instance) will better constrain its inner edge. If the edge is farther out, there may be additional planets in the system with larger orbits, but if the edge is found to be within 1.35 AU, the existence of the original five planets (which were only tentatively detected) would be in question. Science fictions fans will have to wait a little longer to learn the truth about one of their favorite planetary systems.

How to destroy a debris disk