Mature Galaxies in an Immature Universe

Understanding galaxy evolution is a major goal of astronomy. In recent years, much work has been done to understand how galaxies can alter their appearances, form stars or bar structures, how they behave in groups and clusters, and much more. It is an active topic of research, and we are gradually beginning to put together a solid picture of how galaxies grow and mature. However, the most serious challenge lies in understanding the earliest eras of galaxy evolution, how the first galaxies formed, and under what conditions. It’s an open question deeply connected to our understanding of cosmology, and the main difficulty in answering it is simply that it’s extremely hard to see the earliest galaxies.

Astronomers use the fact that light takes time to travel to look back in time. If our telescopes catch light that has been travelling for seven billion years to reach us, then that light was originally emitted roughly around when the universe was half of its present age, by today’s estimates. The farther out we look, the farther back we look. Of course, there are incredible technological hurdles to overcome if we want to keep looking farther out. Finding the earliest galaxies requires long exposures on very sensitive instruments, plus some handy tricks like the ones described in this paper. 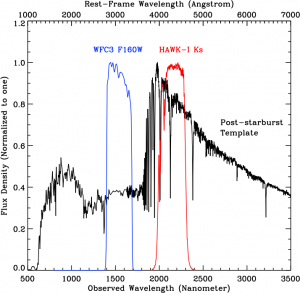 An example of a model Ballmer break galaxy at redshift z=3.6. The break is bracketed by two filters used in this work. Such a galaxy would appear bright in the HAWK-I Ks image, but dim in the Hubble F160W image (from Figure 1 in the text).

The authors of this work describe how they found 16 extremely distant galaxies in the data of the CANDELS survey using what’s called a “break” method: a “break” is a point in a spectrum where the light intensity sharply drops off, mainly because certain colors of light are being absorbed by dust or gas. This means that if you were to take two pictures of the same galaxy in two different filters, one below the break and one above the break, you’d see nothing in the first picture, and a bright galaxy in the second picture (see Figure 1). This spectral feature will then be redshifted with distance, creating a method to potentially find galaxies with these features at great distances.

For a long time, astronomers have used the Lyman Break technique for this sort of thing, but a galaxy has to be forming a lot of stars to have a Lyman break. But a massive and evolved galaxy wouldn’t register with that technique, and some recent studies have shown that such galaxies do exist at such early times. For that reason, the authors use the Ballmer break instead, since it appears in evolved galaxies. Examining the selected galaxies shows that they are between redshifts 3 and 4.5, which means we are seeing them as they were when the universe was only about 1 to 2 billion years old!

There is more to learn from the photometric data, as they include photometry in 14 different filters. By matching all these wavelengths to model galaxy spectra, it is possible to get a rough idea of how old and massive the galaxies must be. The authors find that the galaxies are quite massive (an average mass of ∼ 5×10^10 solar masses) and relatively old: an average age of about 800 million years, at a time when the universe was no older than 2 billion years. That leads to the surprising conclusion that an old, evolved and mostly quiescent (not star forming) collection of galaxies formed this early in the universe – a population of galaxies that we are only now starting to uncover. It is possible that some of these galaxies formed the bulk of their mass only a few hundred million years after the Big Bang and might be the descendants of Lyman break galaxies at higher redshift. Figuring out just how this newly-discovered type of galaxy fits into the larger picture of galaxy formation and the evolution of the universe will tell us quite a bit about these early times. More research is needed!

Two of the sixteen galaxies described in this work, as seen in the 14 different passbands used (from Figure 10 in the paper).