There are arguably a lot of things defy categorization, but it’s not everyday that we find something that suggests we do away with our categories altogether. The authors of today’s paper believe that the recently-discovered Type II supernova ASASSN-13co — read that as “assassin”, please — might just be one of the latter. Its unusual characteristics call into question the validity of the two classes (II-P and II-L, more on that later) into which we usually group Type II supernovae. As a result, they suggest that we treat Type II supernovae properties as a continuum, rather than the discrete designations we’ve become accustomed to assigning.

Type II supernovae are identified by the hydrogen in their spectra (meaning that they still have a hydrogen envelope when they die). They are formed when a star with mass of 8-50 times that of the sun dies through core-collapse.

All stars produce energy through nuclear fusion, but massive stars can fuse much heavier nuclei than stars the size of our sun – all the way to nickel and iron, which have the highest binding energy of all elements. While the fusion of the lighter elements is an exothermic process, fusing iron uses up energy instead, so fusing elements heavier than iron isn’t energetically favorable. As a result, a core of iron and nickel (which then decays into iron) builds up in the center of a massive star. The core is supported by electron degeneracy pressure. When the mass of the iron-nickel core exceeds the Chandrasekhar limit (about 1.4 solar masses), however, electron degeneracy pressure is not enough to stop the core from collapsing. As the core collapses, the protons and electrons in the core of the star merge to form neutrons and neutrinos. The neutrinos can escape and carry away energy. At the same time, the outer layers of the star fall inward until neutron degeneracy pressure kicks in, stopping the collapse and causing the outer layers to rebound.  The combination of the pressure from the neutrinos and the rebound of the outer layers off of the core causes the star to be torn apart in a huge explosion – a core-collapse supernovae.

Left: Archival SDSS data of the host galaxy PGC 067159. Right: LCOGT image that was taken during the supernova. The circles have radii of 2 arcseconds and are centered on the supernova’s position. We can see that there was previously no visible object at the location of the supernova. An image like this is called a finding chart.

These supernovae exhibit a wide range of properties, but have generally been grouped into Type II-P or Type II-L supernovae.  Type II-P supernovae – the P stands for “plateau” – get their names from the long flat stretch present in their optical light curves.  Type II-L supernovae, on the other hand, show a relatively steady “linear” decline in their intensity after reaching peak brightness. However, it has recently been suggested that Type II supernovae light curves may not fall neatly into the two groups, but actually display a continuum of these properties. The authors of today’s paper hope that by studying unusually bright or hard-to-classify events, they will be able to better understand the variations in Type II supernovae and improve upon the current classification scheme.

The focus of the paper, ASASSN-13co, is a supernova that the authors state is both unusually bright and hard to classify. It was detected with the All-Sky Automated Survey for Supernovae (ASAS-SN) on August 29, 2013 in the V-band — an optical bandpass with a mean wavelength of 540 nm. The supernova had an apparent magnitude of 16.9 +/- 0.1 and coordinates RA = 21:40:38.72, Dec = +06:30:36.98. Using the Sloan Digital Sky Survey (SDSS), they located the host galaxy as the spiral galaxy PGC 067159, which was offset by 3 arcseconds from the source of the supernova. 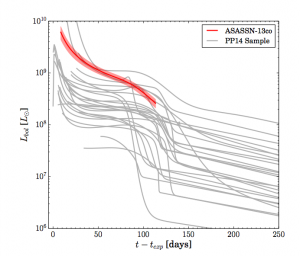 The bolometric (total flux over all wavelengths) light curve of ASASSN-13co in red plotted against the light curves of the supernovae used in making the PP14 model, in grey. The thickness of the red indicates the 1-sigma uncertainty in the light curve. We can see that ASASSN-13co is one of the most luminous supernovae of the bunch and that unlike the other Type II-P SN shown, it does not have a long plateau phase.

After finding that ASASSN-13co had an unusually bright V-band absolute magnitude of -18.1 at the time of detection, they decided to launch an extensive follow-up campaign to fully characterize the event. They obtained photometric observations from space using the Swift X-ray Telescope and UVOT target-of-opportunity observations and from the ground using the Las Cumbres Observatory Global Telescope Network (LCOGTN). Since they do not have prior X-ray data from the host galaxy (and are therefore unable to determine if the X-ray flux comes from the supernova or the galaxy) they ultimately don’t include their X-ray data in the analysis. In addition, they have spectroscopic data from spectrographs located on the LCO du Pont 2.5-m telescope, the MDM Observatory Hiltner 2.4-m telescope, and the Apache Point Observatory 3.5-m telescope.

Finally, the authors also use a new model from Pejcha & Prieto 2014, which they designate as PP14, to calculate the light curve of the SN in the V-band, since they do not have follow-up data in the V-band. The model takes in measurements of the supernova’s flux and expansion velocities to calculate other information about the supernova, such as its light curve in other filters, its luminosity over all wavelengths, and the mass of nickel-56 that it produces. 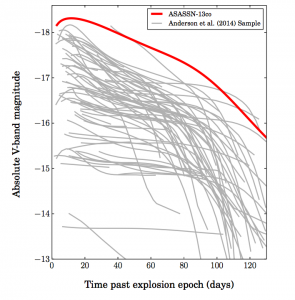 The V-band light curve (in absolute magnitudes) for ASASSN-13co, plotted in red again against a sample of various Type II SN from Anderson et al. 2014. ASASSN-13co has one of the brightest light curves, and it also seems to decline more slowly than the other bright SN light curves.

The spectroscopic data that the authors obtain allow them to determine that ASASSN-13co’s spectrum looks typical for a Type II-P supernova. However, the V-band light curves calculated using PP14 show that the duration of the plateau seems to fall between the values for typical Type II-P and Type II-L supernovae. Unlike a Type II-P, which has a rapid fall and then a long plateau phase, ASASSN-13co displays a steady decline in its luminosity. However, it defies easy categorization by exhibiting a steady decline in luminosity that is considerably slower than the decline of an average Type II-L supernova. On top of that, ASASSN-13co is just unusually bright for a Type II supernova.