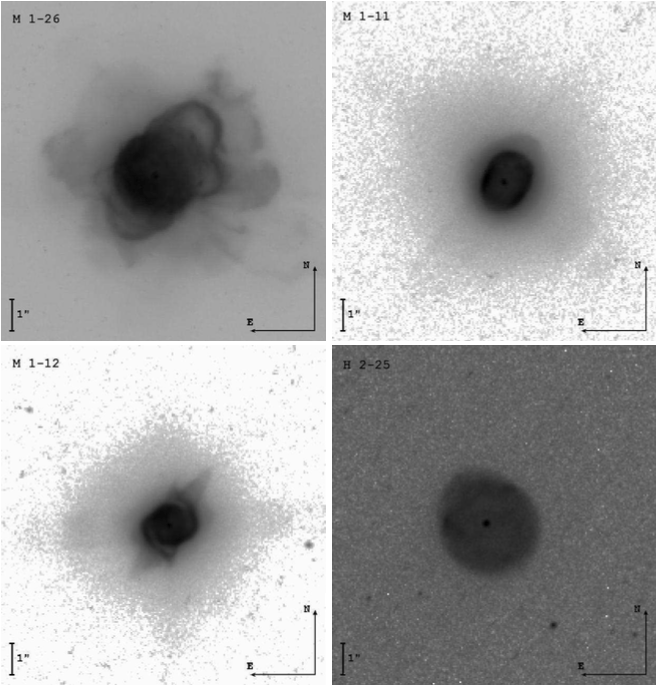 Images of four planetary nebulae taken by the Hubble Space Telescope using a narrow Hα filter. All of these feature hydrogen-rich central stars.

To get an idea of how stars live and die, we can’t just pick one and watch its life unfold in real time. Most stars live for billions of years! So instead, we do a population census of sorts. Much like you can study how humans age by taking a “snapshot” of individuals ranging from newborn to elderly, so too can we study the lives of stars.

But like all good things in life (and stars), there are exceptions. Sometimes, stellar evolution happens on more human timescales—tens to hundreds of years rather than millions or billions. One such exception is the topic of today’s paper: planetary nebulae, and the rapidly dying stellar corpses responsible for all that glowing gas.

All stars similar to our Sun, or up to about eight times as massive, will end their lives embedded in planetary nebulae like these. The name is a holdover from their discovery and general appearance—we have long known that planetary nebulae have nothing to do with planets. Instead, they are the former outer layers of a star: an envelope of material hastily ejected when gravity can no longer hold a star together. In its final death throes, what’s left of the star rapidly heats up and begins to ionize gas in the nebula surrounding it.

Ionized gas is the telltale sign that the central star in a planetary nebula isn’t quite done yet. When high-energy light from a dying star rams into gas in its planetary nebula, some atoms of gas are so energized that electrons are torn from their nuclei. Hotter central stars emit more light, making the ionized gas glow brighter. This final stage of stellar evolution is what the authors of today’s paper observe in real time for a handful of planetary nebulae. 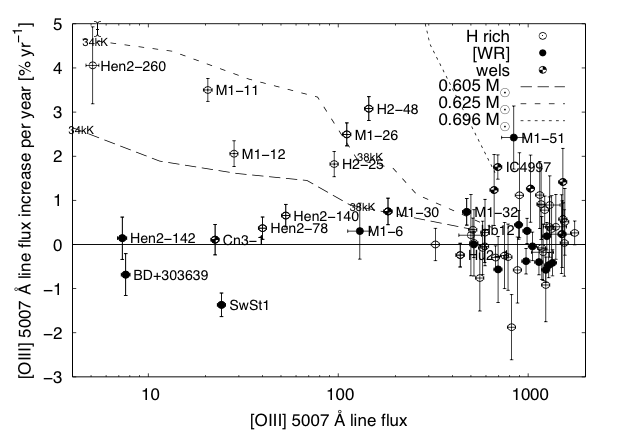 Most planetary nebulae show increasing oxygen emission with time as the central star heats up and ionizes gas in the nebula. The stars are classified into one of three categories based on their spectra. Points indicate the average change in oxygen emission per year, and dashed lines show simple stellar evolution models for stars with final masses between 0.6 and 0.7 times that of the Sun.

The figure above shows how oxygen emission in many planetary nebulae has changed brightness over time. Each point represents data spanning at least ten years and brings together new observations with previously published values in the literature. Distinct symbols assign each star to one of three categories: stars with lots of hydrogen in their spectra (H rich), Wolf-Rayet ([WR]) stars with many emission lines in their spectra (indicating lots of hot gas very close to the star), and weak emission line stars (wels). The fact that most stars show an increase in planetary nebula emission—the stars are heating up—agrees with our expectations. 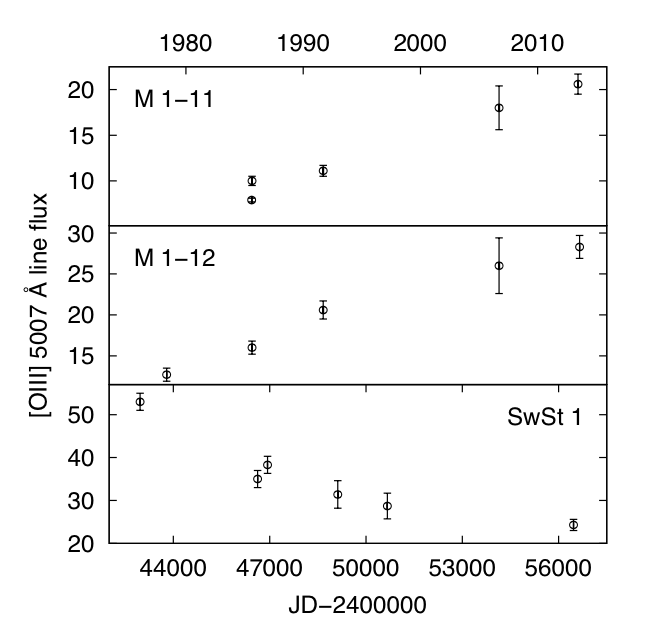 Oxygen emission flux as a function of time for three planetary nebulae over 30+ years. The top two systems, M 1-11 and M 1-12, have hydrogen-rich stars that cause increasing emission as expected. The bottom pane, SwSt 1, shows a Wolf-Rayet star with a surprising decreasing trend.

The earliest observation in this study is from 1978. Spectrographs and imaging techniques have improved markedly since then! While some changes in flux are from different observing techniques, the authors conclude that at least part of each flux increase is real. What’s more, hydrogen-rich stars seem to agree with relatively simple evolution models, shown as dashed lines on the figure above. (Stars move toward the right along the lines as they evolve.) More evolved stars cause oxygen in the nebula to glow ever brighter, but the rate of increase in oxygen emission slows as the star ages and loses fuel.

However, the authors find that some planetary nebulae don’t behave quite as consistently. None of the more evolved Wolf-Rayet systems show increasing emission with time. In fact, one of them, in the bottom pane of the figure to the right, shows a steady decline in oxygen emission! This suggests the hot gas closest to the star may be weakening even as the star is getting hotter, but it is not fully understood.

This unique glimpse into real-time stellar evolution is possible because so many changes happen to a star as it nears the end of its life. Eventually, these hot stellar remnants will become white dwarfs and slowly cool for eternity. Until then, not-dead-yet stars and their planetary nebulae have lots to teach us.